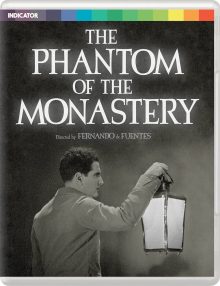 In the late 20s and early 30s, Mexican cinema was struggling to stand apart from its Spanish-language counterparts, with Argentina and Spain dominating the market. To try to find its voice, the Mexican film industry started to explore different genres and allowed its technicians to push the boat out and experiment with different techniques to grab the attention of audiences, who were usually more enamoured by films from elsewhere.

Horror films became very popular at the time, most notably the classic Universal monster movies, such as Frankenstein, The Mummy and Dracula (which had its own Spanish language version shot on the same stages after the English crew had done for each day). Keen to compete, Mexico started to make its own horror movies. Among these were two classics that Indicator have unearthed for release on Blu-ray, La Llorona and The Phantom of the Monastery.

Both titles have only been restored fairly recently, so have long been difficult to get hold of, other than in transfers from poor quality 16mm prints. With original nitrate and acetate prints eventually obtained, however, and a restoration process undertaken (surprisingly part-funded by the George Lucas Family Foundation), the films are now being presented in gorgeous new 4k restorations. 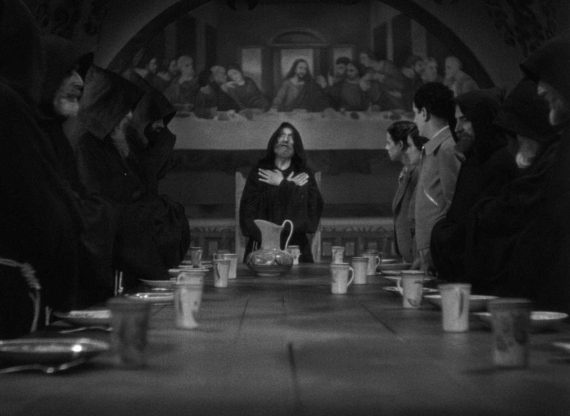 We love classic horror here at Blueprint: Review, so got our hands on screeners of both of Indicator’s releases. George reviewed La Llorona last week and I’m tackling The Phantom of the Monastery, which was made in 1934 and directed by Fernando de Fuentes.

The Phantom of the Monastery opens with a married couple, Eduardo (Carlos Villatoro) and Cristina (Marta Roel), finding themselves lost in the woods one night, along with their friend Alfonso (Enrique del Campo). Not convinced they’ll reach their destination any time soon, they decide to try and find refuge in a nearby monastery that they assume to be abandoned.

Almost as though someone was listening to them, a mysterious figure appears (with his creepy-looking dog) and guides the trio to the monastery, which isn’t abandoned after all.

In fact, there is still a full order of monks living there, devoting their lives to their faith largely in silence, other than the guiding Father Superior (Paco Martinez). He puts the outsiders up for a night, in separate rooms. 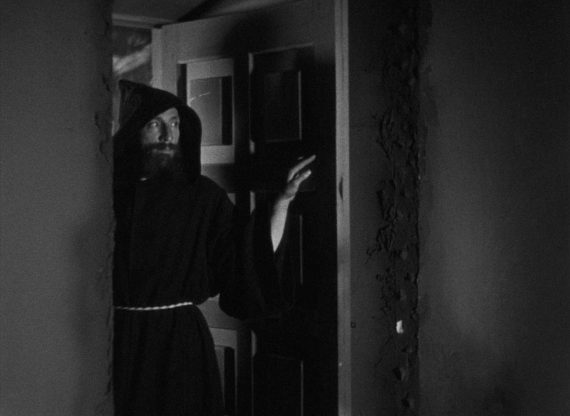 Whilst Cristina and Alfonso, who have developed feelings for each other, consider consummating their sinful relationship, Eduardo tries to talk them into leaving this place as he feels something suspicious is going on.

Indeed, there are strange things afoot, Most notably, there’s a cell that has been barred shut with a giant, well-worn, wooden cross, and strange, unpleasant wails can be heard emanating from it.

The Father Superior tells the group that it was once the cell of the monk Rodrigo, who came to the monastery with a terrible secret. Much like Alfonso, he was in love with his friend’s wife. Only he acted on it, using evil satanic magic that caused the death of his friend. He became a monk to try to repent for this grave sin but the devil came back to reclaim his soul.

Alfonso wants to know if the sounds he heard were those of Rodrigo, so ventures back to the cell one night… 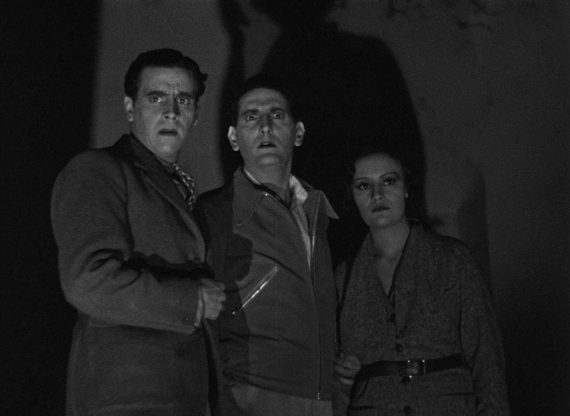 The booklet comments on how “the narrative landscape that he [the author Bustillo Oro] creates in The Phantom of the Monastery is highly original, and the concepts he addresses do not resemble those of Hollywood films”. I’m not sure I’d fully agree with that, as I see the whole affair as a classic haunted house film, even if the setting isn’t quite a traditional one. The Old Dark House had been released two years prior, to great success, and feels like it might have been an influence, not to mention The Mummy, which shares a similar threatening presence.

The Phantom of the Monastery has enough of its own character to not feel like a straight-up copy of any Hollywood horror movie though. For starters, it avoids monsters or mad scientists, who were all the rage at the time. The threat here is more supernatural and uncomfortably ambiguous.

The love triangle aspect, which is heightened by some sort of spiritual force, is a nice touch too. There’s a distinct eroticism within this (Cristina can’t wait to get Alfonso in her room, despite her husband being close by) and the influence of Catholocism is clear with the ‘sinful’ actions of Cristina and Rodrigo seemingly influenced by the devil. 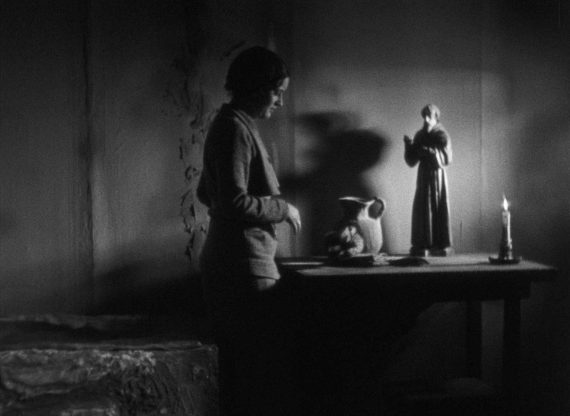 The film’s style is what truly sets it apart though. There are some very nice, smooth camera moves for the time, particularly as Mexico had quite a late-starting industry that was further stalled by the revolution and its aftermath. These camera moves suggest it’s shot on a set but surprisingly the film was largely shot on location (the ancient corpses shown at the end of the film were actual mummified monks too!). These settings provide authenticity as well as a palpable gothic atmosphere, further heightened by some gorgeous high-contrast lighting that tips its hat to the German expressionist horror films of the previous decade.

It’s not just visually interesting though, the film also sounds the part. The ‘talkies’ were still relatively new, particularly in Mexico where the first film with synchronised dialogue had only just been produced 2 years prior. De Fuentes acts as though the process had been around for decades though, with a film that makes wonderful use of sound throughout. The moans of Rodrigo’s spirit are particularly unsettling and a sequence featuring a shrill wind is guaranteed to put a shiver down your spine.

The music is very effective in places too, though I felt it didn’t always fit in certain scenes, overplaying things when a subtler, more suspenseful cue would have done the trick. In scenes such as the first time we see the full congregation of monks, however, the score works like gangbusters. 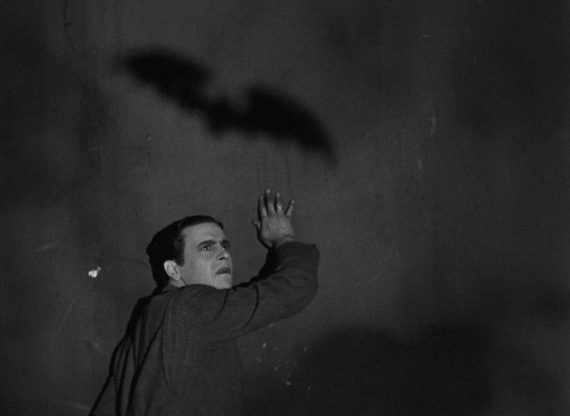 So, whilst, in my opinion, The Phantom of the Monastery owes a debt to the Hollywood horror movies made earlier in the decade, this classic haunted house yarn remains an enjoyably atmospheric experience. The disc is another fine example of Indicator doing what they do best, uncovering lost or forgotten classics and giving them a new lease of life.

The Phantom of the Monastery is out on 21st March on region free Blu-Ray, released by Indicator. There’s some wear and tear on this newly restored print, with a few missing frames here and there and a little damage but, overall, the film looks remarkably good, considering its age and relative obscurity. Similarly, the sound is a bit crackly and music a little thin, but we’re talking early sound era filmmaking here, so you can’t expect crisp, rich audio to show off your Dolby Atmos system.

* Screen grabs have been used throughout this review to give you an idea of picture quality.

There is a handful of special features included in the Limited Edition package too:

– New 4K restoration from the original negative by the UCLA Film & Television Archive in collaboration with the Film Foundation’s World Cinema Project
– Original mono audio
– Audio commentary with genre-film experts, critics and authors Stephen Jones and Kim Newman (2022)
– The Devil in the Detail (2022, 18 mins): Abraham Castillo Flores, head programmer of Mexico’s Mórbido Film Fest, considers the impact of this early horror classic
– Optional English translation subtitles
– Optional English subtitles for the deaf and hard of hearing
– Limited edition exclusive 36-page booklet with a new essay by Maricruz Castro-Ricalde, screenwriter Juan Bustillo Oro on the making of The Phantom of the Monastery, an archival production report, a look at the film’s original promotion, an overview of contemporary critical responses, Jan-Christopher Horak of the UCLA Film & Television Archive on the restoration, and film credits
– World premiere on Blu-ray
– Limited edition of 4,000 copies for the UK and US 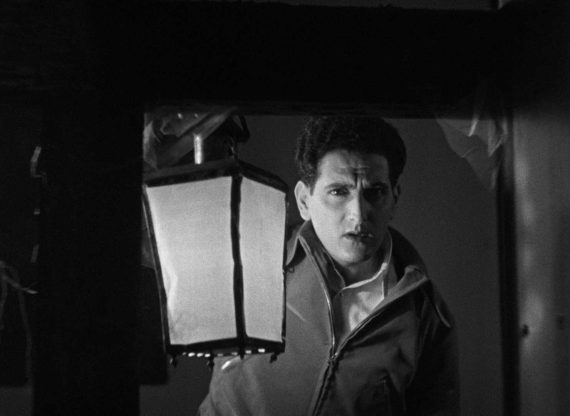 Stephen Jones and Kim Newman’s commentary discusses the history of Mexican horror in general, on top of the film. They hadn’t seen The Phantom of the Monastery before getting involved in this release, which is rare for them. I get a feeling I should have picked up La Llonora and watched that first to get a fuller story, as they recorded that commentary before this and make reference to it in places. It’s still a fascinating track though, on its own, that helps explain why the film is a curious little gem.

Abraham Castillo Flores’ piece is excellent. He provides important context to the film and early Mexican horror movies. It’s required viewing to better appreciate where the film came from and what it later inspired.

The booklet is superb too, offering detailed background to The Phantom of the Monastery, which is vital in a case like this where the film is little known. Remarkably, there’s a lot of first-hand material here, including an interview with one of the screenwriters (albeit written many years later), a production report, a promotional piece and some contemporary reviews. These are all impressive finds for such an old and obscure title.

So, another strong release from Indicator. There aren’t a lot of extras, but they’re all valuable additions. The booklet is particularly interesting, so be sure to pick up the Limited Edition version, while you still can.