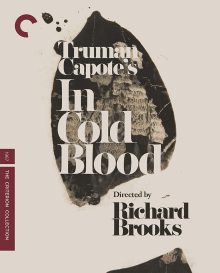 In 1965, author Truman Capote released what is often thought of as his masterpiece, In Cold Blood. It was a ‘non-fiction novel’ (with Capote claiming it was the first of its kind, though this is debatable) that examined the case of the murder of the Clutter family in Holcomb, Kansas in 1959 but presented it in the style of a fictional novel, rather than the dry ‘true-crime’ books that had come before.

Capote spent 6 years researching and writing the book, spending a great deal of time in the town of Holcomb, interviewing locals and investigators as well as, most importantly, speaking to the killers, Richard Hickock and Perry Smith, who were arrested six weeks after the murders.

The book, when released, was a sensation. Readers were enthralled by this detailed, realistic account of the crime, and its literary approach of intercutting between the victims, killers, investigators and other locals.

So, aided by the success of the screen adaptation of Capote’s earlier story, Breakfast at Tiffany’s, it didn’t take long for Hollywood to come knocking.

Richard Brooks was the writer/director brought on to transfer Capote’s novel to the big screen. The pair shared a friend in Humphrey Bogart and Capote respected Brooks’ reputation for striving for realism in his work, so was happy for him to take on his hit novel. The author seemed pleased with the results too, even if he had a few slight issues here and there, as one does when your work is taken from your hands and adapted into another form.

The film did well at the box office and found critical favour too, even picking up four Oscar nominations for Director, Original Score, Cinematography and Adapted Screenplay. It has also since been regarded as an important early film in the ‘new realism’ movement in Hollywood.

With near-universal praise for the film then, In Cold Blood is an obvious fit for the Criterion Collection and in April it’s being released by the label in the UK. I was sent to investigate.

Sticking fairly close to the book, Brooks’ film portrays the build-up to the Clutter murder, the act itself and the aftermath, telling much of the story from the perspective of one of the killers, Perry Smith (played by Robert Blake). He and Richard Hickock (Scott Wilson) are not long out of prison and meet in Kansas with the intention of raiding the home of the wealthy farmer Herbert Clutter (John McLiam), who a fellow prisoner claimed has a safe that’s always loaded with cash.

Hickock repeatedly states the plan is to “leave no witnesses” but it’s subtly suggested that Smith sees this as bluster. As we learn more about Smith though, we see that he’s a troubled soul that might have killed before and, as we all sadly know, the pair end up sticking to the plan, killing the whole family, possibly due to the fact the promised safe did not exist.

Like the book, the film has a reputation for being very realistic. Brooks, backed up by Capote, was adamant on shooting in black-and-white, which was the norm for documentaries at the time, and insisted on using largely unknown actors instead of the big-name stars suggested by the studios (Paul Newman and Steve McQueen were originally touted for the central roles). Brooks took this approach to further extremes by shooting at many of the actual Kansas locations, even going to the extent of filming the murders in the actual Clutter family home. A number of cameo appearances are made by actual people involved in the case too, including seven of the original jurors in the courtroom scene.

The stark black and white photography reflects this realism to an extent, though it is also highly stylised, making striking use of light and shadow and artful composition, courtesy of the great Conrad L. Hall.

The editing is quite radical too. There are many clever match cuts and even a bold ‘crossing-the-line’ edit (basically, placing characters on a different side of the screen than they have been previously in the sequence) during the interrogation scene. The first act is particularly interesting, from an editing perspective, as it frequently intercuts between the two murderers and the lives of the Clutters without immediately making it clear how all these characters fit together.

Also standing out in terms of style is Quincy Jones’ score. His jazz background is put to great use but this is not a cool, danceable, easy-listening soundtrack, by any stretch. It’s an abstract, unsettling score that perfectly reflects the darkness of the subject matter and psychological complexity. Though Capote was, reportedly, not keen on Jones being hired to score the film, he changed his mind after hearing his work and the soundtrack went on to be nominated for Best Original Score at the Oscars the following year.

The only cues I weren’t keen on were those accompanying the early scenes showing the Clutter’s family life, which sounded a little overly sappy and cliched in comparison to the more avant-garde tracks elsewhere.

Though staying fairly true to the book, Brooks did choose to spend less time with the Clutters in his adaptation, as well as in the courtroom, which takes up a good portion of the book but only a few minutes of screen time here. Instead, Brooks keeps the focus largely on the killers and what made them tick, whilst occasionally cutting over to the police as they try to figure out who committed the crime.

Speaking of ‘the crime’, the horrifying act is expertly handled. The sequence is held back until later in the film, after we’ve seen the killers arrested (another example of its interesting editing). The murder scene, when it comes, doesn’t graphically show any violence but feels shockingly brutal through its rhythm and editing. The sequence starts slow and quiet, racked with sickening tension as we know exactly what’s going to happen, before exploding once Perry finally snaps.

Reflecting Capote’s novel, Smith is shown as a much more sympathetic character than Hickock. He’s given hints of a tragic backstory and we break out of the gritty realism of the film at times when we see flashbacks to this past. This helps us understand a little of what might have driven the young man to kill these innocent people. Hickock is shown as more of a psychopath, with a wicked charm and a gleefully boastful attitude towards his crimes. When the murders are finally shown and we see Smith as the main instigator of these, it’s a shock to the system and suggests Hickock was all mouth whereas the quietly disturbed Smith was the one we should have been keeping our eyes on.

The film’s final act concerns the pair of killers waiting to be executed. In this section, it comes across as a statement against the death penalty, aided by the sympathy we’d built for Smith prior to this. Having been shown the crimes in a shockingly up-front fashion though, it’s not played out as a simple damnation of capital punishment.

Overall then, In Cold Blood is a finely crafted examination of a vicious, senseless crime and its repercussions. It also manages to find a glimpse of humanity among an inhuman act, whilst never excusing what happened. As such, it’s a thought-provoking and powerful piece of filmmaking that still has quite an impact several decades later.

In Cold Blood is out on 4th April on Blu-Ray in the UK, released by The Criterion Collection. The picture quality is top-notch, with a sharp and detailed image. I’ve used stills from the disc throughout this review, though please note, they have been compressed for online use. The audio is crisp too, with the music coming through particularly nicely.

– New 4K digital restoration, with 5.1 surround DTS-HD Master Audio soundtrack on the Blu-ray
– New interview with cinematographer John Bailey about director of photography Conrad Hall’s work in the film
– New interview with film historian Bobbie O’Steen on the film’s editing
– New interview with film critic and jazz historian Gary Giddins about Quincy Jones’s music for the film
– New interview with writer Douglass K. Daniel on director Richard Brooks
– Interview with Brooks from a 1988 episode of the French television series Cinéma cinemas
– With Love from Truman, a short 1966 documentary featuring novelist Truman Capote, directed by Albert and David Maysles
– Two archival NBC interviews with Capote: one following the author on a 1966 visit to Holcomb, Kansas, and the other conducted by Barbara Walters in 1967
– Trailer
– English subtitles for the deaf and hard of hearing
– PLUS: An essay by critic Chris Fujiwara

The Conrad Hall piece does a fine job of dissecting the DOP’s work on In Cold Blood, as well as comparing it to other films he shot.

Bobbie O’Steen’s essay gives a fascinating breakdown of some of the editing techniques used to tell the story. It’s an excellent piece, though I wish it were a little longer.

Douglass K. Daniel’s Richard Brooks piece gives a potted overview of the writer/director’s career, spending much of the time looking at In Cold Blood itself and Brooks’ approach to the source material. There’s an archive interview with the director on the disc too, which is not long but gives a taste of him as a person and his feelings on In Cold Blood.

The piece on Quincy Jones’ music examines the score in great detail, giving rather technical reasons why it is effective and unique. Some of the terminologies may go over some people’s heads but I found it fascinating.

I appreciated the inclusion of several archive clips and documentaries featuring Truman Capote too. He’s an excellent interviewee, giving some fascinating insight into his life and work. Of particular interest to me was the half-hour documentary shot by the Maysles brothers. The short news piece also provides a brief look at how those living in Holcomb felt about Capote’s book.

So, a well-rounded collection of material to back up an excellent film. An easy recommendation.