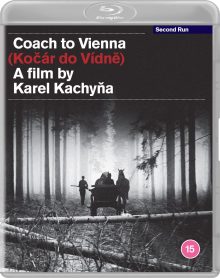 After the uncharacteristically ‘safe’ Fetters in 1961, director Karel Kachyna and writer Jan Procházka collaborated on a series of provocative films throughout the rest of the 60s that took unvarnished, questioning views of recent Czech history.

Whilst many writers and directors at the time had been silenced or held back from producing ‘dangerous’ work like this, Procházka had largely got away with it due to having a strong background in the Communist party and close friends in high places, including party First Secretary and Czech President, Antonín Novotny. In fact, Coach to Vienna (a.k.a. Kočár do Vídně or Carriage to Vienna) was almost shut down during production for its controversial politics, but Novotny intervened.

This uniquely protected position came to an end after the 1968 invasion of Czechoslovakia, when Procházka’s status diminished and the pair’s film The Ear clearly took a pot shot at the powers that be. Procházka was fired from Barrandov Studios and subjected to a smear campaign. He sadly died of cancer not long afterwards, in 1971.

Kachyna managed to keep working though, as his films’ political issues were blamed on Procházka. The studios were short on decent directors too, so they kept him on, though under tighter control. His films had less bite during this time, but some are still highly regarded and Kachyna enjoyed a long and respected career up until his death in 2004.

Following their release of The Ear back in 2019, Second Run are turning to another Kachyna and Procházka collaboration, with Coach to Vienna receiving their first-class treatment on Blu-ray this month. I got on board and my thoughts on the film and disc follow.

Coach to Vienna opens with a caption explaining that the husband of Krista (Iva Janzurová) has been hung for a trivial crime (stealing cement) by the German forces controlling the area. When she is forced to transport two Nazi soldiers, Hans (Jaromír Hanzlík) and the badly wounded Günther (Ludek Munzar), on her horse and carriage, she sees this as a chance to get revenge.

As the trio travel through the woods, we see that Hans is actually quite an affable person who’s frightened rather than aggressive or cruel, as Nazi’s tend to be depicted. It’s Krista with evil plans on her mind, as she sneakily offloads the soldiers’ weapons, hoping to make them unarmed so she can kill them with the axe she keeps stored under the carriage.

Due to this approach of subverting the idea of who the ‘good guys’ and ‘bad guys’ are in war movies, the film didn’t go down well on its domestic release, with critics claiming it was anti-Czech. Most difficult to stomach was the finale, which casts Czech partisans, usually seen as legendary heroes in the country, as the most villainous characters in the film. Procházka and Kachyna wanted to show that such situations aren’t as simple as good versus bad and to get across the message that everyone is capable of horrific acts in times of war and that people on all sides are only human. Most didn’t see it this way though and the film was soon withdrawn from circulation during the time of ‘normalisation’.

Watching it now, it feels like a more realistic depiction of what life was like during wartime, rather than the heroic, flag-waving antics of more propagandist films made on the subject. In fact, the partisans are known to have performed some horrific acts during the war, so shouldn’t be untouchable.

The decision to set the story up merely through expository text at the start of the film is perhaps another technique used for this subversive aim. The original script included some preliminary scenes of Krista’s husband’s death but Kachyna chose not to shoot them. This helps keep us from unquestionably siding with Krista and avoids painting Hans as a villain. It also keeps everything claustrophobically confined to the woods.

Due to this, the film has an almost stage-like feel, despite the continuous movement and exterior location shooting, due to the small cast and intimate nature of the drama. The woods and the ever-present mist give the film a distinctly gothic atmosphere too. The organ-heavy music, reminiscent of religious requiems, adds to this.

The woods become almost another character, their presence is so felt in the film. They’re shot beautifully too, with some floating camera movements adding to the unsettling atmosphere.

It’s a film that’s pared down to a great degree, keeping plot and characters to a bare minimum. However, aided by a short running time (just under 80 mins) and well-sustained tension, it’s a riveting watch.

The use of language is interesting in the film too. It’s never quite clear whether or not Krista understands Hans, but she keeps quiet through most of the film, refusing to communicate with the soldier she longs to kill. The only openly common language is a strange trilling noise used to stop the horses. This is implemented very effectively throughout the film, linking Krista with the nature surrounding the trio and providing a trick she tries to use to hinder and later help Hans.

Overall then, Coach to Vienna is a stripped-back, tense and humanistic take on the war movie. Bravely taking no sides and gripping in its surface simplicity, it provides a stark reminder that the people caught up in conflicts on any side are all only human. It’s an important message, particularly in times like these.

Coach to Vienna is out on 28th March on region-free Blu-ray, released by Second Run. The picture is a touch soft perhaps and some detail is lost in the blacks (possibly as intended) but overall it’s quite a pleasing transfer. I’ve used screen grabs throughout this review to give you an idea of picture quality, though these are compressed. The audio seems solid too, with the score coming through nicely, in particular.

The Projection Booth team provide another characteristically enthusiastic and well-researched commentary track that digs deep into the film’s background and many qualities.

I was excited to see a feature-length additional film included on the disc but, unfortunately, It’s Not Always Cloudy is no Coach to Vienna. Playing out like a propaganda piece, praising the hard work the common folk do when they work together to redevelop Moldova, it’s a pretty tedious affair. It’s attractively shot at least, has some cute touches and, as a graduation film, it’s impressive I guess, but it’s a bit of a slog to get through.

The booklet is superb, as usual, offering a decent amount of background on Kachyna and Procházka as well as a detailed dissection of the film itself.

So, whilst I wasn’t a fan of It’s Not Always Cloudy, its inclusion is still impressive as an extra feature, and the commentary and booklet are as excellent as always. So it’s still easy to endorse Second Run’s release of Coach to Vienna.