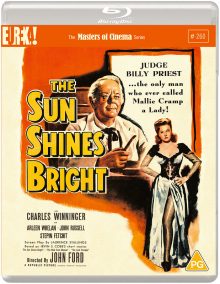 Known for being a bit of a cantankerous sort, John Ford didn’t often give straight answers in interviews. On the question of what the favourite of his films is, for instance, he gave different answers over the years. It is, however, believed (at least in the press material and extra features for this release) that one of the most likely candidates from various accounts is the 1953 film, The Sun Shines Bright.

Out now on Blu-ray, released by Eureka as part of their Masters of Cinema series, The Sun Shines Bright saw Ford revisit Irvin S. Cobb’s ‘Judge Priest’ stories, which he’d already mined to make his 1934 film Judge Priest. It’s not often a director, particularly one as well regarded as Ford, remakes his own work but he felt disappointed that he wasn’t allowed to adapt the stories exactly how he wished back then. Most notably, the studio hadn’t let Ford include a story about how Priest held off a lynch mob out to get a young black man. This time around, producing the film independently through Republic Pictures, the director was able to include this and, clearly, he was happier with the result.

Republic did still cut some of the film though, unfortunately. The lynching remained untouched but, in an interview, Ford claimed some of the “climatic scenes” (i.e. atmospheric scenes, not to be confused with climactic) with the black characters. Thankfully, those cuts have since been reinstated and this Blu-ray contains the full 101-minute version of the film. 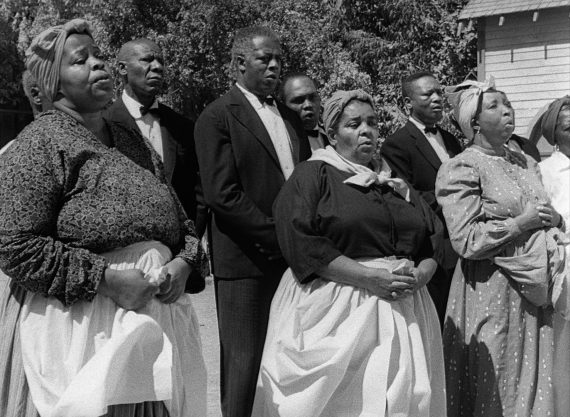 Being based on a series of short stories, The Sun Shines Bright has a fairly episodic structure, though screenwriter Laurence Stallings does a good job of tying these strands together into a cohesive whole.

It’s all set in the late 1800s (post-Civil War), within a close-knit community in a small town in Kentucky, of which William Pittman Priest is the judge. One of the key threads concerns the beautiful young lady, Lucy Lake (Arleen Whelan). Certain figures in town, including Priest, are aware that she’s actually the daughter of a prostitute (Dorothy Jordan) who, in turn, was the disgraced daughter of the local dignitary General Fairfield (James Kirkwood). Lucy is unaware of this, as Fairfield refuses to admit it, for his and her reputation. This all comes to a head when Lucy’s dying mother reappears in town, wanting to see her daughter one last time.

Lucy, meanwhile, has an eye on the not-so-reputable Ashby Corwin (John Russell), who has just returned to town after a long absence and takes a shine to her himself.

Another strand of the film, alluded to earlier, sees U.S. Grant Woodford (Elzie Emanuel), a young black man, accused of raping a young white girl. When a lynch mob arrives to murder U.S, Priest attempts to calm the group and give the man a fair trial.

All throughout this and other less pivotal episodes, Priest is on the campaign trail, attempting to hold his position as town judge. His moral stance on these contentious local issues places his standing on shaky ground though. 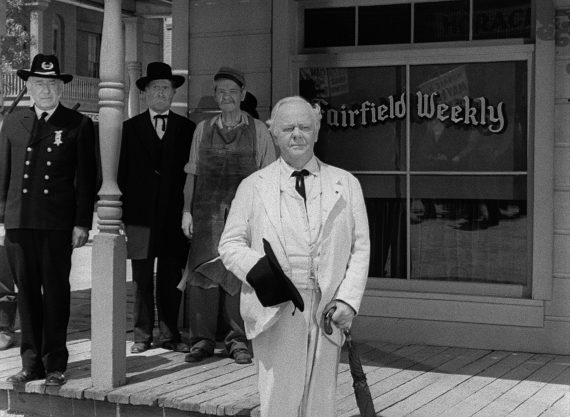 I wouldn’t class The Sun Shines Bright as my own personal favourite of John Ford’s films, but this lower key and lesser-known entry to his canon is certainly of merit.

I took a little while to get my head around the story, to be honest, with so many characters and strands, and Ford and Stallings avoiding too much clear exposition (partly due to the Production Code, I imagine, with regards to the nature of Lucy Lake’s heritage). So I was set on an uneasy footing to begin with, though everything comes together as the film moves on and I found myself quite caught up in the story by the end.

Another side of the film that had me jumping between damning and praising it was its depiction of black people. The black characters in the film are often offensively stereotypical, with Priest’s servant Jeff (Stepin Fetchit, one of the first black stars, but now a controversial figure) particularly dopey and much of the rest of the black cast wide-smiling, banjo-playing cotton pickers. However, having such a large black cast and never ignoring their great presence in the town could be seen as quite progressive at the time. The film was made a couple of years before the Civil Rights Movement really kicked into gear, so the US hadn’t yet made many solid steps forward. 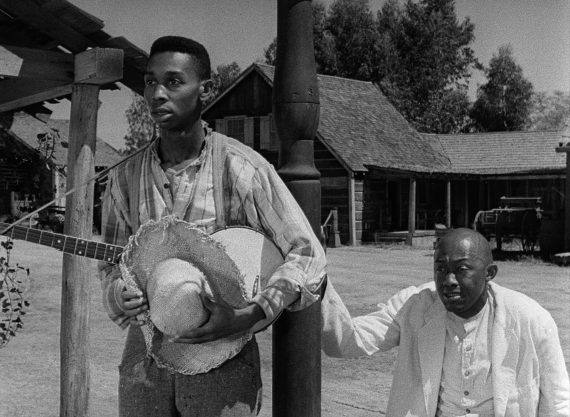 It’s certainly forward-thinking in our hero treating them fairly too. Nowadays this could be criticised as being a “white saviour” narrative but, for the time, Priest’s standing up for the black community can be seen as commendable. Priest’s relationship with his manservant Jeff is particularly interesting too, even if his depiction is painfully broad. Though Priest calls him ‘boy’ and the character is a clear stereotype, Jeff is an important part of the judge’s team and even utters the line “me and the judge ain’t never going to get any votes now” (I’m possibly paraphrasing – I jotted it down in a hurry whilst the film was running), showing how closely bonded the pair are.

Going back on the other side of the fence though, there’s no mention of slavery, everyone seems to have black servants and our hero is part of a band of former Confederate soldiers, who are still proud of their past and roles in the Civil War, continuing to harbour grudges against the Union. Nothing is mentioned about the problematic aspects of the Confederate side of the conflict. With the black members of the community all in lowly service positions and the men referred to as “boy”, little much seems to have changed since the war, in fact. 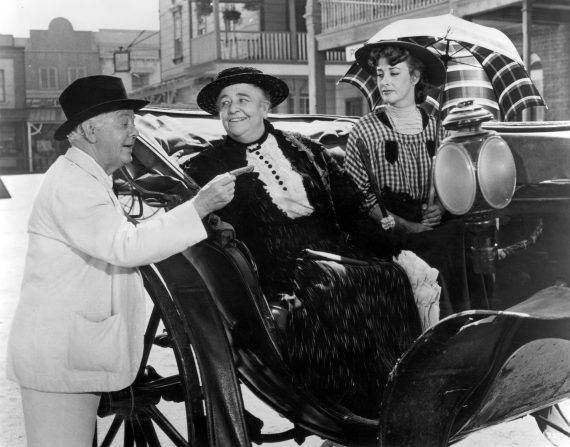 As mentioned, much of this can be dismissed to an extent as the world wasn’t particularly illuminated when the film was made. Some aspects speak very much to the current climate though. The film is set during a time when America was divided and plays on this idea a great deal, which makes it especially relevant now with such strong political conflict prevalent across the western world.

Away from any political and racial aspects of the film, I enjoyed The Sun Shines Bright for its sense of community. Ford can often paint his characters a little larger than life and that’s certainly the case here, but enjoyably so (away from the aforementioned racial stereotypes of course). Using slightly clichéd figures helps tell the story more efficiently when setting the scene and the cast is strong enough to make the characters work.

Being directed by Ford, the film is also filled with some beautifully conceived but never overly showy compositions, such as when Priest walks through a dimly lit hall after giving the flag he’d ‘borrowed’ back to some Union soldiers. There’s a lovely use of light and frames in the final shot too, which has something of The Searchers in it. 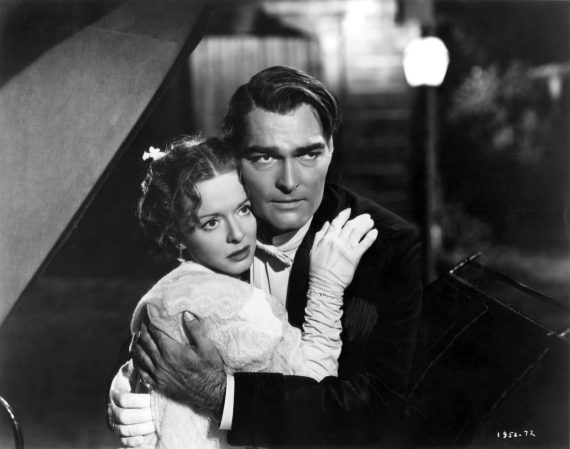 I also enjoyed the mixture of light comedy and occasionally quite powerful drama. There are some genuinely amusing scenes, such as when Priest and his cohort of hard-drinking Confederate buddies are forced to drink lemonade at a temperance event, as the Judge knows a good show there would influence the votes of the temperance ladies’ husbands.

Contrasting this is the lynch mob sequence as well as a deeply moving climactic scene that sees Priest lead a funeral procession for Lucy’s mother.

So, though I wouldn’t call it one of Ford’s masterpieces, it remains a rousing yet lightly enjoyable yarn about justice and tolerance. Made with the director’s usual fine craftsmanship though also with a little of his sentimentality, it’s not subtle and a little rushed and cluttered in its first half, but wins you over as it rolls on.

The Sun Shines Bright is out now on Blu-Ray in the UK, released by Eureka as part of their Masters of Cinema series. The picture is impressively sharp and detailed for its age, with a lovely natural grain. There are some tiny white flecks here and there but these are barely perceptible (I always watch films on a large projector screen, if that makes a difference). The sound is robust too.

Joseph McBride’s commentary is excellent. It’s well researched and fascinating, providing mainly historical background to the production and setting as well as some analysis. He makes some interesting points about Stepin Fetchit’s performance and also includes a clip from an interview McBride had recorded with Ford himself shortly before the director’s retirement.

As usual, Tag Gallagher’s video essay uses clear visual examples to explain his very technical dissection of the cinematic language of the film. His essays can feel dry and obsessively detail-orientated but they act as mini film making/studies masterclasses. This particular essay also does a great job of highlighting Ford’s beautiful compositions.

The booklet here is even more crammed with content than usual. Production stills are largely eschewed to make room for a dense amount of text. A nice touch is the inclusion of one of the original Judge Priest short stories, plus you get two thoughtful essays on the film.

Overall then, it’s a well-compiled release that Ford fans owe it to themselves to pick up.