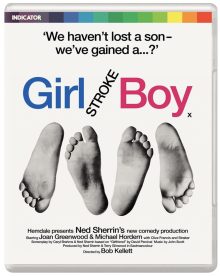 No one does social awkwardness quite like the British. From Fawlty Towers to The Office, Abigail’s Party to Four Weddings and a Funeral, our inability to deal with unexpected or uncomfortable social situations has been very well documented, with hilarious (and sometimes tragic) results. Girl Stroke Boy, a comedy drama from 1971 and one of the four films Indicator are releasing as part of their opening salvo of Blu Ray releases for 2022, presents us with another example of the British middle class inwardly shrivelling at an uncomfortable social situation. Yet the film contains at its heart a portrayal of gender identity and sexuality that makes it stand out from the crowd to emerge as one of the most liberal and forward thinking British films of the early 1970s.

Based on a stage play by David Percival, Girl Stroke Boy’s set up is very simple – perhaps the easiest way to describe it would be a British take on Guess Who’s Coming to Dinner – but with an added twist. Middle class couple Lettice (Joan Greenwood) and George (Michael Hordern) have prepared a dinner party to welcome home their son Laurie (Clive Francis) and his new West Indian girlfriend Jo (Peter Straker). Lettice is feeling particularly smug about her open minded, liberal attitude regarding the race of Laurie’s partner, yet when the young couple finally arrive, Jo’s androgynous appearance causes shock and confusion… 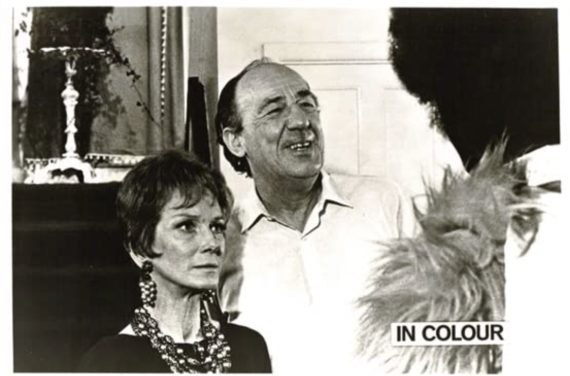 Confined to a single location and mainly dealing with just these four characters (although there is an appropriately amusing cameo from Keeping Up Appearance’s Patrica Routledge as well as the great but underused Rudolph Walker) Girl Stroke Boy occasionally struggles to escape from its theatrical origins. Joan Greenwood in particular feels occasionally out of place, with her performance and delivery frequently feeling far more suited to the stage than the screen. Some of the dialogue also rings with that peculiar brand of theatrical artificiality, which clashes with the naturalism seen elsewhere. Thankfully, director Bob Kellett infuses the film with enough creative technique, including the use of close ups, tracking shots and long, dexterous takes, to ensure that Girl Stroke Boy doesn’t become a dry stage adaptation. 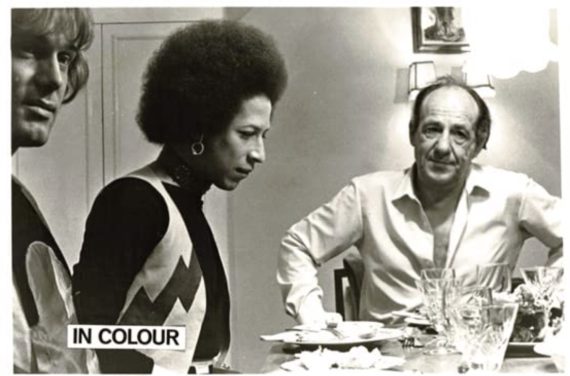 The performances throughout the film are equally impressive. While Joan Greenwood can, as mentioned, be a little too theatrical, her overall performance as Laurie’s overbearing and bigoted mother is a success, grating the audience in all the right places. Clive Francis probably has the least impactful role here, but, to be fair, he is given the least to work with, whereas Michael Hordern and Peter Straker frequently steal the show. Hordern is particularly impressive, brilliantly conveying a character whose heart is most certainly in the right place while desperately trying to please everyone. In fact, the character of George is one of the most refreshing in the film. While Girl Stroke Boy brilliantly casts aside expected stereotypes in regards to Jo and Laurie, it is also wonderful to see a depiction of an older, middle class man from the early seventies being so forward thinking and open mined in understanding that as long as his Son is happy and in love, then, no matter who his partner might or might not be, he is going to be happy too. 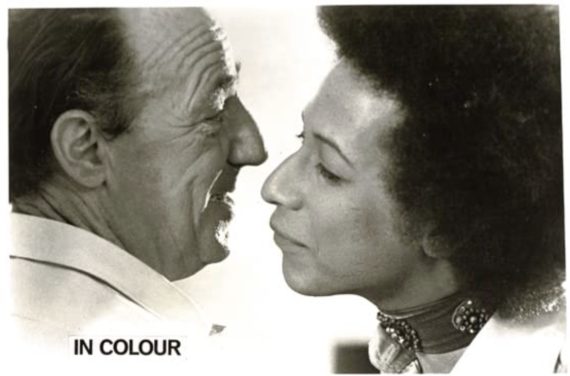 Girl Stroke Boy’s most groundbreaking moments, however, belong to Peter Straker and the depiction of Jo. As film historian Alex Davidson rightly points out in the extras, it is vital to remember when watching Girl Stroke Boy that homosexuality had been decriminalised in England in 1967, only four years before the film came out. To have characters such as Jo and Laurie portrayed as they are in Girl Stroke Boy therefore feels both brave and pioneering; however, the shock of Jo’s appearance might have been lessened slightly for a contemporary audience as the film was released at a time that was seeing also significant changes in the rock and pop scene, where androgyny was beginning to be pushed to new heights through the glam rock movement and figures such as Marc Bolan and David Bowie.

Yet the film’s masterstroke and greatest achievement isn’t just in openly showing homosexual or transgender characters. It is how the film treats them that feels most remarkable. Jo and Laurie are allowed to be a loving, inter racial couple with no judgement, vilification or scorn. They kiss, lie in bed together, attempt to have sex and, in the film’s most wonderfully romantic moment, play in the snow (beautifully filmed by Kellett in striking silhouettes). Girl Stroke Boy’s goal is to make the audience simply accept Jo and Laurie for who they are, reflected in the fact that this is exactly how the film treats them from the first frame to the last. The fact that this came out in 1971, now more than fifty years ago, makes it feel all the more remarkable. 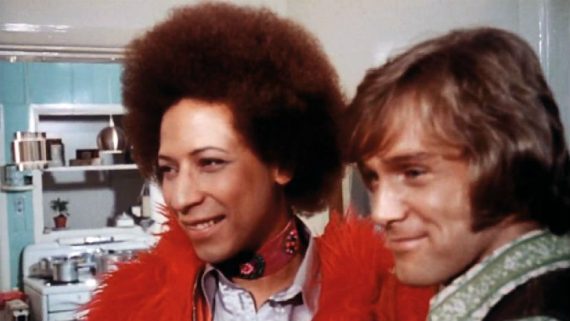 Yet a film cannot survive just on moral kudos alone. While Girl Stroke Boy certainly breaks ground in many respects, in others it is far more run of the mill. A rather dry comedy of manners that at times feels as dated as it does fresh and modern, the film never achieves any significantly deep character insights or great comic moments. The cast keep things ticking along nicely and the script has enough to pace and humour to ensure that things don’t go stagnant, but overall, Girl Stroke Boy fails to be that memorable or interesting outside of its admittedly groundbreaking character depictions – unlike, say, John Schlesinger’s Sunday Bloody Sunday, a contemporary film also released in 1971 that successfully managed to combine pioneering depictions of homosexuality with a powerful and memorable narrative.

There are more than enough ingredients in Girl Stroke Boy to have created a story every bit as memorable and significant as the characters it portrays and it is a shame that it doesn’t fulfil its potential in this regard. Regardless of that, however, it is still fantastic that Indicator have brought this historically important film back into the public spotlight where it rightly belongs. While you feel like it is a film destined  to be remembered and studied more for its progressive depiction of minority characters than for anything else, it is still an amusing and wonderfully performed tale that adeptly captures that very British sense of middle class social awkwardness. For anyone with an interest or passion for 70s British cinema, or LGBTQ cinema in general, then Girl Stroke Boy comes highly recommend.

Girl Stroke Boy is released on the 17th January via Powerhouse Films on their Indicator Label. This edition is based on a 4K scan of the surviving film elements (please don’t use the pictures used here as a basis to judge the picture quality!). While the picture may not be quite as pristine and sharp as similar films of this era, Indicator have still done a fantastic job considering what they had to work with. The picture quality throughout is sharp and detailed and, while the picture might appear a little less rich and saturated in places, it is still a very, very good presentation. Audio is likewise clean and clear.

The extras on the disc are as follows:

As Simple as That: Peter Straker is a fun and jovial interviewee. Although his interview is only 13 minutes long, he offers  amusing and engaging reminisces about his time working on the film, candidly recalling his nervousness about the part and the few difficult moments he had on set, all of which were helped to be offset by the freedom provided him by director Bob Kellett.

Ahead of its Time: Film curator and historian Alex Davidson provides a twenty minute critical appraisal of the film, which is a great watch and really helps to contextualise Girl Stroke Boy, explaining why it was so groundbreaking and important.

John Scott Interview: The meatiest extra here is a gargantuan interview with film composer John Scott. Running just under an hour and forty minutes, it exhaustively covers all accepts of his career. I’ll hold my hand up and admit I actually hadn’t heard of John Scott before watching this (although I certainly had heard some of his scores, as I’m sure you would have too) but this still proved to a really interesting interview. It lacks a bit of production value (it is just one shot throughout, broken up with some subject titles) but Scott offers such interesting anecdotes and stories, this ceases to really matter. For anyone with an interest in film composing or the musical film scores of the 60s/70s, this is an absolute gem.

A Couple of Beauties: If Girl Stroke Boy is the British answer to Guess Who’s Coming to Dinner, then A Couple of Beauties must be the British answer to Some Like It Hot. Some of the acting is rather wooden but overall this is a totally fun and amusing half hour that acts as a wonderful time capsule back to 70s Manchester. Definitely worth a watch!