If you’re struggling to come up with Christmas present inspiration for film-loving family and friends or if, like me, your wife/husband no longer wants to add to your unnecessarily large Blu-ray collection so you need different gift ideas to suggest, Scalextric have got your back!

For the festive season, the company, whose beloved racing playsets have proved popular for decades, are releasing a handful of film-related cars and track sets. These include the souped-up time machine DeLorean from Back to the Future Part II, a Batman vs Joker racing set and, to celebrate the long-awaited release of No Time To Die, a set featuring the Aston Martin DB5 and Jaguar XF from the film.

I was lucky enough to be sent the DeLorean and an Urban Rampage track set to test drive it on, so I thought I’d see how it shaped up. 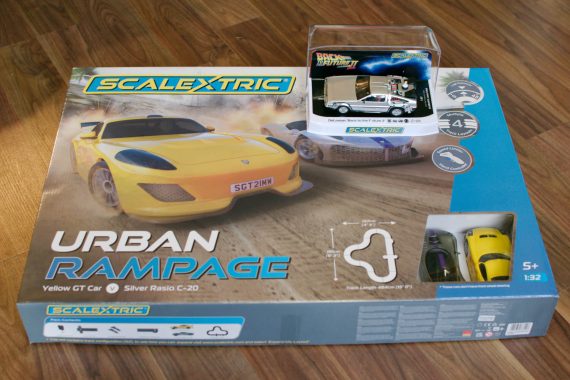 The DeLorean is beautifully designed, offering a faithful and detailed recreation of the iconic car (though it doesn’t fly like in the film). It even has a little model of Marty McFly in the driver’s seat which is a nice touch. There are also front and rear lights that come on when the car is in motion, making it stand out against more basic models.

The car is nicely presented in a sturdy plastic case which will appeal to collectors who want it on their shelf rather than on a track, but I soon had it out to play with my kids.

I’ve got two girls, aged 5 and 7, and they loved the set. They’ve never played Scalextric before and it went down a treat. They were soon able to master the fact they couldn’t just blast around at top speed all the time, so we had plenty of close races (and several arguments, as expected). We’ve had several hours of play out of it already over the past 3 or 4 days, so it shows you can get great value out of the set. 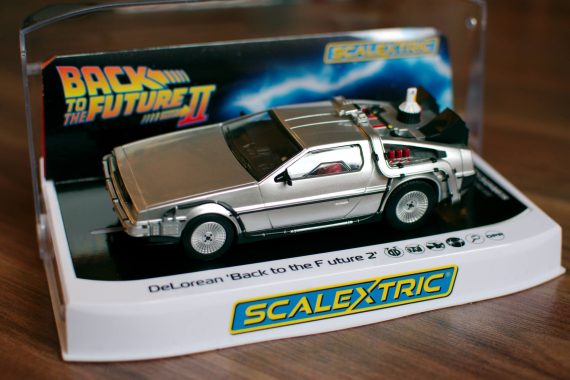 I don’t know if it’s just the fact it looks cool but, when playing with the set over the weekend, I always leaned towards using the DeLorean over other cars and felt it was easier to control at higher speeds than the others.

The DeLorean is a standard-sized (1:32 scale) car for standard track sets and, as usual, you get spare connections, which can easily be replaced with those on the car, should they get too frayed. They’re the standard connections too, so any can be picked up and used if you run out or lose the ones provided. Mine haven’t worn out yet but I did have to flatten them out and remove some dust to keep the car running, though this is common with Scalextric cars. 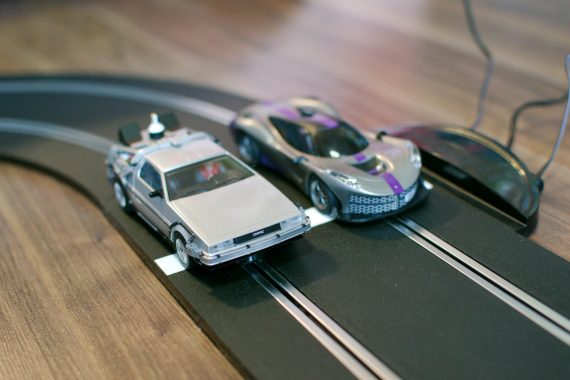 I didn’t receive the James Bond or Batman vs The Joker sets to comment on those, but I’ve been informed they’re Micro-Scalextric sets containing over four metres of track, with 9 track layouts and a loop-the-loop (plus a half-pipe on the Batman set). Like with the Urban Rampage set I got, the controllers have speed-limiting options, for those that get a bit heavy-handed.

So, the Back to the Future II DeLorean gets the Blueprint: Review seal of approval and the other two film-themed Scalextric sets make easy recommendations too. My girls and I certainly had fun with our set and it should prove to be a regular activity at our house over Christmas and beyond.