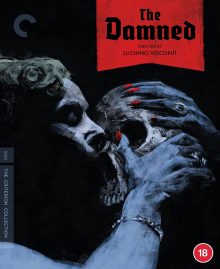 Most films that depict the Nazi’s are set, understandably, either at the height of the Second World War or during its disastrous last days and tragic aftermath. It is surprising then, considering the similar scope for drama and tragedy, that the story of the Nazi rise to power throughout the 1930s has not been told more often. One film that stands out in this regard is, of course, Luchino Visconti’s The Damned, the garish, opulent and subversive family drama that takes the concept of the Nazi’s ascension to dominance and transforms it into nothing less than an exploration of the total corruption of the soul.

Those looking for an accurate historical drama should look away now. While elements of The Damned are rooted in reality, from certain key events, to its sets and its costumes, Visconti wasn’t interested in historical re-enactment. Although the Essenbecks, the fictional family at the heart of the film, were based in part upon the Krupps, the real life steel magnates who helped the Nazi war effort, Visconti instead uses the Essenbecks as a window to reflect on how Fascism corrupts, distorts and ultimately destroys. 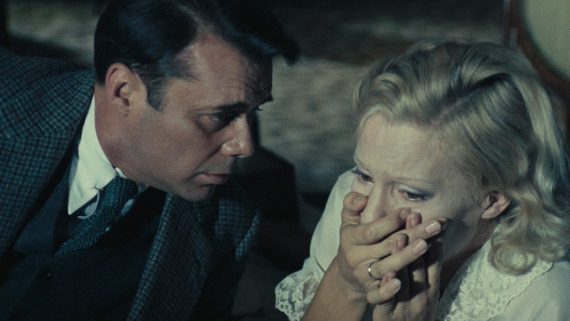 Visconti pulls no punches in the opening minutes of The Damned, launching his audience into the heart of his fictional family with little explanation of who is who. Yet the story soon becomes clear. Opening on the night of the Reichstag Fire in 1933, The Essenbecks, one of Germany’s most powerful industrialist  families, have gathered together to celebrate the birthday of Baron Joachim (Albrecht Schoenhals). When tragedy strikes, a power vacuum is created within the heart of the family business. Martin (Helmut Berger) the rightful heir, is too timid to take the reigns, leaving Friedrich (Dirk Bogarde), his girlfriend Sophie (Ingrid Thulin) and SA thug Konstantin (Reinhard Kolldehof) all vying for power and control – a power battle that we see spill out over the next two and a half hours with tragic and shocking consequences.

Shocking is the key word here. While some of The Damned’s preoccupations with family strife and discord certainly hark back to Visconti’s earlier work such as Rocco and his Brothers and The Leopard (another study of an aristocratic family in decay), the film was nevertheless unlike anything else Visconti had ever made up to that point. It is hard to think of a button he didn’t try to push with The Damned. Rape, violence, murder, suicide, incest and pedophilia all make their way into the film, resulting in an incredibly dark tale that at times feels more akin to Shakespearean tragedy and Greek Drama (no wonder the film was initially given an X rating). The figures of Iago, Lady Macbeth and Oedipus cast their shadows over certain characters and situations, all helping to heighten the sense of Visconti’s opulent theatrical vision. 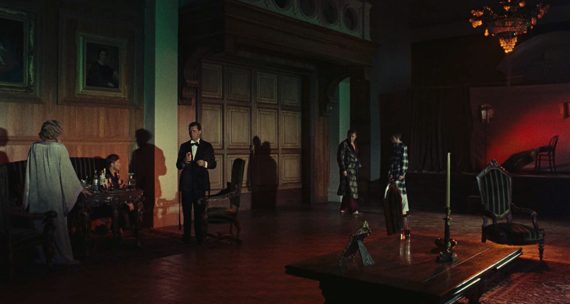 The Damned is certainly shot on a grand scale, laced with garish colours and sweeping camera moves that help to enforce the scope of Visconti’s story. Yet while it at times encompasses a broad view of the Nazi rise to power (The Night of the Long Knives being the brutal centrepiece) it remains, ultimately, a film more concerned with the intimate rather than the epic. The gradual encroachment of Nazi dominance isn’t captured through the transformation of Germany, but instead through the gradual moral decline of the main characters. 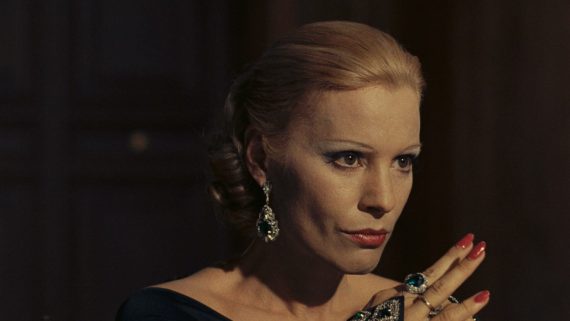 And here lies arguably The Damned’s most problematic element. In The Damned, Visconti seems to equate this moral decay with sexual decadence. As critic Stefano Albertini notes on the Blu Ray, pedophilia and incest are simply two roads on the journey towards the ultimate evil (the donning and acceptance of the Nazi Uniform). Yet it is bizarre, considering Visconti’s own sexuality, that he seems to include homosexuality among the forms of sexual perversion that ultimately leads to the dominance of Fascism and the Nazi state. It is hard to grapple with this element of the film and no doubt modern audiences coming to the The Damned for the first time may struggle with this long controversial aspect.

Despite the heaviness and incredibly brutal aspects of the material, the film’s cast handle everything with skill and nuance, ensuring that a degree of humanity always remains among the characters as they fall victim to Visconti’s broader themes. Dirk Bogarde gives a reliably effortless performance, taking yet another role that pushed his persona a million miles away from that of the teen matinee idol that haunted him throughout the 1950s, while Reinhard Kolldehoff is effectively thuggish and belligerent as a brutish SA officer. Yet the film really belongs to Ingrid Thulin and Helmut Berger. Thulin, most famous at this point for her work with Bergman, masterfully combines ambition and manipulation behind an ice white face that is as chilling as it is tragic, while Berger, the vast majority of the time, is simply allowed to steal the show. 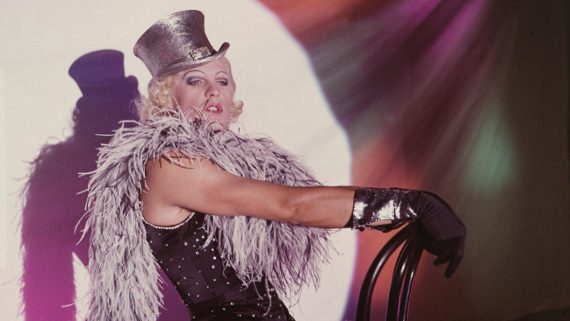 Perhaps this isn’t surprising, as he was in a relationship with Visconti. This meant that his role grew in statue as filming progressed (much to Bogarde’s, who was under the assumption that he was the leading man, frustration). From his iconic opening scene, where he performs as Marlene Dietrich from The Blue Angle, Berger proves to be the film’s incredibly bleak and dark heart.

The Damned is a hard film to recommend; it is one of those movies you’ll end up admiring more than loving, but that is understandable considering its subject matter. It certainly has its flaws, beyond the aforementioned deception of homosexuality. As an historical film, it neither works as an accurate document charting the Nazi rise to power (although, paradoxically, it requires the audience to have some historical knowledge for some scenes to make sense) and as a family drama, it feels too histrionic and outlandish to completely ring true. 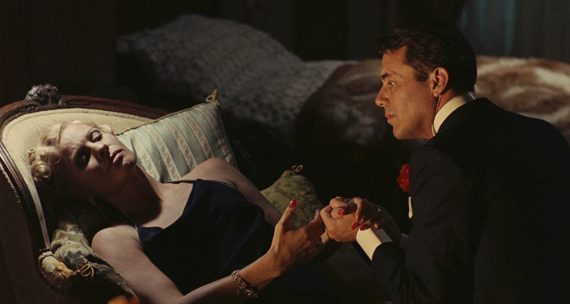 Yet neither of these elements were Visconti’s goal. The Damned is not a film concerned with subtle messages or nuanced critique. Instead, it is best viewed as a dark fable about the consolidation of Nazi power and the dangers of Fascism, set in a rich, pungent world of moral decay where characters are fuelled by lust and corruption. It is an historical epic infused with Shakespearean tragedy and while it paints its message with phenomenally broad stokes, cinema has rarely seen a more powerfully operatic denunciation of Nazi Germany and the men and woman who were complicit in its rise to power.

The Damned is being released on Blu Ray as part of the Criterion Collection. I have only ever seen a DVD of the film before, which had pretty abysmal picture quality. This new Blu Ray (struck from a 2K restoration) therefore came as a revelation. Detail and colours burst out of the screen while the generally dark and moody atmosphere of the film is wonderfully handled. For owners of the old DVD, this visual upgrade is worth the price of admission alone. The uncompressed monaural soundtrack likewise sounds clean and legible throughout.

Interview from 1970 with director Luchino Visconti: The most substantial extra on the disc is this black and white contemporary interview, taken from what seems to be an Italian cultural arts TV programme just after the The Damned had been released. Visconti answers a few questions from the host, but the bulk of conversation is between Visconti and the audience (some of whom provide some laughs, such as the man who can’t quite understand why Visconti hasn’t stuck 100% to historical accuracy). Visconti handles the questions (even the critical ones) with grace, offering some fascinating insights along the way.

Visconti On Set: This is a short and rather fawning look at the making of The Damned from the late sixties. The real gem here is the on-set footage, which, while brief, is still fascinating to watch.

New interview with scholar Stefano Albertini: Albertini offers a fairly brief 16 minute critical appraisal of The Damned, focusing mainly on its sexual politics and how that has influenced later films, such as The Night Porter. Albertini is a great host and offers lots of interesting and revealing takes on the film.

Archival Interviews: Criterion offer three interviews on the disc. The best by far is a loose 10 minute chat with Ingrid Thulin, shot at Cannes in 1969. She offers great anecdotes and insights about working with Visconti, Bergman and Resnais. She also provides a very amusing observation about the differences between European and American film sets. The Berger interview is also contemporary, yet is far more terse and awkward as he discusses his role in the film and offers his thoughts on contemporary cinema. The Charlotte Rampling interview is only three minutes long; she recalls her time working on the film with Visconti, fondly remembering his directing techniques.

The package is rounded out with a trailer and a short essay (which I didn’t receive for this review).