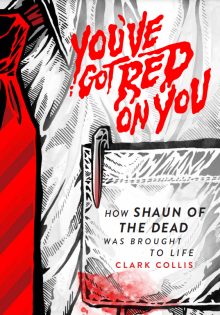 You’ve Got Red On You by Clark Collis is a slice of fried gold. An in-depth and thoroughly entertaining look at the phenomenon that is Shaun of the Dead. Edgar Wright’s sophomore film launched his burgeoning career and that of its stars, Simon Pegg and Nick Frost. It was a success that is unlikely to be seen again. The audience isn’t there anymore; zombie geekdom has gone meta, re-filtered too many times and through too much exposure.

No, films like Shaun are done. For one thing, if you are a geek of a certain age, a similar generation to those that made Shaun of the Dead, you’ll fondly recognise the 80s/90s Britain in which the story starts. Young Edgar Wright couldn’t get hold of Evil Dead or Dawn of the Dead and had to make-do reading about them, so much so, he knew every detail by the time he did see them. A lot of us recognise ourselves in that, but would teens now chase such legends? As Clark says towards the end of his book, “Edgar Wright’s experience of having to learn about pop culture through magazines or staying awake until the early hours of the morning to watch a film on TV would seem prehistoric to anyone growing up the 21st century”. I certainly don’t have to sneak downstairs at midnight to catch Terminator on BBC2 anymore, which is kind of a shame.

You may have read a few classic making-of books, especially J.W. Rinzler’s Lucasfilm stuff, or Cary Elwes’ As You Wish, about The Princess Bride. Clark’s book belongs on that shelf, which is especially brilliant to realise because Shaun isn’t an 80s Hollywood behemoth. It’s a scrappy British film from 2004 and I can’t think of another relatively recent production that deserves such scrutiny. And reading Clark’s account, getting Shaun made was a result of talent, luck and sheer bloody-minded tenacity.

I hadn’t appreciated that Shaun was a FilmFour production, that is until the company collapsed, leaving the crew adrift, trying to score £4 million from another studio while Pegg was falling off the wagon. Then an apoplectic Wright’s hero Danny Boyle does his own “zombie” movie when Shaun was supposed to be filling a sizable gap in undead productions. Luckily, they turn out not to be zombies at all in Boyle’s 28 Days Later; they’re just poorly.

Before you get to the meat and potatoes of Clark’s account of making a zombie apocalypse in Crouch End, you get to play six degrees of separation, with the gang drifting in and out of an A and B list of British comedy while they circle one another on their way to Shaun. Wright even directed the French and Saunders Christmas special and got Jeremy Beadle in his first film, A Fistful of Fingers. Meanwhile, I knew Pegg and Frost were close, but not sharing-a-bed-platonically-close. Much of the book’s early appeal is the anecdotes of genuine friendships carrying them through to two series of Spaced and the struggles beyond to get Shaun made instead of a third series of the hugely popular C4 sitcom.

When the book moves onto the production of Shaun itself, it’s admirably stuffed with “zombage” anecdotes, which is just fabulous, especially Mark Donovan going to the shop in full make-up. He was the zombie in the garden getting vinyl lobbed at him (and getting the rights to lob said vinyl was easier said than done).

Despite an obvious love for the film, Clark avoids being sycophantic. Throughout, the book is peppered with quotes from media reports and reviews of the day to paint a thorough picture. On set, Wright butts heads with American cinematographer David Dunlap and the reader is left to decide who was right. Overall, Shaun was a one-off, dragged into shambling life by an ambitious crew who think the world of one another. It helped some that they were good enough to pull off a romantic comedy to better Richard Curtis with a cast to match. Bill Nighy has nothing but good memories of being covered in gore, stuck in the back of a Jag with Nick Frost telling him filthy jokes.

The full-blooded involvement of the cast and crew via sporadic interview quotes, plus tons of material like poster drafts, storyboards, etc, across 430 pages is a real winner. My only complaint is suitably niche and pedantic; as a proud 2000 AD fan, the omission of the comic’s brilliant spin-off adaptation was glaring. (Prog 1384, “There’s Something About Mary”, written by Pegg and Wright, and drawn by Frazer Irving, if you’re wondering). Told you it was pedantic.