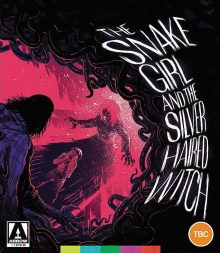 The snake girl myth is a classic one in Japanese history, though it originally came from a combination of myths brought over from China and India. Due to its familiarity, it had appeared in films since the early days of Japanese cinema.

The manga author Kazuo Umezu also used the snake girl myth as inspiration for his book, ‘Hebimusune to Hakuhatsuki’. This must have caught the attention of director Noriaki Yuasa as he chose to adapt it into a film instead of risking burnout by making a second Gamera film in 1968. He’d already made four in quick succession by that point, as either director or special effects director, so told his eager producers at Daiei that instead he’d like to take on something different before jumping on another bunch of work-intensive blockbusters. Having benefited from the success of his previous films, the producers allowed this and work began on The Snake Girl and the Silver-Haired Witch.

The film wasn’t a huge success but did average business in Japan and has since become a minor cult classic. In their on-going trawl through Daiei’s genre movie back catalogue, Arrow Video are turning to The Snake Girl and the Silver-Haired Witch for their latest release. With my penchant for weird and wonderful old Japanese movies, I couldn’t resist giving it a watch. My thoughts follow.

Snake Girl (as I’ll call it for the rest of this review) sees a young girl named Sayuri (Yachie Matsui) leave the orphanage she’d been living in, after her birth parents are found and ask to take her back. Her father (Yoshirô Kitahara) seems very happy to see her and brings her back to the family home. She’s warned that her mother (Yûko Hamada) has been acting strangely after an accident though. Nevertheless, her mother treats her kindly and all seems well.

However, after seeing some strange visions of a snake girl at night, Sayuri seems less welcome in the house. Things get even worse for her when, after her father leaves the country to study a venomous snake, she discovers a girl named Tamami (Mayumi Takahashi) has been living in the attic. Sayuri’s mother tells her that Tamami is her sister, who can’t leave the house for some untold reason. Sayuri is asked not to tell her father about this revelation and whilst he’s away she is to share a room with her sister.

Tamami is not as friendly as her mother though and torments her newfound sister. In Sayuri’s dreams she also sees Tamami as a snake girl and other real world clues suggest this to be true. Nobody believes Sayuri when she tells them this though, other than her older ‘brother’ from the orphanage Tatsuya (Sei Hiraizumi). As Tamami’s actions grow ever more cruel and frightening, Sayuri and Tatsuya must try to stop her before it’s too late.

From the publicity blurb for Snake Girl, I was hoping for a baffling, no-holds-barred slice of Japanese madness similar to Nobuhiko Ôbayashi’s House (a.k.a. Hausu). I didn’t quite get this, which was a little disappointing, but that’s not to say I didn’t enjoy the film or that it was in any way conventional.

What’s most unusual about Snake Girl is that its audience isn’t clear. In having a child be the main protagonist whose viewpoint the audience almost exclusively follows, it seems like a kids film on the surface. However, when you’ve got an antagonist that rips our heroine’s pet toad in half in front of her eyes, dissolves snakes in acid and threatens to do the same to her sister, you’ve got the recipe for a decidedly adult horror film. It’s a peculiar blend that won’t appeal to everyone but it actually landed well with me, as I’m a sucker for family adventure films and also enjoy over the top classic horror.

On top of this blend of scares and family entertainment, the film is cashing in on the special effects boom of the era (another reason why special effects expert Yuasa was allowed to make it). There are plenty of cool practical effects in Snake Girl, such as the titular character’s widened mouth, the witch’s detaching arms and the trippy backgrounds and foregrounds to the many bizarre dream sequences. A scene where a room becomes filled with spiders is less successful though, with none of the creatures looking even remotely realistic. Granted, none of the effects are wholly believable in the film, but the spiders are too immobile to offer any sort of threat.

Snake Girl also takes influence from gothic horror movies like those being made in the UK by Hammer studios or The Cat People in the US. This is largely reflected in the haunted house setting and beautiful high contrast black and white photography that makes great use of shadows and regular lightning effects.

These various influences all come together nicely to create something altogether unique.

Also notable is the fact the cast of characters is largely made up of girls and women. The original manga author, Umezu, who had his first book published whilst still in high school, was famous for his work in the horror genre and for having mostly female protagonists, which was rare in horror manga at the time. The same goes for horror films in the country, which helps make this film special. There are few male characters at all in this, in fact, other than Sayuri’s ‘brother’ and her dad, who disappears from the film after a few minutes.

Yachie Matsui, who plays Sayuri, was only 10 years old when she made Snake Girl. She’s very wide-eyed and far too forgiving to the antagonists throughout the film but does a remarkable job for her age. She never did lots of acting afterwards though, becoming a champion bowler as an adult! Her overly optimistic performance here likely comes from Yuasa and the style he’d established with the Gamera films. The Sayuri character was reportedly much more freaked out by what was happening in the manga.

Quite a few of the plot elements don’t add up in the film, such as how, why and for how long Tamami’s existence in the loft was being kept from her dad. The seeming age difference between the girls also conflicts with a twist that crops up later, as do the skills of the snake girl and silver-haired witch. David Kalat makes a possible excuse for most of these holes, suggesting that, because many of the issues are caused by a scene that doesn’t feature our protagonist, it may be from her imagination, but I think that’s hard to swallow. I prefer the conclusion that the filmmakers weren’t interested in narrative logic and instead placed atmosphere above all. I’m OK with that, to be honest.

All-in-all then, though The Snake Girl and the Silver-Haired Witch didn’t prove to be quite as wild and wacky as something like House as I’d hoped, it’s still light-years away from Western family adventure/horror movies and highly entertaining. With a suitably atmospheric style and old-fashioned techniques it’s a fun hybrid of kids fantasy and adult horror that those with a taste for the unusual will be sure to appreciate.

The Snake Girl and the Silver-Haired Witch is out on 20th September on Blu-ray, released by Arrow Video. There are some very faint scratches in places but overall the picture quality is impressive and rich in detail. The images used throughout this review are screengrabs from the disc, to give examples. The audio is solid too.

A David Kalat commentary is always a welcome addition to any disc and his track here doesn’t disappoint. He dissects the film in great detail, offering some fascinating insight with infectious zeal. He’s honest about many of the nonsensical elements but uses these to craft a far-fetched suggested explanation for them. I’m not sure I bought it, but I enjoyed hearing his theory nonetheless.

The interview with Zack Davisson is very good too. He discusses the origins of the snake girl myth as well as how that was adapted to manga by Kazuo Umezu before becoming the film. It’s a highly informative and enjoyable piece.

It’s a strong release of an enjoyable and unique film that fans of unusual Japanese cinema should definitely purchase.