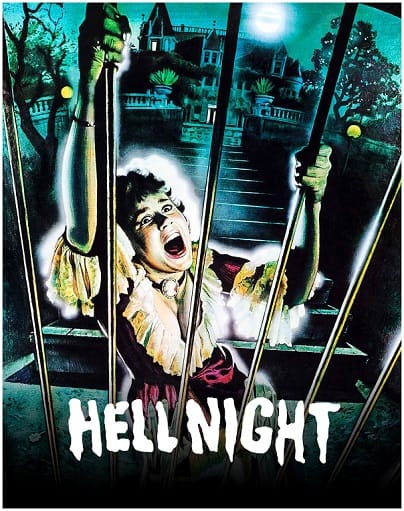 Another 80s horror gem is dusted off and given the Blu Ray treatment thanks to 101 films, this time Tom DeSimone’s excellent Hell Night. Four college pledges (Blair, Van Patten, Barton, Goodwin) must complete a hazing ritual by spending the night in the notorious Garth Manor. Known to be the site of a bloody massacre years earlier involving the family who lived there, rumours are members still live and stalk the house. The four soon find out if the rumours are true when the pranks their college peers attempt to pull (as part of the hazing ritual) are thwarted by real death and destruction, and the bodies begin to pile up.

Originally released during the heyday of slasher movies, Hell Night is a cut above a lot of the flicks that followed the likes of Halloween and Friday the 13th thanks in part to a great location, an excellent cast, some impressive death scenes, and assured direction from Tom DeSimone. Spending the night in a supposedly haunted house and then being picked off one by one is horror movie 101 but thanks to a neat set up (former inhabitants living underneath the house in a series of caves and thirsty for blood!) and a great balance between fun, scares and gore means Hell Night is a scream. Excellent photography from the great Mac Ahlberg (love the opening tacking shot taking in all the debauchery of a college party!) gives the flick a welcome gothic feel (as does the fact the main characters are dressed up in Halloween garb!) and DeSimone’s confident balance between tension and gore means Hell Night is a fun ride: certainly when the inhabitants make themselves known and start chasing and killing the youngsters.

There’s are some nifty gore set-pieces including a still impressive decapitation, a WTF neck-break (!) and one of the best death scenes of a villain seen in a horror movie! While the gore and grue is impressive it doesn’t dominate proceedings as writer Randy Feldman (who went on the pen action blockbusters such and Tango & Cash and Metro) and DeSimone also wrangle a fair bit of tension out of proceedings and mercifully make the characters likable. Blair, still riding high on the success of The Exorcist, leads a bunch of refreshingly pleasant youngsters who we come to know, and hope can eventually outrun their assailant. Vincent Van Patten (The Valdez Horses, Rock ‘n Roll High School) all but steals the picture as surfer dude Seth who does everything he can to try and save everyone, his energy helping propel the action.

It may be a little slow paced for modern tastes and if you’re not into the slasher gerne, well you can always go and watch something more “worthy” if that’s your bag, but for horror fans Hell Night is a gem worth rewatching in its shiny new Blu Ray form or discovering for the first time if you’ve not yet checked it out before. 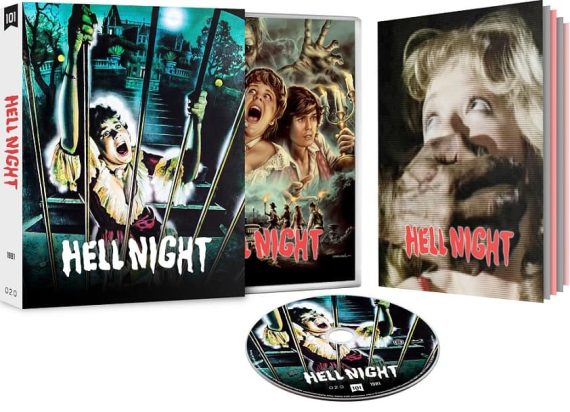