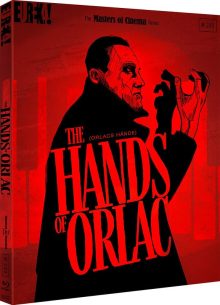 Robert Wiene is a director largely only known for one film, The Cabinet of Dr. Caligari. His work on that even tends to be downplayed, with more credit going towards the writers, cast and production designer, or even Fritz Lang, who originally planned to make the film. However, Dr. Caligari was only one of Wiene’s 52 films behind the camera over a relatively brief but productive career as a director.

Probably his second most well-known film, The Hands of Orlac, saw Weine reunite with Caligari’s Conrad Veidt in 1924 for another horror classic. It isn’t considered one of the greats of the silent era, as Caligari is, but The Hands of Orlac has had its own notable impact on cinema over the years. 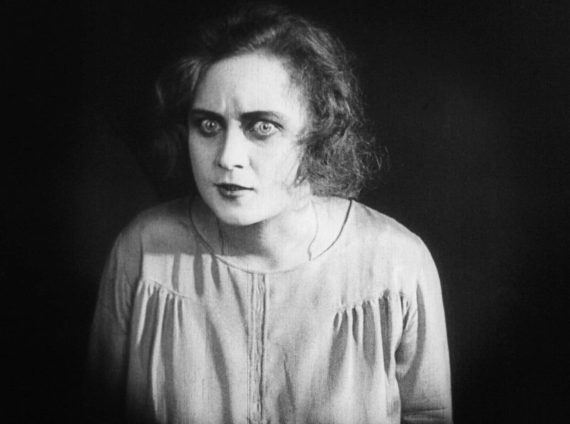 The film was based on a popular French serial (and later a novel) named ‘Les Mains d’Orlac’ (1920), written by Maurice Renard, who is well known in his native country but less so elsewhere, and has been remade into films several times over the years. Not only are there four ‘official’ film versions (including Wiene’s The Hands of Orlac), but the central concept has been borrowed and adapted in countless films over the decades.

With the The Hands of Orlac being the first adaptation and the novel not making a big impact outside of France, it could well be suggested that Wiene’s film is what inspired this slew of related horror movies. Some critics, including those contributing to Eureka’s forthcoming Blu-ray release of The Hands of Orlac, suggest the film could be cited as the first cinematic example of ‘body horror’, in fact. 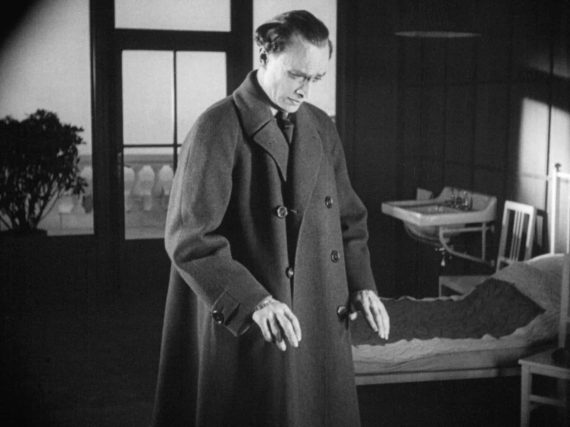 The Hands of Orlac sees Veidt play Paul Orlac, a brilliant pianist who loses both of his hands in a train accident. His wife Yvonne (Alexandra Sorina) pleads with Dr. Serral (Hans Homma) to do something, as “his hands are his life”. So, the doctor tries an experimental new surgery on Orlac, grafting a new pair of hands onto his arms.

As Orlac recovers, he feels something isn’t quite right with his hands though. On top of not being able to play the piano like he used to, he’s having strange nightmares, visions of a creepy-looking man (Fritz Kortner) and dark, murderous urges. Orlac soon discovers his new hands once belonged to a killer named Vasseur, and believes this is causing him to have these strange problems.

Meanwhile, the Orlacs are running out of money, due to Paul being out of work, and Yvonne begs her husband’s rich father (Fritz Strassny), who hates his son (presumably for choosing an ‘artistic’ life over a more ‘honourable’ one), to lend them some money. 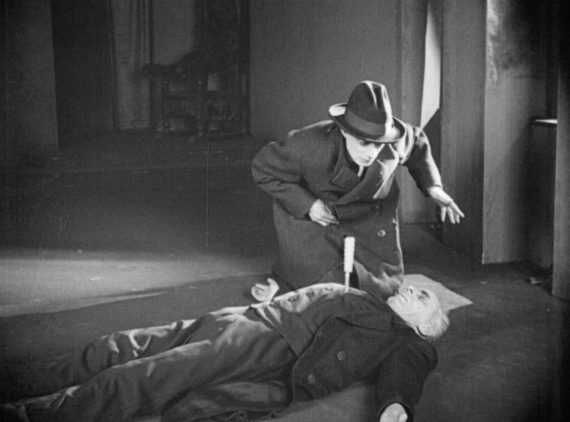 When his father later turns up dead, seemingly at the hands of the executed Vasseur, Orlac wonders if he might have done the deed himself and, if not, who else could have.

The idea of transplanted limbs being possessed by the spirit of their previous owner is preposterous of course, but it makes for a simple but effective concept for a horror movie, as the numerous films inspired by this can attest to.

Wiene takes an interesting approach to the material. Stripping back the originally long and convoluted serial/novel to its bare essentials (most of the film is based on only the first and last couple of chapters), the director turns it into a stark, minimalist film.

On top of keeping the story simple, the sets are stripped bare too. After Caligari was praised for creating the idea of German Expressionist cinema with its abstract painted sets, Wiene goes the other way here. The production design follows a much more realistic, yet sparse style. It’s still effective in accentuating the mood of the film though, with large, empty spaces creating a suitably oppressive atmosphere and highlighting Orlac’s solitude and despair. This is further aided by some wonderfully moody lighting. 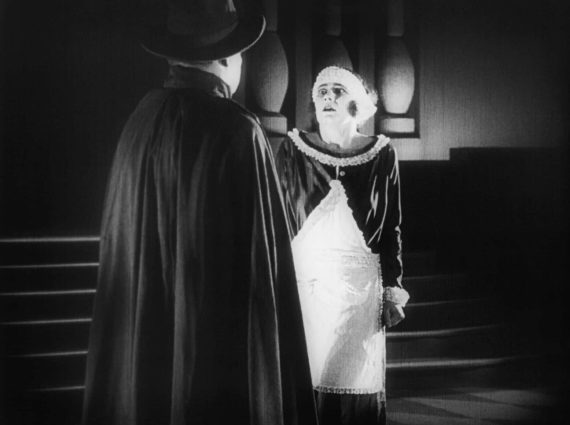 The performances are still quite expressionistic though. The story is pared down to allow for the cast, particularly Veidt, to interpret their characters’ emotions physically in drawn-out, dance-like sequences. This style might prove quite polarising with audiences. You either tap into this unusual approach, which is unique to silent expressionist cinema, or you find it slow-moving and over-the-top.

Personally, I quite enjoyed the performance style, particularly Veidt’s magnetic turn as Orlac. He might seem gleefully hammy by today’s standards and his slow movements keep the pace pretty glacial, but if you can accept the approach, with all its prolonged, accentuated gestures, it’s intoxicating to watch him bring his character’s inner turmoil to the surface in dramatic fashion.

Sorina is less impressive, as his long-suffering wife, and can feel more histrionic, but the pair do have some wonderfully passionate scenes together. There’s a strong sexual undercurrent to the film, in fact, as it’s suggested that Yvonne is more concerned with her husband not being able to make “her body tremble under my hands” as Orlac writes in a letter to her before the train crash. 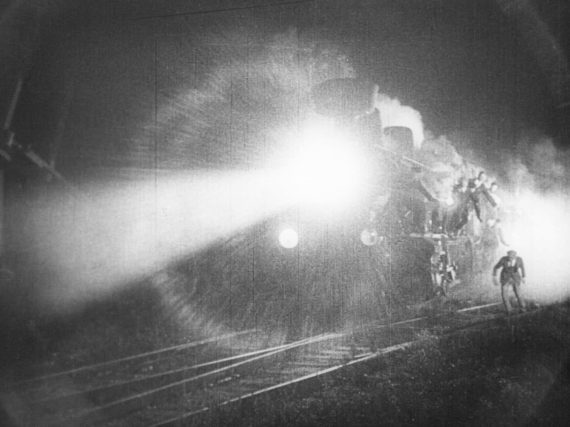 Wiene keeps his shots very static, which gives the film somewhat of a theatrical look and seems dated for a film in the late silent era, as contemporaries such as Murnau were making great use of camera movement by this time. However, lighting and composition are well-realised, making for a suitably atmospheric look. The opening train crash is thrillingly staged too, making great use of visible light sources and clever editing techniques.

Overall, The Hands of Orlac is a starkly stripped-back classic horror film that may have some dated elements that won’t win over everyone, but still has the power to get under your skin and keep you drawn into its nightmarish world.

The Hands of Orlac is out on 14th June on Blu-Ray in the UK, released by Eureka as part of their Masters of Cinema series. As you might expect from a film of its age, there is damage on the print, but this is fairly light. As is also common with films from the era, the whites can be a bit burnt out too, losing a little detail, but, for a film that’s almost 100 years old, it looks remarkably good. As for audio, the avant-garde score comes through nicely. This challenging soundtrack took a little while to get used to, but I warmed to it by the end.

In the commentary, I found Stephen Jones was a bit too harsh on the film, with regular negative comments about it throughout. It’s an enjoyable track though, that sees him and Kim Newman discuss the original serial as well as the various film versions of the story and how it influenced horror cinema in general.

David Cairns and Fiona Watson’s essay is excellent, giving a brief but rich potted history of the production and some analysis.

The scene comparisons help appreciate the unusual issues of restoring silent films, due to the variations between prints.

Speaking of which, you also get an alternative version of the film itself. It’s in SD and isn’t as nicely cleaned up as the Film Archiv Austria version, but is a welcome inclusion. I must admit, I didn’t watch it from start to finish, but the comparison piece helped give me an idea of what I was missing out on. The changes looked pretty subtle, so I won’t be rushing to watch the alternative cut, but hardcore fans of the film will be pleased to have it included.

The booklet is an important addition to the set, as usual. It contains an essay calling for a reappraisal of Wiene’s work, beyond Dr. Caligari, and another on the writing and influence of Maurice Renard.

Overall, a decent package for a fine film. Recommended.