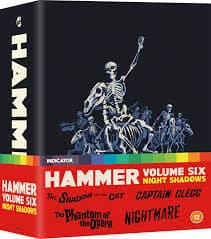 Hammer Volume Six: Night Shadows digs further into the recesses of 1960’s horror with a selection of four films destined for Universal Pictures. The first offering is The Shadow of the Cat which gives a nod to Edgar Allan Poe, as his classic poem “The Raven” opens the proceedings. This macabre tale stars André Morell (Cash on Demand) and Barbara Shelley (The Camp on Blood Island). The riotous Captain Clegg gallops out next, starring Peter Cushing (The Gorgon, Corruption) and Oliver Reed (The Scarlet Blade)in an eighteenth-century horror adventure. The third film in this selection is The Phantom of the Opera, Gaston Leroux’s Gothic classic, starring Herbert Lom (Mysterious Island). The final film being Nightmare, featuring Moira Redmond (Jigsaw) and Jennie Linden (A Severed Head)in a psychological thriller. 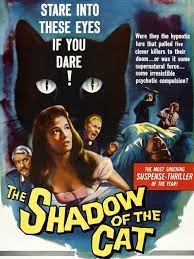 Filthy-rich Ella Venable (Catherine Lacey is bumped off in her mansion by her butler (Andrew Crawford). The butler and Ella’s husband (André Morell)bury her on the grounds. Even the maid (Freda Jackson)joins in, poor old Ella seems to have upset everyone.

Ella’s beloved moggie Tabitha spots what’s going on, seeming to understand the dreadful crime. The wicked trio realise that the pussy is the only witness and decides to dispatch the cat, for good measure.

Before killing Ella her husband, Walter, makes her alter the will to his advantage. To be sure that there are no problems he must find and destroy the original. Walter further covers his tracks by claiming Ella has disappeared. Unfortunately for him reporter Michael Latimer (Conrad Phillips) and Inspector Rowles (Alan Wheatley) are on hand to investigate the disappearance. Unpleasant Walter is desperate to make sure all potential problems are removed. He goes as far as coming up with a plan to remove Ella’s niece Elizabeth (Barbara Shelley), from the scene. However, his plan may fail as Michael and Elizabeth soon team up together.

While in the attic searching for the will Walter has a nasty accident and ends up in bed. Now incapacitated and needing help he enlists more undesirables from the family. He involves nasty nephew Jacob (William Lucas)his wife Louise (Vanda Godsell)and his father Edgar (Richard Warner). He offers this second trio a share of the loot if they find the will and kill the pussy. Unfortunately for them, the cat knows what they are planning and no doubt will wreak terrible revenge. 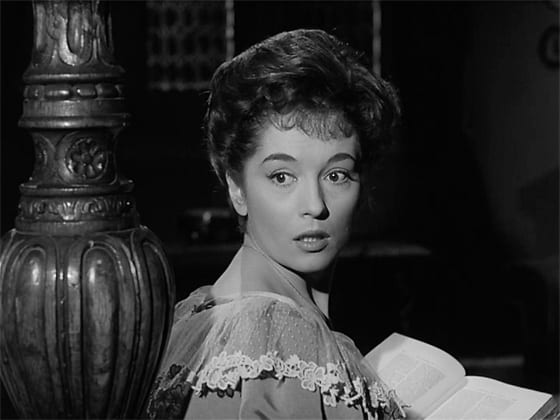 This one was more fun than I thought it would be, with adept acting and a remarkably enjoyable psycho cat. It’s entertaining, studded with stars accompanied by a fine music score, making it recommendable.

THE SHADOW OF THE CAT

· In the Shadow of Shelley (2020, 25 mins): an in-depth interview with the legendary horror actor Barbara Shelley

· Cat People (2021, 5 mins): assistant costume designer Yvonne Blake and Peter Allchorne, of the property department, share their memories of working on the film

· Kim Newman Introduces ‘The Shadow of the Cat’ (2021, 11 mins): an appreciation by the critic and author 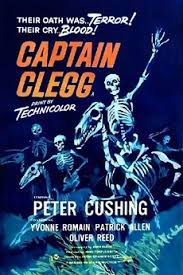 The Royal Navy hang Captain Clegg and he is buried at Dymchurch on Romney Marsh in 1792.A location frequented by strange apparitions the “Marsh Phantoms”.

Dymchurch has become a haven for smugglers. Captain Collier (Patrick Allen) and his men are sent to investigate. Collier brings with him a slave that he saved after his tongue was cut out. In their search for contraband, Collier’s crew smash to pieces the local inn run by Rash (Martin Benson) and Imogène (Yvonne Romain). They discover a cellar connected to the smuggler’s hideout. Dr. Blyss (Peter Cushing), is the head of the smugglers. Collier’s slave immediately attacks Dr. Blyss before being with-strained.

During the night the smugglers bring in a shipment from France to store in a windmill. Harry (Oliver Reed), Imogène’s fiancé, is shot by Collier. Back at the pub Rash kills one of the sailors, to ensure no one finds out about the smuggling operation. During the disruption, the slave escapes opening Clegg’s grave. When the slave attacks Blyss again, Collier starts to wonder who Blyss is. What will become of Collier and who are the smugglers? 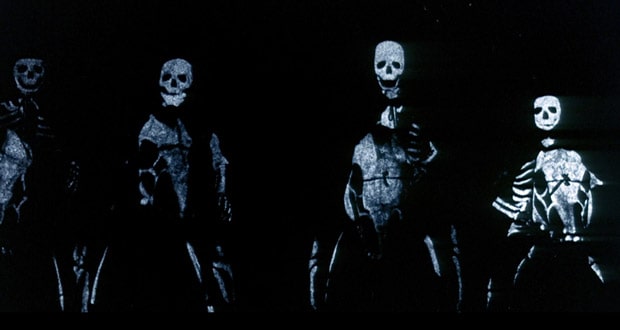 Well, you can’t go wrong with this cast with fine acting from the cream of the crop actors Oliver Reed and Peter Cushing. There’s a great adventure to be had here with a creepy twist, watch out for the scarecrow and marsh phantoms that are afoot.

· Two presentations of the film: Captain Clegg, with the original UK title sequence, and Night Creatures, with the alternative US titles

· Kim Newman Introduces ‘Captain Clegg’ (2021, 14 mins): an appreciation by the critic and author 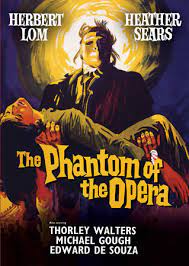 Screenplay: John Elder (Based on The Phantom of the Opera by Gaston Leroux)

In Victorian England, at the London Opera House, the season starts with a new opera by Lord D’Arcy (Michael Gough). Lord D’Arcy is furious when the opera manager Lattimer (Thorley Walters) lets him know that his opera is not packed out.

Tension fills the air, everyone including the star of the show, Maria feels unsettled. Even the producer Harry Hunter (Edward de Souza)can’t calm the situation. The atmosphere is not helped by the haunted viewing box which remains empty. When a stage-hand swing from the rafters the whole opera house is thrown into disarray.

The opera is canceled and Marie refuses to go through with the opera. Harry must find a new cast, he beings auditions. Harry picks Christine Charles (Heather Sears), Lord Ambrose takes a liking to Christine and invites her to dinner. She is warned by a disembodied voice to beware of Lord Ambrose. The wayward Lord tries to take advantage of Christine, but Harry comes to the rescue. Christine lets Harry know about the voice she heard.

They head back to the opera house to see if they can find the source of the mystery voice. The voice is heard again, this time telling Harry to leave Christine at the opera house. Meanwhile, the rat-catcher (Patrick Troughton)is killed by the phantom’s henchman (Ian Wilson). While Harry is trying to find the killer a masked figure approaches Christine. She is horrified by the Phantom’s one-eyed mask. The phantom disappears into the shadows when Harry comes to the rescue, but the phantom has fled. 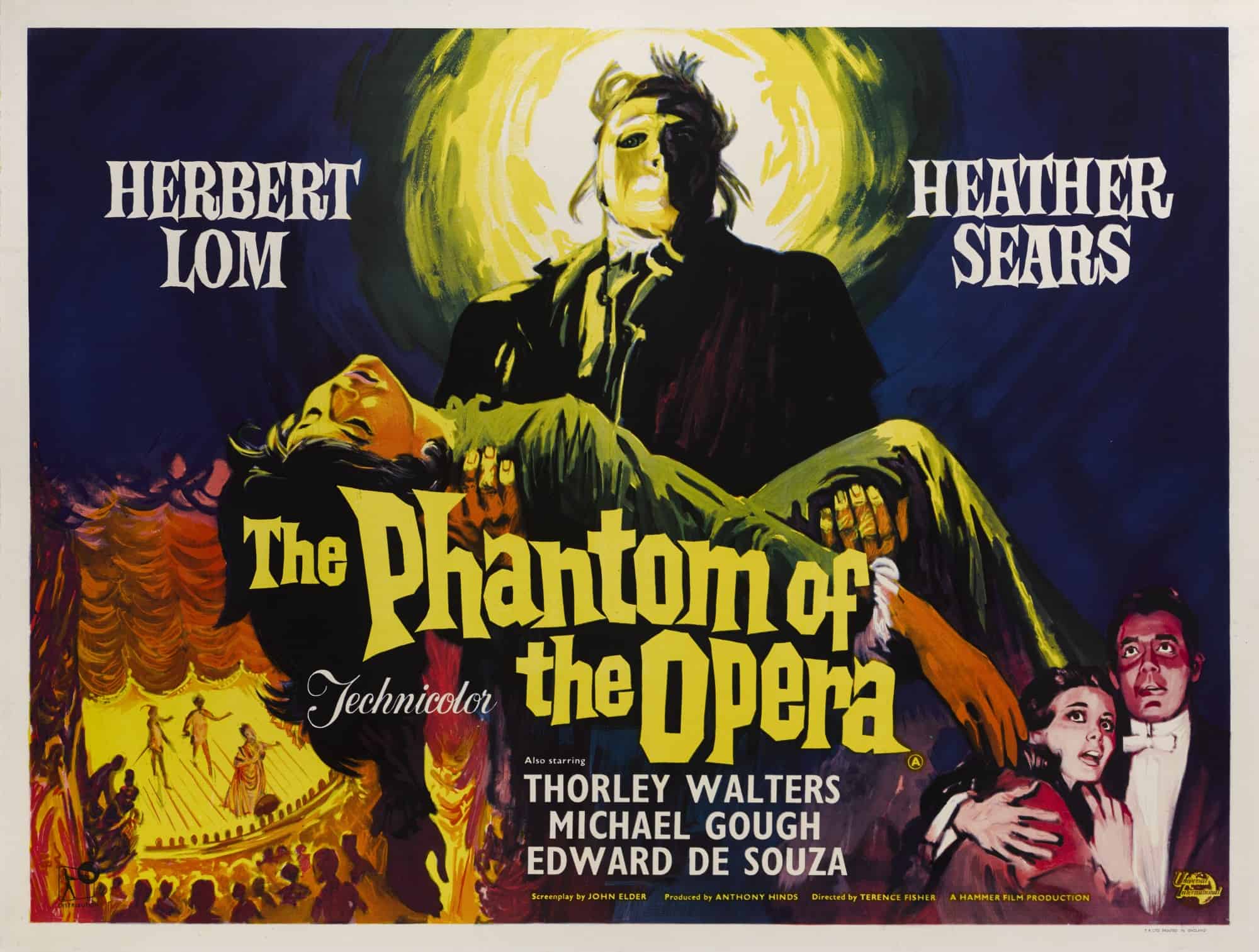 With fantastic imagery, this is a dramatic telling of the classic tale by Gaston Leroux. Grand performances, stunning design, and costumes make Phantom of the Opera an atmospheric viewing experience.

THE PHANTOM OF THE OPERA

· Kim Newman Introduces ‘The Phantom of the Opera’ (2021, 13 mins): an appreciation by the critic and author

· The Men Who Made Hammer: Anthony Hinds (2020, 28 mins): Richard Klemensen, editor and publisher of Little Shoppe of Horrors journal, revisits the career of one of Hammer’s most renowned screenwriters and producers

· Making of ‘The Phantom of the Opera’ (2014, 31 mins): documentary presented by actor Edward de Souza, including interviews with film historian Richard Golen, sound recordist Alan Lavender, and de Souza himself

· Limited edition exclusive 40-page booklet with a new essay by Adam Scovell, Terence Fisher on The Phantom of the Opera, extracts from original press materials, an overview of contemporary critical responses, and film credits. 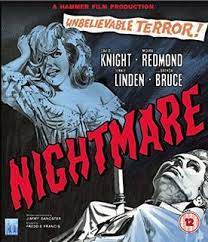 Nightmare commences as Janet witnesses her father’s murder. To make things worse her mother is incarcerated in a mental asylum for the crime. Six years later at finishing school Janet still suffers from nightmares. She returns home to be looked after by the family nurse.

Still plagued by nightmares, Janet is haunted by a woman who persuades her to go into her parents’ room. When she goes in the same woman is lying on the bed, however now she has been stabbed. Henry Baxter, Janet’s guardian arrives at the house to make sure all is well with Janet. However, the situation he finds is not a good one. Janet has been sedated by her doctor. The doctor suggests that Janet is sectioned, but Henry rejects the idea, with catastrophic consequences.

The mystery is building and the scene is set for a cluster of twists to keep you entertained in this horror thriller. 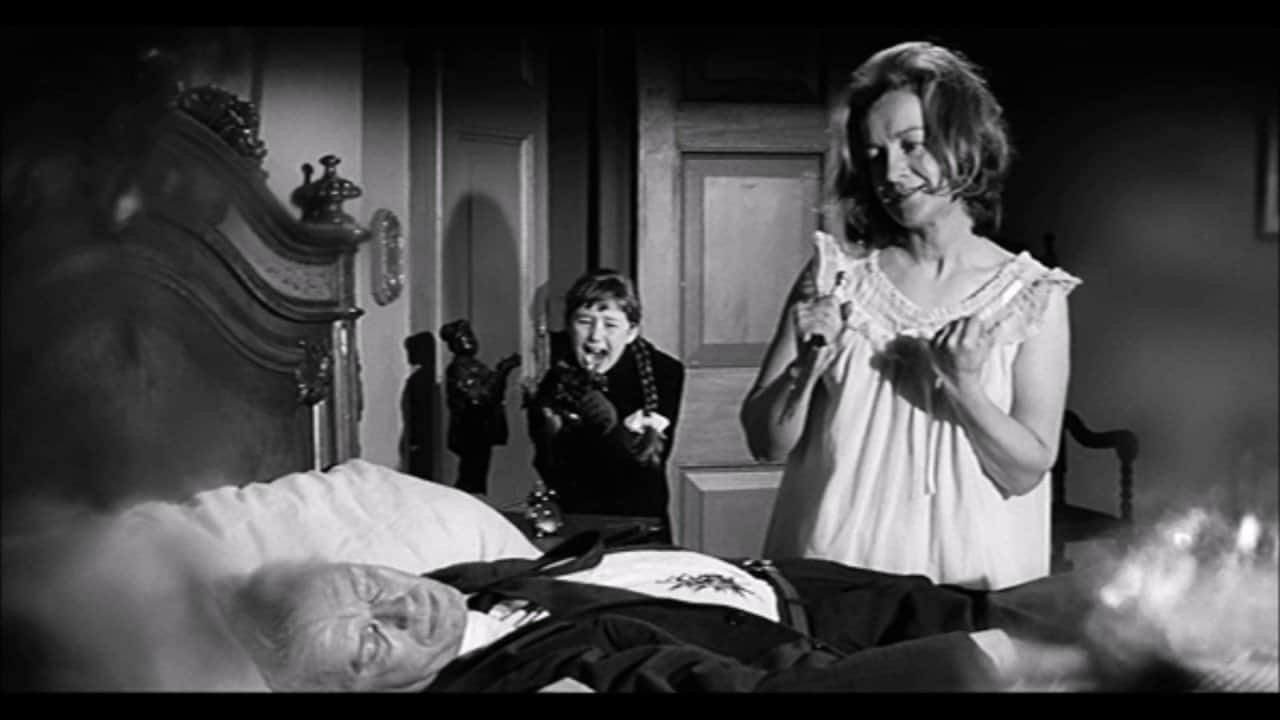 Gruesome scenes laced with madness make a nicely crafted puzzle. This world devoid of humor is strongly supported by Jimmy Sangster’s screenplay, although at times it tugs on the boundaries of logic. While the director manages to create a looming atmosphere of terror within the Gothic shadows. Amidst candlelight, dread pervades this bleak tale to make a highly recommended viewing experience.

· The BEHP Interview with Freddie Francis (1994, 83 mins): career-spanning audio interview, made as part of the British Entertainment History Project, featuring Francis in conversation with Alan Lawson and Syd Wilson

· Jennie Linden: Memories (2016, 15 mins): an interview with the Nightmare and Women in Love actor

· Kim Newman Introduces ‘Nightmare’ (2021, 8 mins): an appreciation by the critic and author

· Something Lurking in the Chords (2021, 30 mins): appreciation of Don Banks’ score by David Huckvale, author of Hammer Film Scores and the Musical Avant-Garde

Hammer Volume Six: Night Shadows is out 28 June 2021 as a limited edition Blu-ray Box Set, released by Indicator. I watched the Blu-rays which boast excellent picture and sound quality. The completed packaging of the box set, booklets, and the poster was not part of the review, so I am unable to comment on their quality.

This collection contains a plethora of both new and archival extra features including documentaries. Audio commentaries, extensive booklets plus crew and actor’s interviews support this fine box set.

Included is an exclusive double-sided poster only available with direct orders from this website (poster features the original UK quad designs for The Phantom of the Opera and Nightmare). While stocks last.

The set is also a limited edition box set of 6,000 numbered units making this an exclusive hefty tome of goodies to wade through.