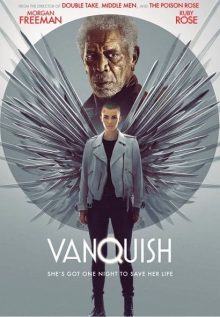 Ruby Rose plays Victoria, a former drug courier now trying to go straight and raise her young daughter. However, life ain’t so simple not least when former cop and confidant Damon (Freeman) comes a calling, holds Victoria’s daughter hostage, and demands Victoria use her special skills to collect money owed from five various gangsters across the city. Needing to complete the task in one night, Victoria has no choice but to take up arms and do Damon’s bidding which means taking on corrupt cops, German gangsters out for revenge, and various other shady crooks.

Oof, what should have been a straightforward pulpy action flick is anything but as Vanquish is laboured with shoddy artistic overload, sluggish pacing, and barely any action to speak of. Mired in confusing, ugly and faux artistic editing, Vanquish is headache inducing rather than pulse pounding. This leads to frustration rather than enjoyment as most scenes are bizarrely edited with constant dissolves robbing proceedings of any tension or momentum. The use of dissolves isn’t even used to convey the passage of time but irritatingly used just to cut between two characters talking within a scene. It is an odd choice and coupled with all the various jump cuts, garish colour filters and a reluctance to let any scene play out in a linear fashion robs Vanquish of the thrills and tension it should be delivering.

It’s perhaps an attempt at some avant-garde noir stylings but unfortunately it doesn’t work and it’s a shame as director and co-writer George Gallo has some good pedigree (having written the classic Midnight Run and directed the cool Christmas caper Trapped in Paradise with Nic Cage). Rose and Freeman try their best and Patrick Muldoon (Starship Troopers) has a fun cameo but with almost a complete lack of action (save for a couple of chases that, again, are rendered dull by dubious editing choices!), Vanquish unfortunately is just a nauseating confusing mess. Shame as this could have been a fun B-movie actioner.