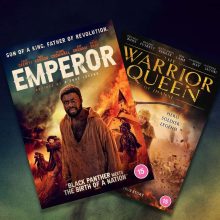 The historical epic Emperor is out now on digital platforms and DVD in the UK and, to celebrate, Kaleidoscope Entertainment have offered us a copy of the film on DVD in a bundle with The Warrior Queen of Jhansi to give away to one lucky reader.

Details on how to enter the competition are at the bottom of this page, but in the meantime, below is some information about Emperor:

From the producer of Django Unchained comes Emperor, an inspirational and timely portrait of courage and resilience set during a turbulent time in American history.

This epic story is inspired by the legend of 19th-century freedom fighter, Shields “Emperor” Green (Dayo Okeniyi, The Hunger Games, Shades of Blue), a descendant of African kings turned outlaw slave in the pre-Civil War South.

A man fighting to free his family and bring an end to tyranny, Emperor fights his way north, joining forces with abolitionist John Brown for a daring raid on Harper’s Ferry, helping to alter the course of American history in the process.

Once you’ve shared/tweeted the competition, you need to email us (subject – ‘Emperor Competition’) with your name and postal address to: info@blueprintreview.co.uk

1 winner will be picked at random when the competition has closed. The competition is only open to residents of the UK – one entry per person. The competition ends on 23rd April 2020 at 12pm. The winners will be contacted by email soon after that date.