The Invisible Man Appears and The Invisible Man vs. The Human Fly are to be released by Arrow Video this March on Blu-ray.  For the first time these twists of the original H.G. Wells’ classic have been released outside Japan. They are an early example of special effects from Daiei Studio. Daiei was founded in 1942 as a conglomerate of Daito Film, Shinko Kinema, and the Japanese film studio Nikkatsu Corporation. They made Kaiju (strange beast) and Tokusatsu films such as Gamera and Yokai Monsters until they went bankrupt in 1971. This Blu-ray premiere includes an aficionado booklet and new invisible man documentary, nicely completed with excellent Graham Humphreys art-work. 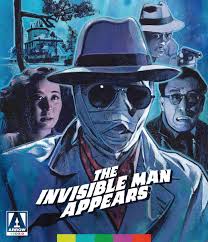 The Invisible Man Appears first arrived in Japanese theaters on the 25th of September 1949. The original title being Tōmei Ningen Arawaru, it is classified as Tokusatsu, which means “special effects”. This film has quite a claim to fame, being the earliest surviving Japanese science fiction film ever made. On top of that, this is one of Eiji Tsuburaya’s first special effects ventures, in five years he is to be praised for his special effects in Godzilla.

The Invisible Man Appears opens with the warning “There is no good or evil in science, but it can be used for good or evil purposes” which is apt, as you will find out. When two scientists compete to discover the secret of invisibility, a serum is developed which can make animals and people disappear. In the science lab, an invisible moggy escapes as two masked criminals enter the room to kidnap the professor behind the imperceptibility invention. The invisible cat scampers around the house knocking over ornaments, unseen feet walk across piano keys and transparent paws leave wet footprints. Instead of bringing fame and fortune, the discovery causes only misery. The inventor is kidnapped and forced to use the amazing discovery for evil and steal Japans’ most precious jewel necklace ” The Tears of Amour”.

As the professor is now missing his family searches for him in vain. They are unable to find him as he is in the evil clutches of the crooks, the prof. has been sent to the jewelry store to steal the necklace. At the store, he removes his bandages to show that he is invisible and strikes terror into his victim. Within these early images you will experience some of the very earliest special effects, as the mysterious man enters Tenpodo Art Store, he removes his bandages to reveal he has no face, no head, no neck, he is an invisible man. He attacks the store manager and escapes before the police get the chance to arrive. A few moments later a drunk businessman staggers home in a stupor. He is attacked by the transparent man who steals his clothes. A local bobby spots the altercation and this time the tale of the imperceptible man is believed. The story hits the newspapers and it is suspected that the professor is the deranged villain. The hunt is on, the police now know a violent invisible mad-man is terrorizing the city.

This of course opens the way for a multitude of invisible man special effects. Curtains are drawn by an unseen figure, we enjoy a floating vase, a gun that fires on its own, and even a levitating cat makes an appearance. This movie has plenty more early special effects including a knife wavering through the air on unseen wires to stab an oblivious victim and pinch the jewelry box with invisible hands. The violence escalates, as the see-through man succumbs to the side effects of invisibility, which makes him more and more unstable. The secret of the missing professor is soon to be revealed.

The Invisible Man vs. The Human Fly 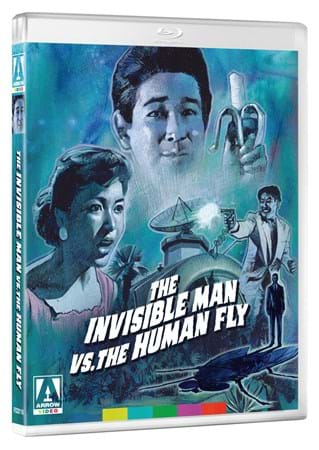 In Mitsuo Murayamas’ The Invisible Man vs. The Human Fly, we discover that murder is afoot, with one thing linking a series of crimes, a weird buzzing noise. Can this be tied in with bizarre wartime experiments, miniature people, and an invisibility ray, enter the strange world of Mitsuo Murayamaf to find out? When an invisible policeman becomes entangled with a dangerous killer we are in for an unusually strange science fiction adventure.

In post-war Tokyo several people have been stabbed, it’s a complete mystery as there’s no evidence to explain how the crimes are committed. This off-the-wall gem of cinematic history opens during a plane flight, suddenly a scream echoes throughout the airplane as a dead body is found. The mystery unravels to a strange warbling operatic soundtrack. We soon find out that a man has been murdered in the restroom of the plane. The police are unable to work out how this could be murder, as the perpetrator couldn’t escape from the plane unnoticed. The police have a string of unsolved murders without any clues. There is no way to prove it but they feel that they must be connected. The stabbings continue, a lady out walking is stabbed, but no-one sees her assailant even though it is broad day-light. The police stalk a potential murder victim, who is stabbed right before their eyes and yet they still see no assailant, the only thing they hear is a strange buzzing sound, like that of a housefly.

They’ve had some extra fun with this second film creating some new rules for the see-through man. I suspect so that even more special effects can be squeezed in, we witness a floating head and dissociated hands. The reasoning behind this aberration is that the invisibility technology does not work on skin exposed to sunlight. There’s plenty more film magic coming up when we get a chance to peek at the human fly. To avoid raising a spoiler alert, all I will say is, the human fly is quite different from the one you are expecting and bound to tickle your ribs. It all makes for somewhat of a mystery that may well be tied up with a group of war-time scientists and their cosmic-ray experiments. When one of the scientists feels betrayed he bides his time planing sweet revenge and in doing so unleashes a puzzling science fiction escapade that is bound to enthrall you.

This release is out on Blu-ray on the 15th March 2021, in black and white in Japanese (Mono) with English subtitles. Both films are presented on one disk and have been obtained from the best surviving film elements, which in both cases are 16mm exhibition prints. Both transfers feature anomalies such as picture weaving, scratches, and exposed film edges that have not been repaired so as not to further compromise the integrity of the original image. This for me added to the films rather than detracted from them.

There’s a nice selection of extras accompanying this pair of films, including:

The pair of films are well acted and intriguing on many levels, this being the first time they have been released outside Japan. They are a fascinating view of Japanese culture at the time, whether genuine or contrived. It is interesting to see how Japan is portrayed in both films with cinematography shot in a very American style. The visual imagery, laboratories bursting with invisibility ray generators, and bubbling glassware are highly entertaining. The special effects make for fascinating and absorbing viewing.

If you enjoy discovering the history of film you will surely savor these curiosities, they are as much fun as you imagine. What is extremely apparent is the enthusiasm with which these films have been made. This is quite clearly demonstrated in the trailer. These films do feel like a labor of love, all involved are excited by their achievements and future possibilities. They have improved on their technics between the two films raising the bar in the quality of the trickery. making for a double bill of whimsical enjoyment.