Albert Brooks isn’t that well-known a name in the UK, certainly not compared to many of his comedy contemporaries. And yet chances are most people have come across Brooks in some capacity. Many people will know him from his voice work as Marlin in Finding Nemo or Hank Scorpio, Brad Goodman, Russ Cargill and various other characters on The Simpsons. Some may know him as the villain from Nicolas Winding Refn’s Drive or for his Oscar-nominated performance in James L. Brooks’s Broadcast News. You may even recognise him from his small roles in Taxi Driver or Out of Sight. But it is as a comedian and filmmaker that Brooks is most underrated. Actually, underseen would probably be a better word, since he has received acclaim in both capacities. His self-reflexive stand up influenced the likes of Steve Martin and Andy Kaufman and his short films for the fledgeling Saturday Night Live are highlights of those early shows. Perhaps it was these early works that started Brooks on the road to becoming a director of feature films and his small, rarely-seen oeuvre contains several real comedic gems. Fortunately, Criterion are helping to rectify this with the welcome release of two of Brooks’s films. 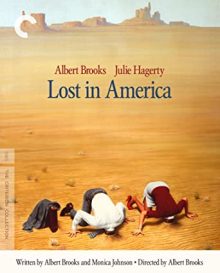 Lost in America is perhaps Brooks’s best-known film, although it is still rarely screened or discussed in the UK. A satire on Baby Boomer yuppies and the erosion of their 60s ideals, it follows the story of David and Linda Howard who, in the face of David not receiving his expected promotion, rashly decide to liquidate their assets, drop out of society and spend the rest of their lives travelling the country in a Winnebago. What begins as a naive dream quickly descends into a living hell as the couple find themselves at the mercy of a scarier side of America than they were prepared for.

Part of the fun of Lost in America is watching it unfold so I’ll refrain from giving away too much more of the plot but the horrendous situation the Howards find themselves in (and it is a genuine nightmare) also throws up hilarious scene after hilarious scene. Brooks is great as David, playing his usual neurotic, wisecracking take on himself that he has perfected across several films. The early scene in which he is told he will not be getting his promotion is one of the funniest scenes I’ve ever encountered. I remember being almost doubled over with laughter the first time I saw it years ago and it still has the same effect now. There’s also a fantastic scene in which he confronts the owner of a casino which is perhaps the film’s most famous moment. Julie Hagerty, known to comedy fans for deadpanning her way through Airplane!, is also very funny as Linda who starts out seeming like the cautious, level-headed character before a key plot event changes all that. 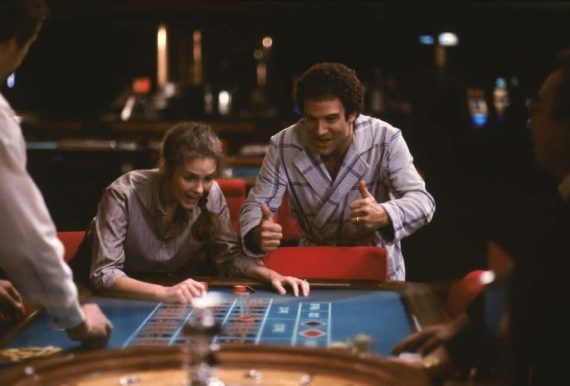 Lost in America could’ve been mean-spirited but Brooks approaches his subject and characters with a warmth and understanding. Though the Howards’ patronising aspiration to “touch Indians” clearly makes them figures of fun, Brooks is sending up his own generation and the ideals he grew up with. We laugh at the characters but we are also encouraged to sympathise rather than revel in their downfall. In fact, if Lost in America does put a foot wrong it is in the closing caption which somewhat softens the satire when it could’ve benefited from being left more open ended. Brooks’s earlier films Real Life and Modern Romance, both much more cynical concoctions, also used these closing captions which felt like a last minute cop out there too. But such a minor quibble cannot undo the fine work done beforehand and it’s cause for celebration that Lost in America will soon be found in the UK. 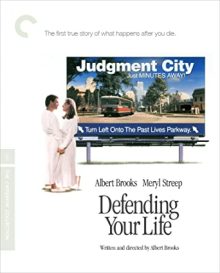 Brooks’s next film, Defending Your Life, has an altogether softer feel than his earlier satires but Brooks shows a deft touch for rom-com fantasy as well. Daniel Miller (Brooks again) is an LA advertising executive whose superficial existence is cut short by a car crash. Finding himself in Judgement City, an idyllic purgatory, Daniel is told he must stand trial and prove to a court that he has conquered the fears that govern human existence. If he fails to convince the court, he will be sent back to Earth to begin from scratch rather than pass into the afterlife. Staying at a Judgement City hotel during the trial process, Daniel meets and quickly falls in love with Julia (Meryl Streep), a ludicrously perfect woman who will obviously have no trouble advancing to the next stage of existence. Suddenly, the stakes are higher for Daniel to prove himself before the court.

Defending Your Life is a gentle, fun and sometimes moving family comedy which gets to grips with some real existential issues. The story is taken at a leisurely pace allowing the viewer to drink in the attractions of Judgement City. Brooks is enjoyable as always in his central role, while Streep shows her impeccable ability to adjust her acting style according to the film she’s in, here opting for a much lighter approach in which she is captivatingly sunny and manages to humanise what is essentially a pretty thinly written female lead role. The courtroom scenes, in which Daniel watches videos of his past and is asked to explain his choices, are the crux of the film but Brooks uses them sparingly, interspersing them with scenes of Daniel and Julia’s burgeoning romance and plenty of whimsical comic interludes. 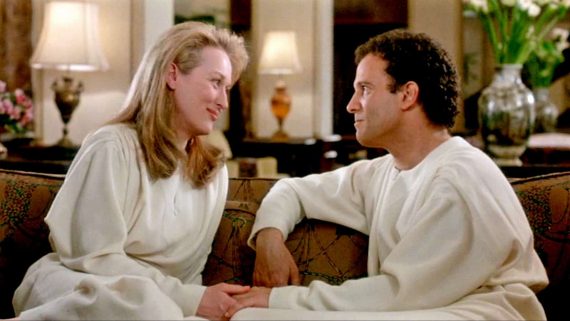 If Lost in America is harder-edged in its satire, Defending Your Life is a pleasant companion piece with its lighter touch and melancholic sense of philosophy which plumps for a more obviously humanistic tone. Both films are potential crowdpleasers in their own way and deserve to be more widely seen. Hopefully these releases with help bring Albert Brooks work to more people and facilitate the release of more of his work in the future.

Lost in America and Defending Your Life are released by Criterion on Blu-ray on March 29 2021. Special features are as follows:

•New 4K digital restoration, approved by director Albert Brooks, with 2.0 surround DTS-HD Master Audio soundtrack on the Blu-ray
•New conversation between Brooks and filmmaker Robert Weide
•New interview with theologian and critic Donna Bowman about Brooks’s vision of the afterlife
•New program featuring excerpts from interviews conducted in 1991 with Brooks and actors Lee Grant and Rip Torn
•Trailer
•English subtitles for the deaf and hard of hearing
•PLUS: An essay by filmmaker Ari Aster