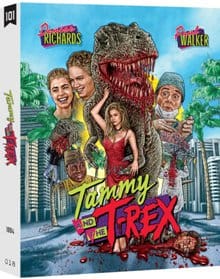 Tammy and Michael (Denise Richards and Paul Walker) are a typical high school couple. She’s a cheerleader, he’s an American football player, they’re both implausibly attractive and very much in love. Alas, Tammy has a violent ex-boyfriend, Billy (George Pilgrim), and Billy has a blood-thirsty gang at his back, none of whom take too kindly to Michael making out with Billy’s girl. So, naturally, they leave Michael for dead in the local wild cat park, and he ends up in a coma in hospital. Meanwhile, Dr. Wachenstein (Terry Kiser) has created a life size mechanical Tyrannosaurus Rex that is currently operated remotely by a computer. Wachenstein has greater ambitions than this, he wants to put a human brain inside the robot dinosaur, and wouldn’t you know it, there’s a guy in a coma at the local hospital… 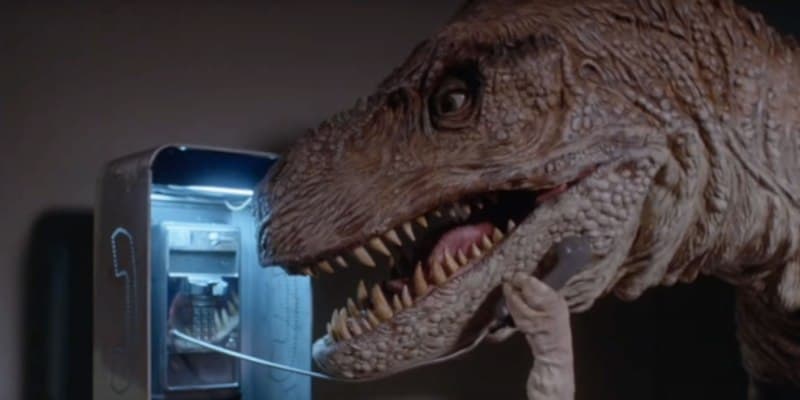 It’d be pretty easy to dismiss Tammy and the T-Rex as just another low budget, so bad it’s awful bargain bin shlock-fest trying to cash in on the monumental popularity of Jurassic Park, released just one year earlier. The special effects are terrible, many of the performances are either over the top or horrendously underplayed and, come on, just go up and read that synopsis again. A mad scientist built a robot dinosaur, and wanted to put a human brain in it. Let that sit with you for a moment. Bear in mind that there is little to no explanation of motive for this, other than to see if it works. And that’s without even mentioning the scenes where the robot T-Rex with a human brain tries – and succeeds! – to use a payphone, or strives to communicate via playing charades. Also the deaths are ridiculously gory – this is the recently released Gore Cut, with roughly 8 minutes of bloody pulp and viscera added back in – so again, it’s easy to dismiss this as being only for fans of bad films.

There are two elements that save Tammy and the T-Rex from that fate. Firstly, it’s hilarious. Writer-director Stewart Raffill, who also created the likes of Mac and Me, Mannequin Two: On The Move and co-wrote Passenger 57, knows exactly what kind of film he is making, and tailored the script accordingly. He knows that the people watching this film aren’t expecting an anatomically correct dinosaur, so it’s infamously teeny tiny little arms will enter the screen from any angle they ruddy well like to best suit the scene. There’ll be a fight between two guys that ends in them both wrenching on each others’ genitals. When approached by a monstrous predator, a terrified lady will pause to finish placing a bet with her bookie. The robotic T-Rex will literally shed a literal tear down its synthetic, non-living face. It’s wonderful. 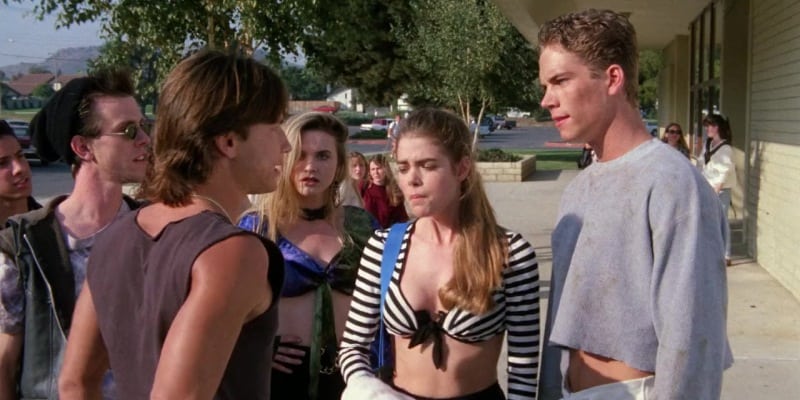 And secondly, if you really want to appreciate this film then you have to dig into the story behind the making of it. A month before filming had finished, the concept for the film didn’t even exist. Literally all that did exist was a theatre owner, who happened to have an animatronic T-Rex for the next few weeks. He hit up Raffill, suggested making a film, and left the director to it. So within a month Raffill wrote the entire script, cast the film, and shot the whole damn thing. So yes some of the line readings are a little stiff, but that’s because there wasn’t time for even a second take. And yeah, some of the costumes are bananas – Wachenstein’s partner Helga (Ellen Dubin) seems to be dressed in rejected outfits from Barbarella, Tammy attends a funeral in a low cut red velvet dress and Michael spends most of his time in a long-sleeved, cropped grey shirt – and some of the supporting performances are playing for the people right at the back (drunk Uncle Bob and Wachenstein’s computer guy, I’m looking at you) but it all added to the fun of the viewing.

As is the case with most comedies from this era, some scenes haven’t aged too well. Tammy’s gay best friend Byron (Theo Forsett) is played so camp it’s like he strolled out of a surprisingly diverse Carry On film, and the racist, homophobic cops (Buck Flower and Ken Carpenter) provide unwelcome flashbacks to Sheriff J. W. Pepper from the Roger Moore James Bond era, yet it feels like their bigoted comments are meant to actually be funny rather than cringe-inducing. Also some of the gore was a bit too much for me, particularly the brain-removal operation, but I’m not much of a horror fan so there are definitely folks who will appreciate this far more than I did. 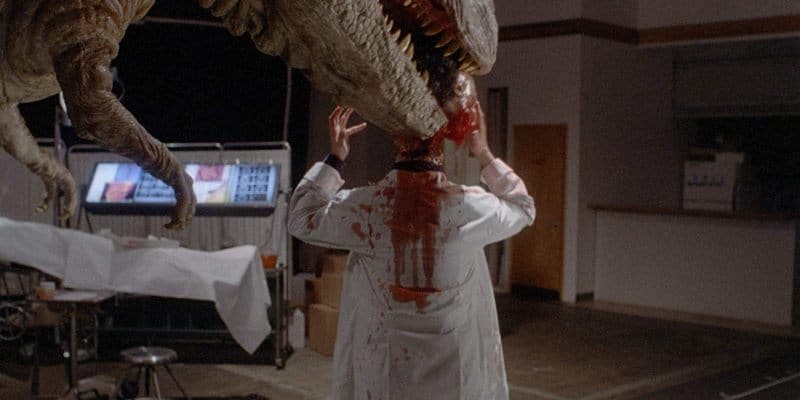 Back in the positive column, there’s a truly stellar opening rock song from Simon Stokes, the plot took some genuinely surprising turns and whilst not all the acting is fantastic, everyone was at least giving it their all and taking some swings with the script. If you’re a fan of David’s semi-regular Weekends of Trash features here, then Tammy and the T-Rex should be added to your watch list immediately.

Tammy and the T-Rex is available now on Blu-Ray from 101 Films. The Blu-Ray transfer is mostly good, although some night scenes with the dinosaur running are quite grainy due to the animation style used. A limited number of copies are available with special packaging and a booklet, but all the copies contain special features including audio commentary from director Stewart Raffill and producer Diane Kirman, interviews with cast and crew – including Denise Richards and Sean Whalen – and the original, bloodless PG-13 cut in standard definition.