After a hugely successful theatrical release which was unfortunately somewhat reduced in size due to the closure of many cinemas, Peccadillo Pictures are proud to announce the release of A WHITE WHITE DAY on DVD, Blu-ray and on-demand on October 5th.

To celebrate the film’s release, Peccadillo Pictures have offered us two copies of the film on the format of your choice (Blu-ray or DVD) to give away to two lucky readers! 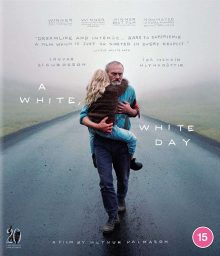 He is a father, a grandfather, a policeman, a widower.

In a remote Icelandic town, Ingimundur (Ingvar Sigurðsson), an off-duty police chief begins to suspect a local man of having had an affair with his late wife. Gradually his obsession for finding out the truth accumulates and inevitably begins to endanger himself and his loved ones.

Once you’ve shared/tweeted the competition, you need to email us (subject – A White, White Day Competition’) with your name, format preference (i.e. Blu-ray or DVD) and postal address to: info@blueprintreview.co.uk