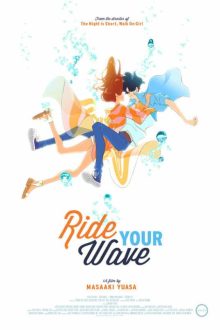 Even as a lifelong animation fan, I remember how cautiously I first approached the world of Anime. For much of my youth as I was nurturing my animation obsession, Anime was less widely available in the UK and the films that tended to get talked about were violent, pornographic extremes that were completely unrepresentative of Japan’s incredibly rich history of animation but which fitted with the prevalent xenophobia of a 90s Britain that regularly reduced all of Japanese culture to images of cheap, humiliating game shows. Like so many others, Studio Ghibli provided my proper introduction to Anime and once the international success of Spirited Away burst that dam, I could scarcely believe the wealth of astonishing films that came flooding out, many of which had existed for decades. With Ghibli as my jumping off point, I hurled myself enthusiastically into an Anime world which still feels dauntingly large but which I’ve loved gradually picking my way through for the past twenty years or so.

In this respect, the arrival of Screen Anime is a cause for major celebration. Created by British Anime distribution company Anime Limited, Screen Anime is a lovingly curated monthly online Anime festival which makes available four films, one series and a bunch of related bonus material for the affordable price of £3.98 a month or a reduced £39.98 per year. For anyone just starting out with Anime, a great way to navigate your way through the vast amount of content on offer is to find specific directors whose work interests you and this month Screen Anime is focusing on one of my favourites, Masaaki Yuasa. Yuasa’s three previous features all blew me away and are among the most inventive Anime’s I’ve seen. While Mind Game and Night is Short, Walk On Girl are both sprawling, ambitious surrealist films with a keen sense of humour, Lu Over the Wall (which, fantastically, is also available as part of this month’s Screen Anime festival) was the Yuasa film I most fell in love with. Though often seen as a more conventional work, this tale of a ningyo, a humanoid-fish creature from Japanese folklore, successfully fused a more traditional narrative with Yuasa’s flair for the bizarre. So when Screen Anime announced that Yuasa’s latest film Ride Your Wave was their ‘Hot New Film’ this month, I jumped at the chance to review it. 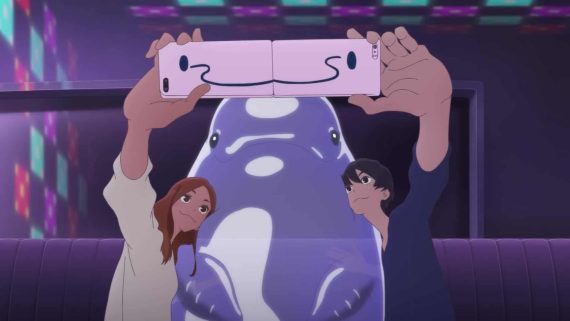 It’s difficult to summarise Ride Your Wave without mentioning a key plot point so please note that this review does contain a spoiler for a plot point that occurs about 30 minutes into the film. It shouldn’t affect most viewers’ enjoyment too much but those who like to go into a film completely cold should stop reading at this point. Hinako is a keen surfer who moves to an oceanside apartment to attend college. When an illegal fireworks display sets fire to her building, she is rescued by Minato, a young firefighter. When Minato asks Hinako to teach him how to surf, a romance blossoms between the two across one glorious summer. But when Minato impetuously attempts to go surfing alone he is tragically drowned, leaving Hinako devastated. Despite striking up a casual friendship with Minato’s cynical sister Yoko and his former colleague Wasabi, Hinako cannot get over Minato’s death and is delighted when she finds that she can summon his spirit in water by singing the song ‘Brand New Story’, a meaningful tune from their courtship. Although Hinako can now spend time with Minato again, she appears to be the only one who can see him. And if her conversations with water bottles and toilets aren’t enough to raise eyebrows, her attempts to get around their inability to touch each other by carrying around a lifesize, water-filled rubber porpoise lead Yoko and Wasabi to seriously question Hinako’s sanity. 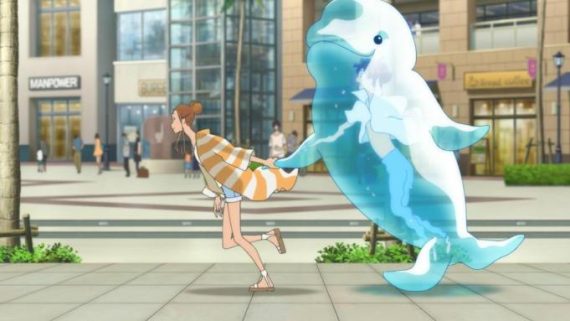 I knew little going into Ride Your Wave, except that many, including the director himself, had described it as a more straightforward film than his previous works. In many ways this is true, as the film follows several romantic plots which would comfortably fit into an American Rom-Com. When the first big plot twist comes at the half-hour mark with Minato’s death, I was concerned that the film might be headed into maudlin melodrama but instead this was the catalyst that unleashed Yuasa’s penchant for the bizarre and from thereon in the film became evermore fascinating. Which is not to say that the first half hour is not delightful in its own right. Those who prefer a purely upbeat tale could easily watch the first half hour of Ride Your Wave as a standalone short, as it neatly and upliftingly charts the blossoming of love with the breeziest of light touches. And even before the more oddball plot points kick in, Yuasa’s trademark style is much in evidence. The fluidity of his animation is utterly charming, sidestepping the stiffness that can occasionally afflict lesser Animes. Water plays a big part in many of Yuasa’s films and unsurprisingly that is the case here, but his characters move as fluidly as the liquid on which they glide.

As much as I enjoyed Ride Your Wave’s opening act, I did wonder how much longer it could sustain such a clear-cut romance. So when the rug is pulled out from under the viewer, the transformation of the film is instantly as refreshing as a wave in the face. Yuasa deftly juggles tones, carefully ensuring he never downplays the impact of Minato’s death while also pushing past such unnecessary scenes as loved ones hearing the news or burials observed from a dignified distance. Instead, Yuasa uses Hinako’s emotional aftermath to sustain the tragic element while also using her desperation to cling to Minato’s new liquid manifestation to generate a neat strand of black comedy. Prolific screenwriter Reiko Yoshida, perhaps best known in the UK for her script for Ghibli’s The Cat Returns, has here created a fascinatingly strange screenplay and got it into the hands of the perfect director. There are a few more hokey metaphors about the importance of “riding your own wave” than I really care for but while a lesser director would’ve killed the film by focusing with chin-stroking intensity on this angle, Yuasa manages to maintain the message without pushing it clumsily to the forefront. 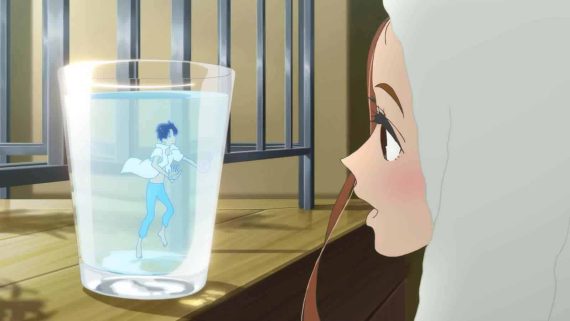 Ride Your Wave is perhaps destined to be regarded by many as minor Yuasa but it is the sort of film that is all the more charming for that being the case. His previous films are so stuffed with event that they demand close attention but Ride Your Wave is constantly breezy and lightly enjoyable, even as it digs into issues of grief and loss. I admit I had doubts as to whether Yuasa would be suited to what was apparently a straightforward Rom-Com but, as it turned out, he more than rose to that deceptively difficult challenge. He simply made his own take on straightforward and that just so happens to include a giant rubber porpoise and a dead boyfriend appearing in a toilet bowl. We all have to ride our own wave, after all.

Ride Your Wave is available now until late August at www.screenanime.com. Also available during that time, and essential to check out, is Yuasa’s previous gem Lu Over the Wall, which appears under this month’s Festival Favourites banner. The Festival Classic this month is Sunao Katabuchi’s Mai Mai Miracle, a visually striking if somewhat tonally confused film from the director of the wonderful In This Corner of the World, while the Curious Curation comes courtesy of Anemone: Eureka Seven Hi Evolution 2, the bonus material for which includes the entire preceding film Renton: Eureka Seven Hi Evolution 1. This month’s Series Marathon is Silver Spoon Season 2. All films are available in both subtitled and English dubbed versions (with Silver Spoon available with subtitles only) and trailers for all the content are also included. Mai Mai Miracle also includes a 15 minute bonus interview with ADR Director Michael Sinterniklaas. This is a hell of a generous package for £3.98 and I couldn’t recommend the excellent work Screen Anime is doing more highly.