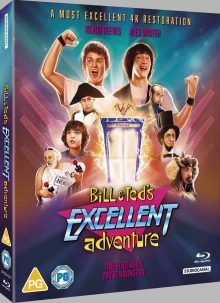 Before I start my review I have to be honest and say that Bill &Ted’s Excellent Adventure has great sentimental value to me as my brother and I used to watch it constantly as kids. We used to know it off by heart and quoted it endlessly. So, my ability to objectively review this without a haze of nostalgia affecting my opinion is nigh-on impossible.

Bill & Ted’s Excellent Adventure started life as a comedy skit surrounding the titular characters, devised and performed by college buddies Chris Matheson and Ed Solomon. They enjoyed the characters so much they knocked together an idea for a script back in 1984 and sent it out to the Hollywood studios, in the hope that someone would pick it up. It eventually got snagged by Warner Brothers who dropped it a little while later, but their involvement helped the writers hone the script, including changing the original title and some other details. It was originally going to be called Bill & Ted’s Time Van but with Back to the Future out in 1985, they wanted to change the time travel device. Plus, it was a pretty weak title to be honest.

The project later ended up with Dino de Laurentiis and his De Laurentiis Entertainment Group (DEG), who funded the fairly low-budget production. The shoot was reportedly a blast, with the young cast and crew hitting it off together. However, DEG went bankrupt while the film was in post-production. Director Stephen Herek and the producers desperately tried to show the rough-cut around town and managed to get it picked up by Nelson Entertainment and Orion Pictures, who got it out to cinemas after the makers were worried it’d end up airing only on cable TV or being shelved completely.

It’s a good job Bill & Ted’s Excellent Adventure did hit cinemas as it proved to be a surprise hit. It made $40.4 million in the US alone and was a cultural phenomenon, with Bill and Ted’s ‘language’ becoming commonplace with teens in America and beyond. It spawned both animated and live-action TV series, video games, a comic and also a sequel in 1991, with Bill & Ted’s Bogus Journey. Now, over 30 years later (God that makes me feel old), it’s getting a second follow-up, with Bill & Ted Face the Music, due for release at the end of August (maybe).

To celebrate the latest sequel, Studiocanal are releasing the film that started it all in a newly remastered edition on 4K UHD, Blu-ray and DVD in the UK. Realising I hadn’t seen the film since wearing out my taped-off-TV VHS copy, I eagerly snapped up a Blu-ray to review the film.

Bill & Ted’s Excellent Adventure centres around Bill S. Preston Esquire (Alex Winter) and Ted Theodore Logan (Keanu Reeves), a couple of high school students who are in a band together called Wyld Stallyns. They’re also in danger of flunking out of school, particularly if they fail a vital history assignment. On top of this, if they do flunk out of school, Ted’s dad is sending him straight to a military academy in Alaska, so the friends will be separated and the band will come to an end.

The pair grab a pile of history textbooks to attempt to cram for the next day’s report, but Bill and Ted are not the sharpest tools in the box, so their chances of passing look slim.

However, luck comes in the surprising form of Rufus (George Carlin) who has come from the future and appears out of the blue in his time-travelling phone booth. He explains to Bill and Ted that, in the future, their music will lead to world and intergalactic peace, bringing harmony across the universe. It’s vital that they pass that history report, so he lends them a time-machine so they can travel back in time and collect world figures to be part of their project. The present-day clock ticks at the normal rate though, so they must get the job done quickly, ready to present to the rest of the school the next day. Of course, things go wrong along the way, to make this more difficult than they’d have hoped.

There’s always a worry that a film you love as a youngster won’t be as good as you remember when you watch it many years later. However, I still had an absolute blast with Bill & Ted’s Excellent Adventure and I do believe it’s a better film than many give it credit for.

For one, Matheson and Solomon’s script is fantastic. The dialogue might sound dumb on the surface, with Bill and Ted’s unique surf-dude/Valley-girl hybrid way of speaking, but there are actually a lot of witty and very funny lines in there, riffing on the central pair’s poor knowledge of history and unique outlook on life. I think their style is best described in the words of David and Nigel from This is Spinal Tap, as treading “a fine line between stupid and clever”.

Also key to the success of the film is the chemistry of Bill and Ted. Some big names were reportedly in the running for the roles (or at least they became big), such as River Phoenix, Sean Penn, Brendan Fraser and Pauly Shore, but it’s hard to imagine anyone other than Keanu Reeves and Alex Winter filling their shoes now. They nail the mixture of clueless and lovable and work perfectly together. During the production there were worries, and I’ve also heard some criticise the film for it on release, that Bill and Ted are too similar to make a strong duo, but I disagree. I think there are subtle differences between them. Bill is a little brighter than Ted, but Ted has a little more heart. If they went too far in differentiating the pair, I don’t think they’d have made such convincingly close friends.

That friendship is part of another thing I love about the film, it’s tone. Most teen movies are cynical and focus around sex or drugs/alcohol. Bill & Ted has none of this (or at least very little – Bill’s step-mum is young and attractive and the film milks this for all it’s worth). Instead, it presents characters that are incredibly nice to everyone. They have a sunny outlook to everything, only getting mildly melancholic when things are really against them. They always quickly bounce back though and their friendly attitude is infectious, leading to a film that’s utterly charming.

The time travel aspects don’t get as mind-boggling as in some other entries into the genre but good use is made of the concept, particularly in a prison escape scene towards the end (though that trash can bit makes little sense in terms of how it’s physically set-up). Numerous moments defy logic, but in a high-concept film from the 80s, you wouldn’t expect or even want everything to make perfect sense.

The film has dated a touch perhaps. The special effects are ‘of their time’ and obviously telephone booths are little seen nowadays. There are also a couple of lines that might be frowned upon now (notably the ‘fag’ reaction to Bill and Ted hugging), but, for the most part, this is still as much fun as it was 31 years ago.

I can’t escape my nostalgic love for Bill & Ted, I’m afraid, so I have to give it a perfect score, even if I could pick out flaws here and there. I do genuinely believe it’s a great film though. It’s witty whilst seeming dumb and focussed around two of the most lovable characters in cinema history. Your taste for high concept, zany 80s adventures will be key to your enjoyment, but I think there’s enough sharp humour, exuberance and warmth in the film to win over even the hardest of hearts.

Bill & Ted’s Excellent Adventure is out on 10th August on 4k UHD, Blu-Ray and DVD in the UK, released by Studiocanal. I watched the Blu-ray version and it looks and sounds fantastic. Detail and colours are rich and the print is as clean as a whistle without losing its filmic look.

The disc is loaded with special features too:

A lot of this material was included in the previous Blu-ray release and a fair amount of that stuff is a bit throwaway (like the air guitar video, ‘Linguistic Stylings’ and ‘Hysterical Personages’) but the ‘Original Bill and Ted’ interview is very good. The ‘Scribble to Script’ feature is fantastic too. This presents 120 pages of notes, treatments and script excerpts from Matheson and Solomon’s original idea for the film. It’s great to see what they originally thought up to see how it changed. It would have been a notably different film.

The Steve Vai interview is odd, in that he scored Bogus Journey but had nothing to do with Excellent Adventure, so I don’t know why they added it here. The inclusion of the animated TV series episode is a nice touch though and brought back memories, though it hasn’t held up nearly as well as the film.

The new material is stronger. The two commentaries are excellent in particular. Yes, a number of the anecdotes are repeated elsewhere on the disc, but there’s still plenty of new information in the tracks. Each pair has a strong chemistry too and the film clearly means a lot to all of them, so it’s enjoyable to hear them talk fondly about the experience of making it.

The ‘Time Flies’ doc is backslap-heavy but fairly lengthy (just over an hour) so covers a lot of ground and was made fairly recently, so it’s interesting to see how everyone has aged and how they see the film after time has passed.

So, a fantastic package all round that comes highly recommended to anyone that enjoys the film.