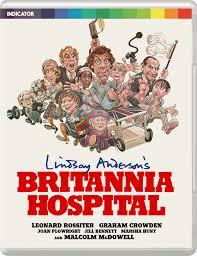 Britannia Hospital was directed by Lindsay Anderson in 1982, it is not what I expected, it’s remarkably current. Dripping thickly with satire in Thatcher’s Britain. This is the last of Lindsay Anderson’s trilogy following the exploits of Mick Travis. The other two in the series are If…. and O Lucky Man!. You’re treated to a star-studded cast including Alan Bates (Georgy Girl) and Joan Plowright (Time Without Pity). Robin Askwith (Confessions of a Window Cleaner), Mark Hamill (Star Wars), and Malcolm McDowell (A Clockwork Orange) as Mick Travis. Anderson explores the media, royalty, unions, and scientific research, taking no prisoners along the way. Britannia Hospital certainly slips into the horror genre, on many levels.

Mayhem and chaos open the setting in militant times as pickets line the road outside Britannia Hospital. Union officials stop cars going into the hospital. However, they do let an ambulance through with a dying man in the back. The unfortunate man manages to get as far as reception. Although that is as far as he gets. He is left to die on the ambulance trolley as the staff go on strike. 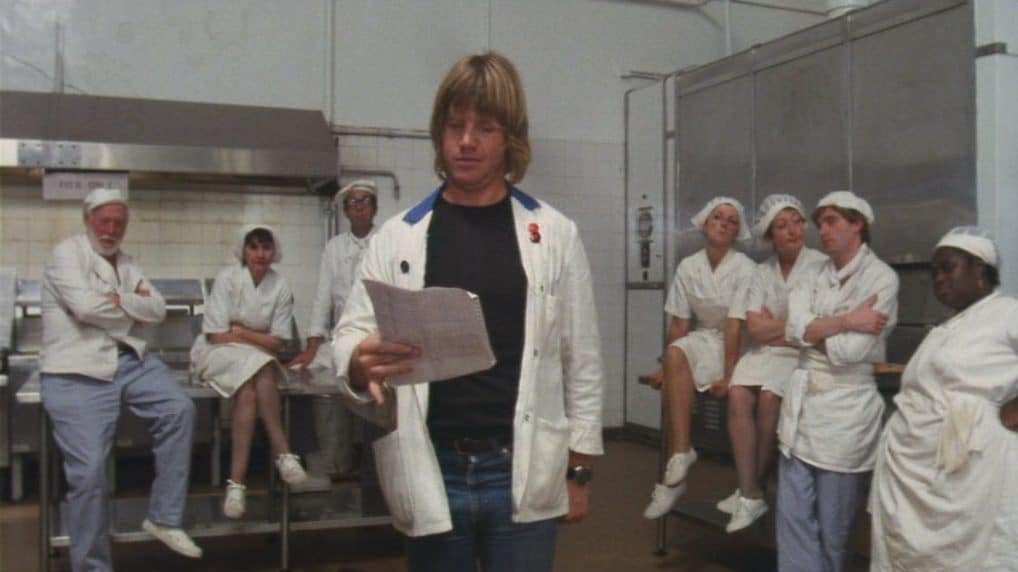 Professor Millar (Graham Crowden) arrives at the hospital, knocking over a picket on his way. Calling him an insect, with apparently no fear of a lawsuit. The rude Prof. goes into his incongruous new wing of the hospital. Inside the building, once through security, he enters a bizarre room containing odd lumps of flesh in display cases. The nutty Professor enters the lift, barely aware of lowlife, Mick Travis (Malcolm McDowell). This suits Mick very well as he is an undercover investigative reporter. Mick makes his way to the roof in an attempt to discover the hospital’s secrets. Meanwhile Red (Mark Hamill) is outside in a surveillance van, in close contact with Mick. Blaring television pictures set the scene showing images of rioting in London. 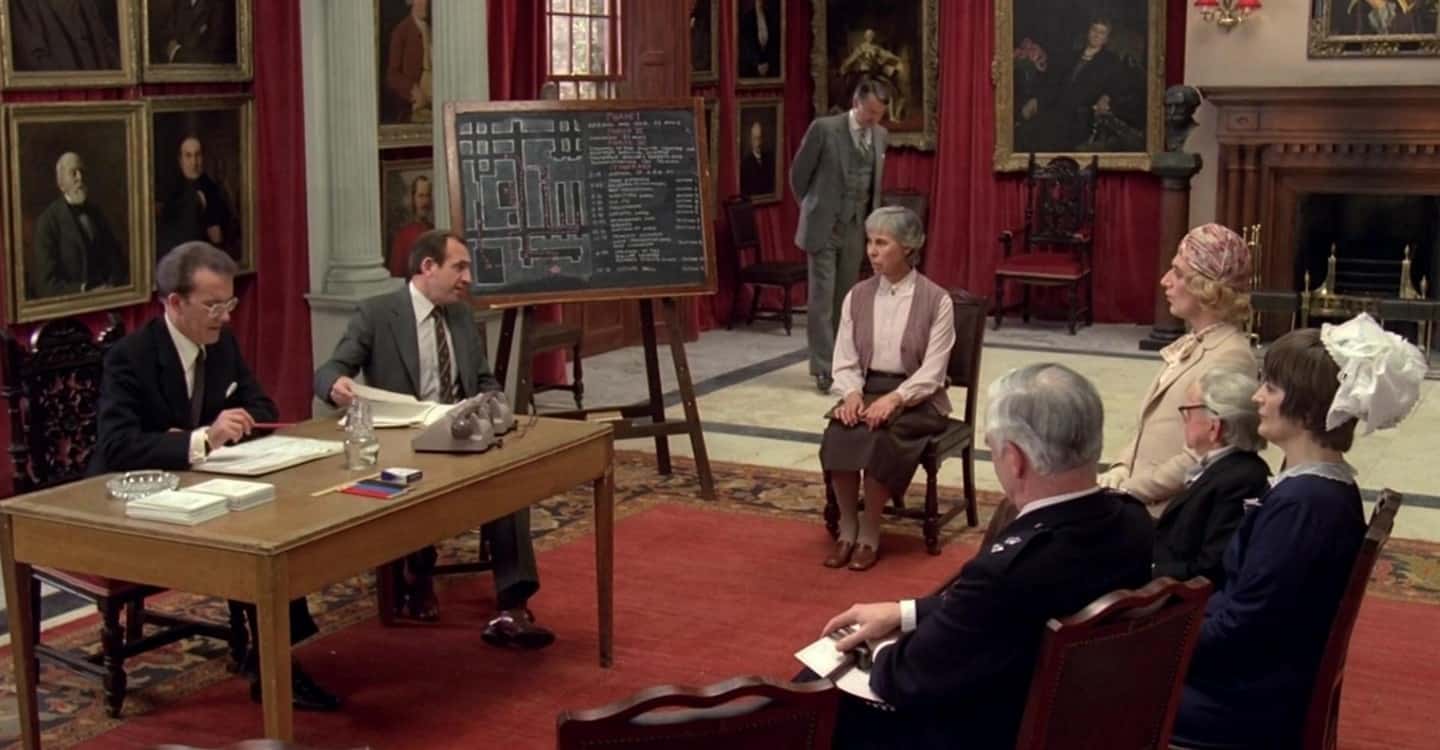 Hospital administrator, Vincent Potter’s (Leonard Rossiter) work-out on his exercise bike is disturbed. Something is brewing, there are protests against a dictator living in luxury within the hospital. Militant hospital workers are adding to the tension as they refuse to cook lavish meals for private patients. They feel aggrieved that all the patients are not being treated equally. 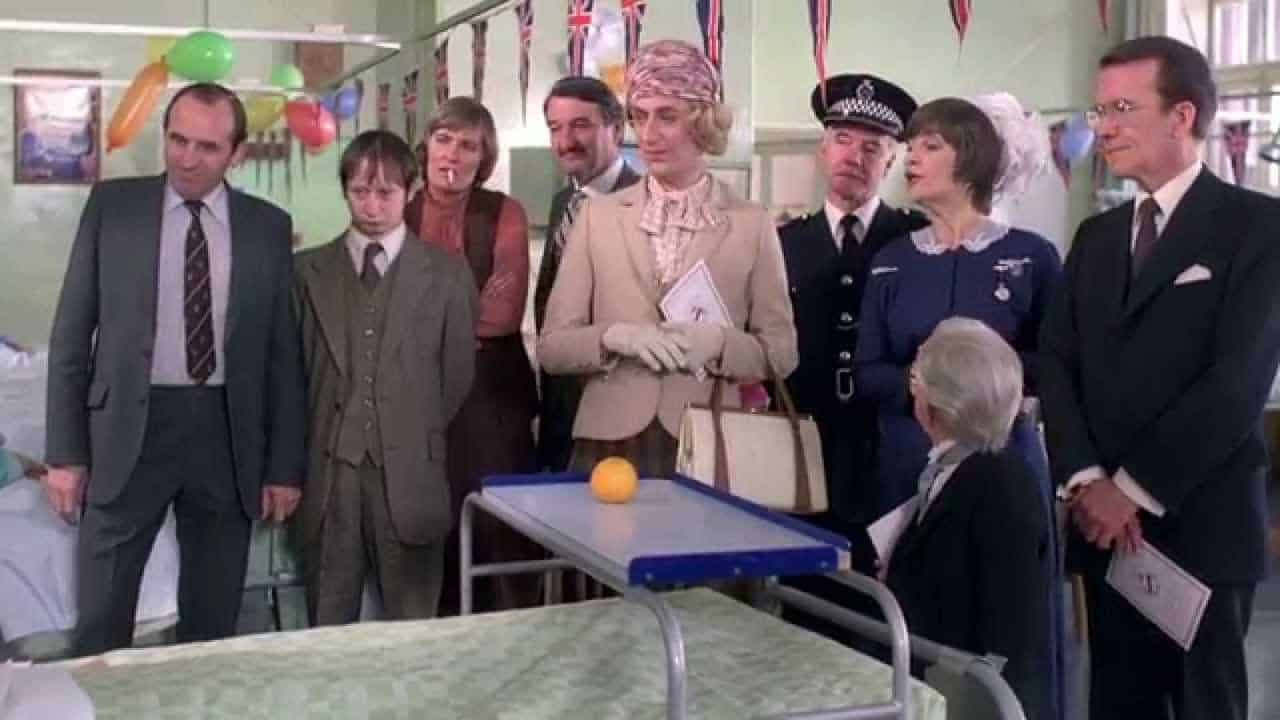 Meanwhile, inside his wing of the hospital, bathed in a sickly green glow Prof. Millar declares “Have you thought how God felt on the sixth day. His love-smitten aid exclaims “When will you release Genesis”. You don’t need to be a genius to realise that this doesn’t sound good. Soon potty Prof. Millar is about to unleash his Frankenstein future on the world.

The collision of events is going to make for an explosive mix. Exacerbated by the tense atmosphere seemingly permeating through virtually every aspect of British life. What’s more, murder is afoot, adding to the chaos inside the hospital while pandemonium brews outside. The bubbling tensions spillover, both inside and outside the hospital as we come to the nightmare finale and discover what Prof. Millar is really up to. 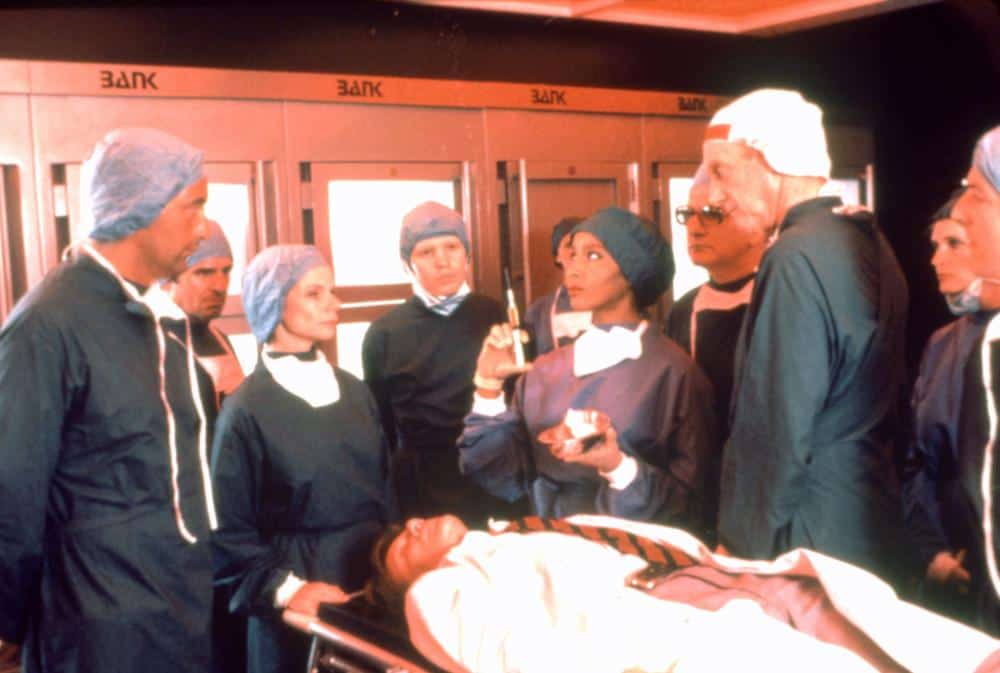 Britannia Hospital is delightfully dark with a rich seam of actors from well-known comic series of the time. The abundance of talent brings a level of gravitas to the proceedings. Twisted humour peeks into the bleak world of 80’s Britain. When initially released Britannia Hospital received a somewhat negative reaction, but some did like it and said so. This is the third of the series although there is not much of a link between them. The previous two in the series fared more favourably. Possibly because Mick made a greater appearance in the lead role in them, or maybe because this is quite different. It could be described as a comedic body-horror satirical romp. With a strong moral compass, Anderson is naming and shaming corporate greed and individuals’ arrogant entitlement. The arrogance and single-mindedness of both sides are seen as the problem. Both sides of the political spectrum blaming the other. Britannia Hospital raises thoughts of a worrying future, especially this possible version. The questions raised in this film seem just as current today. 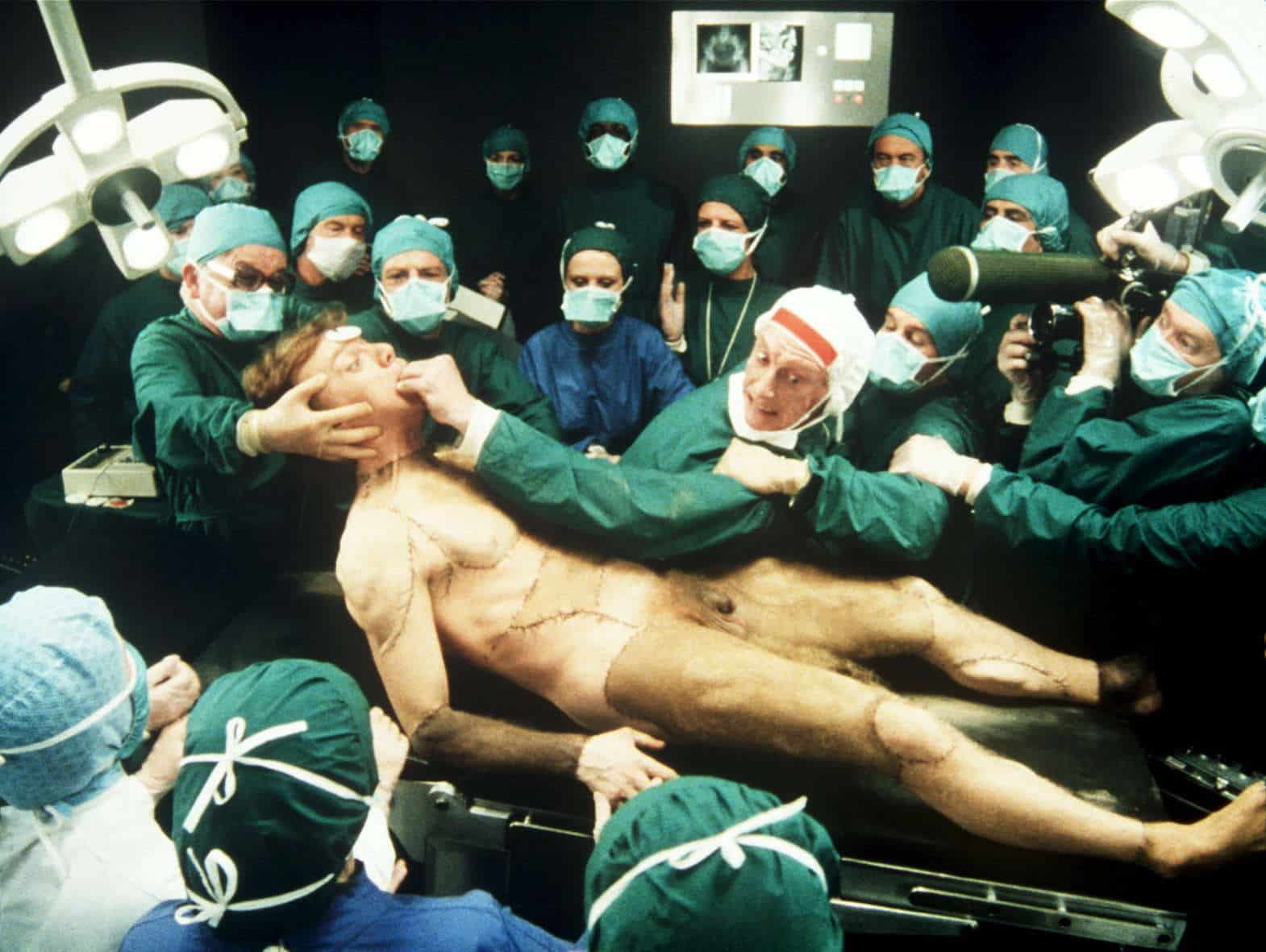 A nice selection of extras give a deeper insight, certainly adding to the enjoyment of owning this slice of political history.

Britannia Hospital is released as a limited edition Blu-ray on the 29 June 2020. This world Blu-ray première disc is of fine quality with sharp audio and visuals.