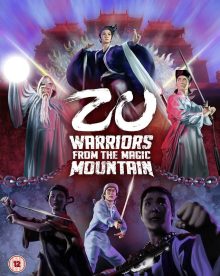 Traditional kung-fu movies were popular in Hong Kong back in the early 80s but they were, to an extent, ‘realistic’. With 1983’s Zu Warriors from the Magic Mountain, director Tsui Hark tried to buck the trend, taking things in a wholly fantastic direction. In the early days, many Shenguai Wuxia (period martial arts movies featuring Gods and Demons) were produced in mainland China but they fell out of fashion over the years and Hong Kong filmmakers never quite latched onto them in the same way, so none had been made for a long time before Zu came along.

Zu wasn’t necessarily made out of nostalgia though. Instead, its producers were hoping to emulate the success of Star Wars, which had brought fantasy and special-effects-driven cinema to great popularity, even in Hong Kong. Zu wasn’t the commercial success they hoped it would be though, despite being well-received critically. However, overseas it was relatively popular, reportedly inspiring John Carpenter to make Big Trouble in Little China. In later years it has found its followers in Hong Kong too and helped pave the way for more commercially successful fantasy films, such as the Chinese Ghost Story series, which was produced by Hark.

Zu is certainly well-loved among martial arts movie fans in the west and Eureka are releasing a beautifully polished Blu-ray of the film as part of their Classics series. I hate to admit it, but I hadn’t actually seen Zu prior to writing this review, so I was desperate to get my hands on the disc. Thankfully, Eureka sent me a screener and below are my thoughts on the film. 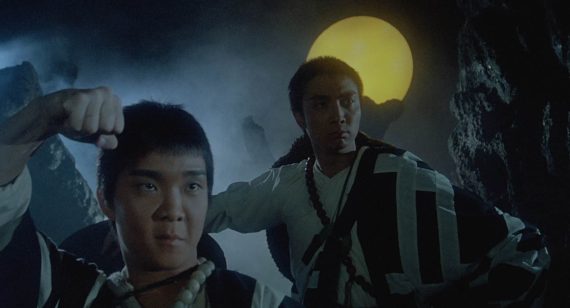 Zu Warriors from the Magic Mountain is set in 5th century China, when civil wars ravaged the country. Ti (Yuen Biao) is a soldier who’s caught between one of these wars and has grown fed up with the constant fighting. He escapes one battle through a crevice in the Zu mountains and meets Ting Yin (Adam Cheng). He’s a martial arts master with magical powers and Ti is so amazed he begs to be his disciple. Ting Yin isn’t keen on this idea, but Ti tags along regardless. When they get attacked by a Blood Devil, Abbot Hsiao Yu (Damian Lau) and his pupil Yi Chen (Hoi Mang) appear and come to their rescue. With further help from Chang Mei (a.k.a. Long Brows, due to his long, powerful eyebrows – played by Sammo Hung) they manage to hold off the Blood Devil, but only for so long. They need to find the Dual Swords to destroy it once and for all.

However, Hsiao Yu was badly injured in the fight and when the group travel to the Celestial Fort to ask its Mistress (Brigitte Lin) for her healing powers, Ting Yin gets possessed by the Blood Devil. This leaves it up to the inexperienced Ti and Yi Chen to find the swords and save the day, aided by one of the Mistress’ guards (Moon Lee).

I haven’t included a handful of other key characters and subplots because, on the whole, the film is rather convoluted. It could easily be described as a mess, but somehow it all makes just enough sense to keep you engaged. The frantic plotting and strange avenues taken are all part of the charm anyway. Plus, the essence of the story is always clear. As it’s knowingly put by Yi Chen in one scene, “they’re bad, we’re good. Get it?” 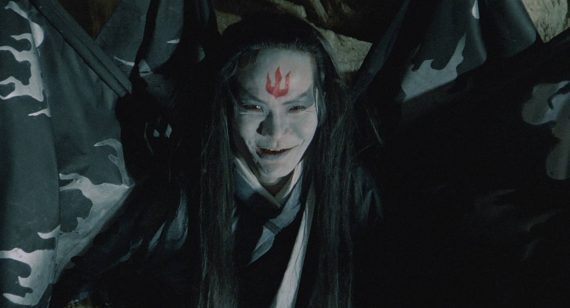 Where the film truly shines is in its sheer energy. The film takes ‘fast-paced’ to another level as it races through its madcap tale of Gods and demons battling in wildly imaginative ways. The film is based on the stories of Huanzhulouzhu (actually named Li Shou-min) though Hark used these more as ‘inspiration’ rather than producing a straightforward adaptation. He and his creative team brainstormed ideas to form the script and reportedly the cast and crew were still adding bits and pieces during production. This ‘everything but the kitchen sink’ approach makes for a thrilling ride that is given further propulsion by Hark’s rapid-cutting style and use of energetic camera movement.

The stylish cinematography and editing are matched by lavish sets and costumes, creating a feast for the eyes. The film took around a year to shoot on a very large budget for the Hong Kong industry at the time, and this effort and expense shows on screen. The special effects are rather dated perhaps but have a certain charm in their bold use of colour. Hark hired some effects artists from Hollywood to advise, as that style of work hadn’t been done in Hong Kong prior to Zu. Many of the effects are done practically too, with a lot of wirework used in particular. You can often see the wires in this sharp 2K restoration but it doesn’t detract from the fun. 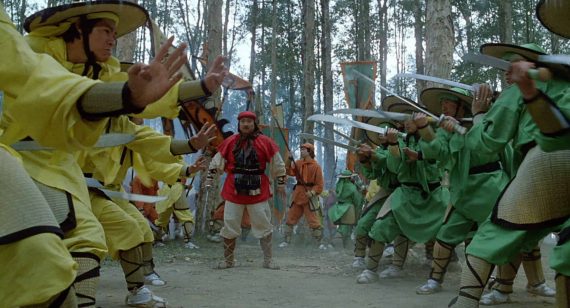 Speaking of fun, there’s a healthy dose of comedy injected into the mix to keep you entertained. Biao and his fellow Little Fortune Hung make a great double act in the opening scenes (where Hung plays a soldier from another side who ends up teaming up with Ti) and there’s plenty of slapstick and low-brow gags scattered throughout. One bizarre sequence sees Ti getting laughed at by a fish he’s trying to catch!

The action is decent too. It’s heavily reliant on magic powers and wirework, so those looking for authentic moves or sustained hand-to-hand combat might be disappointed, but Biao and Hoi get to show off their skills here and there.

Overall then, it’s a breathlessly exhilarating ride whose wild excesses are dizzying. Its endless mayhem may prove tiring for some, but those that can keep up will be swept away by its exuberance. 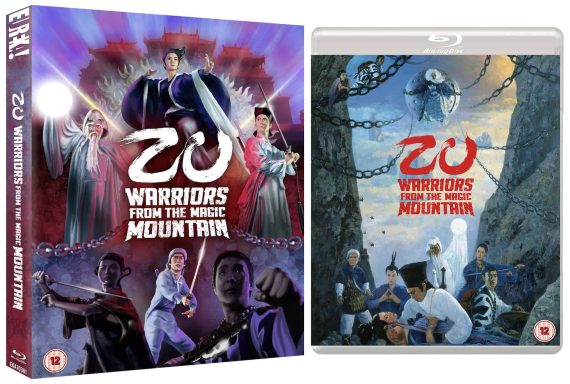 Zu Warriors from the Magic Mountain is out on 20th April on Blu-Ray in the UK, released by Eureka as part of their Eureka Classics series. The transfer looks great, with rich colours, a nice natural grain and a detailed picture. Audio is solid too. I opted for the Cantonese track, but there’s an English dub if you prefer.

You get plenty of special features included in the package:

Tony Rayns’ commentary is as informative and engaging as ever. There are a lot of illuminating facts and stories about Tsui Hark’s career in particular. Speaking of whom, the interview with the director is extensive and well worth a listen. The archival interviews with the cast are decent too, each fairly in-depth and honest, talking about how long and occasionally ‘free-form’ the process was. My favourite feature though is the Son of the Incredibly Strange Film Show episode. As well as another interview with Hark, there are clips from his early work and other crazy Hong Kong fantasy movies. We also catch a glimpse of a young Tony Rayns!

The Zu: Time Warrior version of the film is a real gem too. I was expecting just a brief tacked on intro and coda to set up the film, but the alternative opening is 26 minutes long, making for a wholly different experience. I must admit I didn’t watch all of the mid-section as it’s just a trimmed-down version of the original film once it gets going. With such a long opening before getting to the original footage, there is a lot cut out, so I imagine it’s a bit of a mess, but it’s definitely worth watching the alternative intro and ending. Neither was directed by Hark so it has a totally different style which is much more pedestrian, but it’s interesting to see this new spin on the material.

The booklet is great as always too, so I’d recommend buying this limited edition version before they release it without the booklet further down the line.