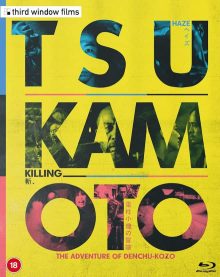 The Japanese director, writer and actor (among other roles in his productions) Shinya Tsukamoto is a fiercely independent filmmaker whose unique, often quite ‘extreme’ visions and styles might not be to everyone’s tastes, but it’s hard to argue about his originality or authorship over his work (give or take a couple of ‘director-for-hire’ jobs). His most famous film is the 1989 twisted cyberpunk masterpiece Tetsuo and he’s got several other well-regarded, if challenging, titles to his name. Third Window Films have been championing Tsukamoto for a while, releasing a number of his films in the UK, and now they’re spoiling us with not only his latest work, Killing, but a box set containing that and two short-feature titles spanning a wide range of his career. These are The Adventure of Denchu-Kozo (1987) and Haze (2005).

The Adventure of Denchu-Kozo (a.k.a. Adventures of Electric Rod Boy or Denchû kozô no bôken) began life as a stage play Tsukamoto devised and put on with his theatre company. After it had finished its run, Tsukamoto didn’t want to waste the effort that had been put into making the sets, so decided to shoot the play as a film. It went on to win the Grand Prize at the PIA Film Fest in Japan, helping lead him onto his next film, his true breakthrough, Tetsuo.

There’s a bit of Tetsuo in The Adventure of Denchu-Kozo (or the other way round I should say), as it has a similar cyberpunk aesthetic and explores the idea of metal fusing with human flesh to form a weapon. In Denchu-Kozo, our young hero, Hikari, suffers from having a utility pole growing out of his back. He’s bullied about it before being saved by a girl named Momo. Hikari is enamoured by Momo and shows her his new invention, a portable time machine. He activates it, which sends him hurtling forward 25 years in time to a post-apocalyptic Earth. Here, vampires are keeping the world shrouded in darkness and Hikari bumps into a gang of these creatures, who set after him. Hikari soon comes across Dr. Sariba, an older woman who is trying to put an end to the vampires’ reign. She tells Hikari that she has been expecting him and believes he is the only one that can save the world. 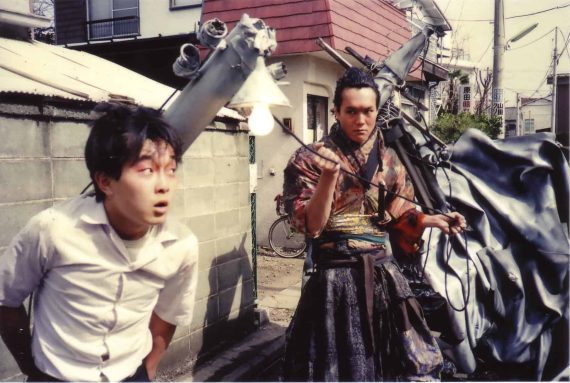 Like Tetsuo, Denchu-Kozo has an intense, energetic style with frantic editing and shaky handheld camerawork. It’s also filled with imaginative low-budget practical effects and inventive visual tricks such as human stop-motion. The film is a feast for the senses and a great example of what can be achieved on a minimal budget.

Although it can be dark and has elements of body-horror throughout, Denchu-Kozo is more outwardly humorous than Tetsuo, with some slapstick and wacky, surreal gags keeping the tone from getting too heavy.

Overall then, it’s a wild and attention-grabbing film that helped pave the way for what was to come. More blatant comedy makes it sillier than what I’ve seen of the rest of Tsukamoto’s work, but that’s not necessarily a bad thing.

Haze has a simple but nonetheless puzzling premise. A man (played by Tsukamoto himself) wakes to find himself in a dark, highly constricted concrete maze. He can’t remember how he got there and has no idea why he’s there either. He has a serious stomach wound so is slowly bleeding to death. He keeps trying to claw out of the space but doesn’t really get anywhere, frequently blacking out and waking in a new area of this bizarre prison. He eventually comes across a woman in the same situation and they ponder what to do next.

This was Tsukamoto’s first digitally-shot film, commissioned by a film festival as a short but later extended into this semi-feature. He continued to use digital cameras in the films he made after Haze, so must have been drawn to the experience. Given that HD cameras were relatively young at that point, the picture quality doesn’t quite hold it’s own against film as it can these days, but the crisp focus and heavy digital grain add a sense of naturalism to the experience. 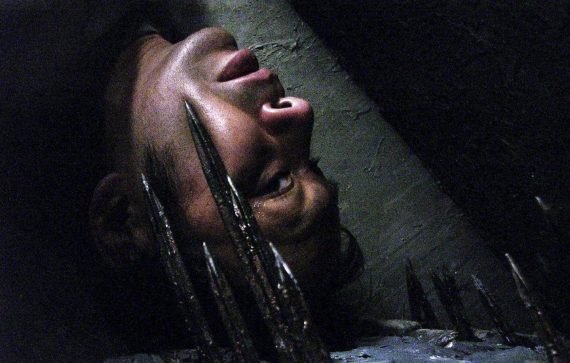 The film plays out like a nightmare though, regularly fading to black then coming back into another horrific situation for our protagonist, with no explanation for the sudden shift. It’s painfully tense and claustrophobic with a couple of scenes that border on unwatchable, they’re so squirm-inducing. The pipe between the teeth scene had me hiding behind a pillow!

The meaning or theme of the film isn’t clear, leaving it up to interpretation and adding to the slightly surreal nightmarish atmosphere. Tom Mes suggests the film could be a modern depiction of Buddhist hell (a.k.a. Naraka). That analogy fits with the series of torments our ‘hero’ is faced with and, depending on how you take the ambiguous ending, the idea of karma sending you there works too.

Speaking of the ending, the final half of the film doesn’t quite have the impact of the first, but it’s still disturbing at times and the actual conclusion, though initially coming across as ‘happy’, could be taken in numerous ways, on reflection.

Overall though, it’s a refreshingly spare horror film that’s unbearably tense and uncomfortable for a good portion of the time. It lacks the wild energy of some of his better-known work but still has quite an impact.

Killing is set during the end of the Edo period in Japan, when the Tokugawa shogunate ruled and the warrior class (i.e. the samurai) were the top of the ‘food chain’, leaching off the hard-working lower classes whilst the closed-off country was at peace. The country was on the cusp of change though as Western warships were invading and demanding trade. Rice merchants were starting to make a lot of money, so the merchant class was rising in power. Whilst many samurai gave up, some clung on to their power and formed militia groups.

In the film, we open with a young masterless samurai (a.k.a. ronin) named Mokunoshin (Sôsuke Ikematsu) helping a farming community during the harvest. A skilled ronin named Sawamura (Tsukamoto again), who is passing through, sees Mokunoshin sparring with a young farmer (Ryûsei Maeda) and asks them both if they will join him on his way to Edo to make an honourable living as a samurai. They both agree and prepare to leave. The farmer’s sister Yu (Yû Aoi), however, doesn’t want either of them to go. She clearly loves Mokunoshin and her brother is nowhere near as skilled as the others in swordsmanship and knows nothing of killing or the code of the samurai. She tries to stop them and, fortunately for her, Mokunoshin falls ill, delaying their departure.

During this time, a tough-looking band of ronin show up on the outskirts of the farm. The farmers are afraid and want their samurai friends to get rid of them. Mokunoshin (prior to his illness) approaches the group and finds they’re more friendly than they appear, so thinks nothing of it. However, when the fiery young farmer/samurai-wannabe gets caught up with them he’s beaten up. With Mokunoshin out of action now to smooth things over, the old-fashioned Sawamura instead wanders over to the unsavoury samurai and butchers most of them. This leads to a cycle of violence and death that Mokunoshin is tormented by. You see, though he’s skilled with a blade, he’s never killed anyone. He’s torn between an innate desire to do so and his conscience telling him he shouldn’t.

Though my synopsis seems long, this is another sparse, pared-down affair, like Haze, though not quite to the same degree. The anti-violence theme is clear, though different interpretations can be made from it and it never feels as straight-forward or preachy as many films with a similar message. 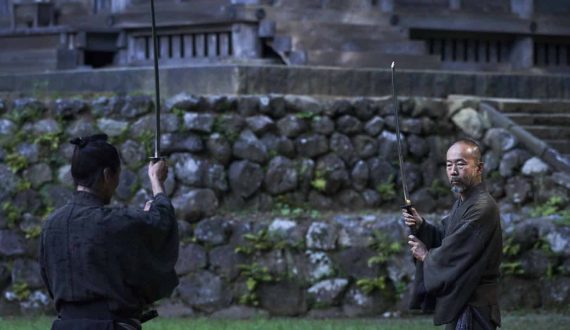 Killing is Tsukamoto’s first jidaigeki (period) film so at first seems out of place within his filmography, but there are similarities to his previous work to be found. The fusion of steel and flesh (here holding a sword) to create a deadly weapon links to the Tetsuo films and others. Fires on the Plain (from what I’ve heard, I haven’t seen it yet) is a similarly brutal indictment of violence too.

Speaking of which, the violence in the film is very well handled. There’s a mixture of the slow, build-up-heavy minimalism of traditional samurai duels and fast, frenetic fights shot with a handheld camera and sharply edited. Both styles (other than in sparring) end showing us the gruesomely detailed result of the action too. Tsukamoto doesn’t hold back on the gore, portraying violence as vicious and painful, not beautiful or stylised. The sharp, clean digital cinematography reflects this too, though night scenes are quite atmospherically lit.

So, it’s an admirably stripped-back, intense examination of what it means to kill. Like Haze, it’s less ‘in-your-face’ in terms of style than Tetsuo and similar, but still has the power to grab you and hold on tight.

Tsukamoto: Killing / Haze / The Adventure of Denchu-Kozo is out on 27th April, released by Third Window Films on (region B) Blu-Ray. Killing will also be available on various VOD platforms. Haze and The Adventure of Denchu-Kozo are available only in the set. The picture and audio quality on Haze and Killing is immaculate, aided by the digital format of the source material. Haze is grainy but reflects the camera technology of the time when used in such a dark setting. The Adventure of Denchu Kozo looks a bit washed out and faded in places and is quite soft but it was shot on 8mm on a minuscule budget so I imagine this is as good as it ever looked. The audio on the film is solid too.
Here is everything included in the set:
BLURAY DISC 1
– Killing feature (80 min)
– Audio Commentary by Tom Mes
– Interview with Shinya Tsukamoto
– Trailer

Mes’ commentaries are excellent. He has a great knowledge of Tsukamoto’s work, so has much to add, and I found his potted history of Japan on the Killing track particularly fascinating. The interview with Tsukamoto is great too. He’s a passionate filmmaker and comes across as quite approachable and honest about his work.

An excellent package then, that comes highly recommended.