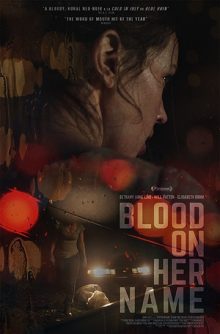 An assured feature debut from director Matthew Hope and co-writer Don M. Thompson that sweats Southern noir from every scene and features a career making performance from lead, Bethany Anne Lind. She plays Leigh, the owner of a struggling-to-get-by auto shop in a little po-dunk Southern town. When we meet Leigh in the opening scenes, she’s in her auto shop bruised, bloodied and battered seemingly having just survived being attacked and now faced with a dead body on the floor. Panicking, she decides to dispose of the body instead of calling the cops but can’t go through with it when a crisis of conscience takes hold. Instead, she’s believes the dead man’s family deserve to know about his death and have the chance to bury him, so leaves the body for them to discover. And so begins a series of bad decisions made by Leigh, no matter her good intentions, that threaten to drag her, her son, her possibly corrupt cop father and the deceased’s vengeful family into a web of deceit and violence.

Blood on Her Name is a short, sharp and oh so dark thriller that grips from it’s opening frames as we follow Leigh and a series of characters living on the lower rungs of society sucked into a life of inescapable crime and violence. While Leigh’s initial decision to not dispose of the body may seem like an odd choice it is in fact the first in a series of clever twists that slowly unfold as we learn of her dark past and her need to desperately escape it, and not end up like the he father and the rest of the town’s folk. Very much slow burn with sudden bursts of tense violence, Blood on Her Name take it’s time in unraveling the motivations of the all characters making this as much a character study as a violent thriller. Director Matthew Hope has a confident grip on the narrative releasing information at just the right time, keeping the viewer guessing until the startling climax.

The setting is just as much a character as any of the players, the slowly rotting town and Leigh’s struggling business providing the perfect backdrop for all the slowly crumbling characters. Yet, it’s Bethany Anne Lind (Ozark, Doctor Sleep) who steals the film with an incredible performance as the ever-desperate Leigh. She may not always make the right decision and her character certainly has shades of grey, but Lind infuses her with a realistic desperation, a women desperate to shed her dark past and make sure her son isn’t stained with the same family blood she was. It’s an outstanding performance and makes one root for Leigh no matter the bad decisions made and how much the odds are stacked against her.

It may be a little rough around the edges due to the low budget and those not accustomed to independent film may find it a little too much of a slow burn but Blood on Her Name is a dark and often startling neo-noir that is ultimately rewarding due to its commitment to telling an adult story and highly recommended to fans of the genre. Seek it out.

Blood on Her Name is released by Vertical Entertainment and is available now via various streaming platforms.