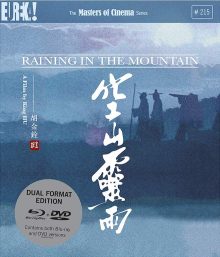 King Hu is a director whose career peaked quite early, commercially speaking. After joining the Shaw Brothers Studio as a set decorator, actor, scriptwriter and assistant director, he eventually moved into directing and after only two years found great success with his fourth film, the martial arts classic, Come Drink With Me. He left Shaw Brothers following this and headed to Taiwan where he managed to top his previous effort, breaking box office records with Dragon Inn. Both films were hugely influential too, helping shape martial arts cinema for decades to come.

However, Hu’s next project (after making a segment of the anthology film Four Moods) ran into trouble. A Touch of Zen was a much more ambitious film, running close to three and a half hours, and took a long time to produce due to Hu’s meticulous eye for detail. During the long wait before its release, however, tastes changed in East Asian cinema. Thanks to the emergence of Bruce Lee, the public were now looking for more modern kung-fu movies with hard-hitting realistic violence, not the acrobatic fantastical period pieces Hu was making. So A Touch of Zen flopped. It did find critical success overseas when it was screened four years later in Cannes and won the Grand Prix, but it was too little too late for the Hong Kong studios.

Hu, therefore decided to go independent and started his own production company to finance a pair of films, The Fate of Lee Khan and The Valiant Ones, which he made back to back, sharing sets and cast members. These were still out of step with audience tastes, but perhaps because the settings and styles were a fitting outlet for Hu’s creative interests and strengths, he persisted in making another back-to-back pair of period wuxia films, Legend of the Mountain and Raining in the Mountain. These, of course, still failed to make much money and, disheartened and struggling to raise finances for his personal projects anymore, his work rate slowed down considerably and the quality of his later films never quite reached the heights of those he made between 1966 and 1979.

These films still exist though and have gained considerable critical acclaim over the years. I’ve been gradually working my way through them and have enjoyed every one, so it didn’t take much thought for me to request a copy of Eureka’s forthcoming Raining in the Mountain on Blu-ray to review.

The film is set in a secluded monastery during the Ming Dynasty (Hu’s favourite period). The abbot is reaching the end of his days so must choose an heir to succeed him. To aid this choice, he invites three important laymen to stay at the monastery for a short while to advise him. These include Esquire Wen (Sun Yueh), General Wang (Tien Feng) and Master Wu Wai (Wu Chia-hsiang). The latter is the abbot’s most trusted advisor, as he is an enlightened Lay Buddhist. The other two, however, have their eyes on a priceless sutra housed in the monastery. Wen has brought two expert thieves with him, White Fox (Hsu Feng) and Gold Lock (Ng Ming-Choim, one of the lesser-known 7 Little Fortunes), who plan to steal the sutra. Wang and his right-hand man Chang Cheng (Chen Hui-Lou) are suspicious of them and have their own devious plans to get the scroll.

Meanwhile, three monks vie for the title of abbot. One, Hui Wen (Lu Chan), has a sharp mind and plots with Wen in return for a recommendation, whilst another, Hui Tung (Shih Jun), is also devious and corrupt and teams up with Wang. The third monk, Hui Ssu (Paul Chun Pui), is more straight-laced and seems the main contender for the abbot position.

However, a fourth monk enters the scene and causes all manner of problems among the devious groups of laymen and potential abbots. Chiu Ming (Tung Lin) has been convicted of theft and sentenced to military service but chose to repent and serve his time as a Buddhist monk. It seems he was wrongly convicted though, with Cheng behind the deception. Truly embracing his Buddhist faith, Ming harbours no grudge against Cheng. This, and other signs of abstinence, faith and devotion, show Ming to be the most enlightened Buddhist of all.

There’s a fairly large cast of characters then, but the story isn’t overly complicated, keeping its theme focussed on not necessarily Buddhism, but in how human vices, particularly a lust for power, could get in the way of Buddhist practises. Hu was interested in this contradiction and there are some well-constructed scenes that examine it, such as when Wai’s handmaidens are bathing next to studying monks who are either clearly troubled by their presence or sneaking a few peaks in their direction.

The film isn’t a dull study of religious adherence though. The central plot is filled with enough intrigue and treachery to keep you gripped and Hu injects the film with excitement in a handful of impressive set pieces. There aren’t many straight-up fights here, other than in the action-packed finale, but Hu makes the most of the thieves sneaking around, drawing out these tense scenes and filling them with swift and graceful movements. Influenced by Peking opera, the director has always been a master of crafting balletic motion.

Speaking of movement, Hu also likes to throw in plenty of dolly shots. Like all of his films, the cinematography is artful and carefully composed, yet rarely static. He makes wonderful use of locations too, with the monastery (actually in Korea) providing strong visual framing devices and glorious colour and detail to counter the drably dressed monks. Wai and his handmaidens are also colourfully dressed to add life to the palette.

Hu once again then proves his mastery of the medium, with a gripping yet often spiritual drama with flashes of action and intrigue. His assured direction and strong storytelling make for a near-flawless experience. So Raining in the Mountain comes highly recommended, as do all of Hu’s films made during his most fruitful period.

Raining in the Mountain is out on 24th February on dual format Blu-Ray and DVD in the UK, released by Eureka as part of their Masters of Cinema series. Unfortunately, a complete negative of the film couldn’t be found, so the remastered print is made up from several sources. This means the transfer is rather hit and miss. It’s generally sharp and detailed, but there’s quite a bit of colour fluctuation and a few sequences are badly washed out. The best seems to have been done from poor source material though and it’s perfectly watchable, but don’t expect it to look as amazing as some Blu-rays that have been sourced from an original negative.

Rayns’ commentary is excellent as usual. His knowledge of Asian cinema is unsurpassed and he knew Hu back in the day, so has first-hand accounts to impart.

Cairns’ essay, which is thoroughly researched and informative, is like a shortened commentary, running through a largely chronological series of clips with narration over the top. There are visual comparisons with Legend of the Mountain at the start though.

As per usual, the booklet is a great source of in-depth writing on the film and is as vital as any of the video featurettes.