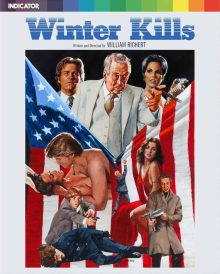 The assassination of John F. Kennedy in 1963, on top of being an immensely shocking and tragic event in American history, was one of the first incidents to truly popularise the conspiracy theory. Soon after the assassination, people were asking questions and speculations about a higher order being involved were being concocted. So President Lyndon B. Johnson launched the Warren Commission to try and put a cap on any more wild-eyed theories. When the commission was finally completed though and concluded that Lee Harvey Oswald killed JFK, acting alone, and that Jack Ruby killed Oswald, again acting alone, it did nothing to silence the conspiracy theorists. They found the whole thing unsatisfactory. Since then, countless theories about the incident have been cooked up and these not only helped inspire films about them, but launched a whole wave of conspiracy thrillers (though these became more prevalent in the 70s after Watergate provided further inspiration).

One conspiracy thriller coming at the end of the 70s but looking back at the JFK assassination (albeit in a thinly veiled form) was Winter Kills. Based on a book by Richard Condon (The Manchurian Candidate), it had a deeply troubled production. The original producers, Robert Sterling and Leonard Goldberg, were drug dealers and the shoot was held up three times due to the money running out. After the third time, the cast and crew had pretty much given up hope that the film would be finished. This was further cemented when Goldberg was found tied to a bed with two bullets in his head and later Sterling was sent to prison for 40 years for smuggling marijuana.

However, director William Richert and star Jeff Bridges came up with an idea to resurrect Winter Kills. They went to Germany to make a quick and marketable comedy called The American Success Company and made enough money through distribution rights to fund the final few shooting days of Winter Kills. It was eventually finished two years after the initial start of production, but unfortunately was held back from a US release for another couple of years and failed to find an audience, despite finding critical success on its premiere at the Venice Film Festival. Over the years it’s become a minor cult favourite among conspiracy thriller buffs though and Indicator are giving it a fine Blu-ray release here in the UK.

Winter Kills sees Bridges play Nick Kegan, the brother of former US President Timothy Kegan who was assassinated 19 years previously, in 1960. Like the JFK case it’s clearly modelled on, the incident reportedly involved a lone gunman, Willie Arnold, acting alone, who was soon after murdered by another lone gunman, Joe Diamond (Eli Wallach in flashbacks). However, at the start of the film, an associate (Richard Boone) of Nick’s arrives with a bandaged up man, Arthur Fletcher, who claims in his dying moments that he killed Timothy and discloses where his rifle can be found. This kickstarts a complicated wild goose chase as Nick endeavours to get to the bottom of who killed his brother. He’s supported by his father “Pa” Kegan (John Huston) who has great wealth and power but doesn’t always see eye to eye with his remaining, and less-ambitious, son.

Winter Kills gives an unusual spin to the conspiracy thriller in that it takes a largely comic tone yet tries to maintain the classic aura of paranoia and intrigue. Only the tone isn’t entirely consistent or effective. Its humour has an oddball charm, but is rarely laugh-out-loud funny, so the film isn’t a riotous comedy, and the story is a little too ridiculous at times and hard-to-follow to work effectively as an out-and-out thriller.

For me, one of the biggest issues though is the general flow of the story. Too often Nick is sent in a tangential direction merely due to a line of dialogue. He rarely does any detective work of his own and there are so many lies told to him it’s hard to know what was true once it’s finished. This is clearly the point, as this method of confusion is alluded to in the script. However, it makes for an episodic, muddy and repetitive narrative. There are some interesting elements thrown in here and there, but they’re rarely fleshed out, such as Anthony Perkins as the all-knowing John Cerruti who runs an advanced surveillance network for Pa. He’s mentioned in places throughout the film but only really comes into play during the final act. Speaking of which, the final revelation (though diluted with extraneous details) is rather predictable.

The film is not without its charms though. Even if the tone is a little unsure of itself, it’s nonetheless admirably unique. The cast is amazing too, featuring a veritable who’s who of big stars and beloved character actors. Most only crop up for a few minutes but it’s fun to spot them and largely they deliver decent performances.

The cinematography, from the great Vilmos Zsigmond (The Deer Hunter, Close Encounters etc.) is very good too, with particularly effective use of locations. Maurice Jarre provides a powerful score too. Quite how the then-rookie director Richert roped all this talent into his debut feature, I’ll never know. He must have been quite the talker, though the source novel would have helped sell the film.

Altogether then, its unusual tone, vein of offbeat humour and flashes of fine craft kept me engaged, but overall Winter Kills felt overstuffed and the story too clunkily told to truly win me over. So it comes across like a curiosity rather than a hidden gem once you boil it all down.

Winter Kills is out on 27th January by Powerhouse Films on Blu-Ray as part of their Indicator label in the UK. The picture * and audio quality are both superb, as has become expected from Indicator. The only exception is a single shot at the end of the reissued cut, which could only be found on what looks like VHS. An opening caption explains its inclusion.

Once again, Indicator have pulled out all the stops and made an exceptional package for an otherwise forgotten film. Richert appears in most of the features and he’s an excitable man with plenty of anecdotes to tell. Due to this, there’s a little crossover between extras, but everything is worth watching. Richert’s commentary is the most extensive feature of course, but the ‘Who Killed ‘Winter Kills’’ piece is a more refined coverall. Glenn Kenny’s featurette is excellent too, giving an interesting overview of conspiracy thrillers, particularly those linked with the Kennedy Assassination.

I haven’t been sent a copy of the booklet to read, but they tend to be indispensable parts of any set Indicator releases.