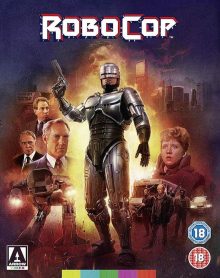 In the context of Martin Scorsese’s recent comments about comic book movies, Robocop is like a glimpse at another, alternative dimension. For Scorsese, today’s comic book movies suffer because their first priorities are demographic breadth and the continuation of the wider franchise. Niceties such as individual films’ artistic voice and narrative are distinctly secondary. It would be hard to level these criticisms at Robocop.

While not based on a specific property, Robocop’s creators acknowledge that comics (especially 2000 AD) were a major influence at every stage of the film’s creation. Like recent Marvel entries, it presents an all but unstoppable superhero and explosive action. But it also takes trends from comics that Marvel’s Cinematic Universe has carefully shunned. As directed by Paul Verhoeven, Robocop presents a deeply critical, satirical view of contemporary America: a corrupt, desperate society that is utterly dominated by powerful corporations. It makes unusual, but compelling narrative choices. And it is wildly, stomach-churningly violent in ways that pushed hard at the very upper limit of the R rating at the time of its release.

The tone is set by an opening news bulletin. Cheery, big-haired anchors announce that, with Detroit on the verge of bankruptcy, a company named Omni Consumer Products (OCP) has taken over running the police department. OCP executives see two benefits: in return for footing the policing bill they will be allowed to redevelop large areas of the city, and Detroit’s crime-ridden streets are the perfect location to test out experimental military hardware. Their big new product is a menacing, walking tank code-named ED-209. But when ED malfunctions and mini-guns an executive to sheds, an up and coming suit named Bob Morton (played with sleazy glee by Miguel Ferrer) see a chance to further his own, rival project. Morton wants to mechanically augment human officers. He’s waiting for a suitable ‘volunteer’, but that shouldn’t take long. As he tells his boss, “We’ve restructured the department and placed prime candidates according to risk factor.” 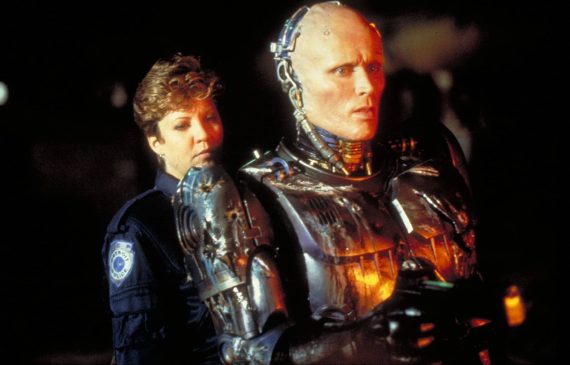 It’s a brilliant line, hiding a horrible truth in management speak. What Morton is actually saying is that he has arranged for Detroit’s best police officers to be placed in locations where they are most likely to be fatally wounded. One of those poor officers is Alex Murphy, played by Peter Weller. Typical of the film’s lean, focused approach to story-telling, we’ve barely met Murphy and his new partner Lewis (Karen Allen) before he’s gunned to pieces by a gang, led by master criminal Clarence Boddicker (Kurtwood Smith). His body is carted away by OCP and made into Robocop. As part of the process Murphy’s memory is supposedly wiped. Yet flashes of his previous life (and death) linger, and these lead him to attempt to uphold the law in ways OCP never intended.

Robocop is one of those films where everyone involved excelled themselves. The script is smarter and funnier than it needs to be. The design and special effects are innovative and memorable. As Murphy/Robocop, Weller spends most of the film hidden behind a mask in an incredibly restrictive costume. You might think this would limit his contribution, but instead he threw himself into his physical performance, developing a style of exaggerated, deliberate movement that is instantly recognisable to this day. Most of all, Verhoeven pushes the envelope wherever possible, encouraging big, cartoonish portrayals from his villains, and gory, spurting wounds from his effects team. In a world where corporate greed and violent crime are presented as two sides of the same coin, Verhoeven enthusiastically presents the worst excesses of both. It created a personal style that would serve him well for the rest of his American career. Surely Scorsese would approve. 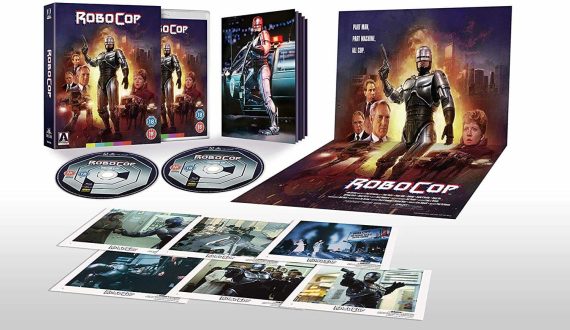 Since the days of Criterion Laserdisc, Robocop has had plenty of attention in home formats, so do we really need another special edition? Arrow clearly thought so, as they’ve put a lot of work into this new two-disc Blu-ray, and it turns out they were right. Both the standard of the feature presentation and the accompanying supplements are far superior to any of their predecessors.

First of all, there are three versions of the film: Verhoeven’s preferred director’s cut is on the first disc, with around 2 minutes of additional impact wounds that he couldn’t get past the ratings board. It’s a director-approved 4K rescan of the original negative. On the second disc you get the theatrical cut and a television edit, although the latter is only in SD. The differences are fascinating. Assumably, the MPAA insisted on the removal of gore to ‘protect’ audiences, and yet Verhoeven’s focus on the physical consequences of violence is intentionally sickening; by trimming these consequences, the theatrical cut actually seems to glamorize the villains. By also removing nudity, and dancing around even the mildest swearing, the TV cut is often amusing, as well as nostalgic for those viewers who first encountered the film in that form, and had to guess at what was obviously missing.

The special features are an impressive mix of old and new content. The director’s cut has three commentaries: an old one with Paul Verhoeven, executive producer Jon Davison and co-writer Ed Neumeier, and two new ones, from former Orion Executive and film scholar Paul M. Sammon, and fans Christopher Griffiths, Gary Smart and Eastwood Allen. If you’ve not already heard it, the filmmaker commentary is the one to start with – the trio are friendly and engaged mix production stories with their views on the finished film. The same is true of the other two tracks, but given the wealth of coverage Robocop has already received, they really have to work hard to offer new information, and occasionally lapse into obscurity. If you want to know absolutely everything about Robocop, they’re still worth a listen. 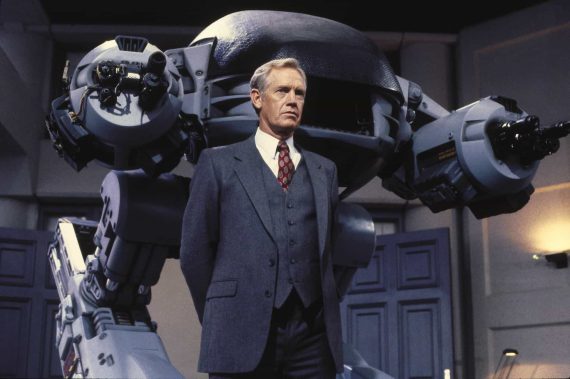 Moving on to video content, Arrow have done an exceptional job of rounding up production personnel for new on-camera interviews. There are separate featurettes for each of the writers, Nancy Allen, casting director Julie Selzer, second unit director Mark Goldblatt, special effects creators Peter Kuran and Kevin Kutchaver and composer Basil Paledouris. These last between 8 and 32 minutes, and all are of a very high quality. It quickly becomes apparent that, while Robocop was not an easy production, they all knew they were working on something innovative and special.

That sense of camaraderie is confirmed by an onstage ‘Filmmaker Q&A’ from 2012. Running 42 minutes and featuring all the key players including Verhoeven, Davison and Weller, it’s a fun, light-hearted chat, with Weller in particular rolling out some good anecdotes. The Q&A has features on other Robocop editions, as have the remaining extras on disc one: a trio of slick ‘making of’ featurettes, 3 minutes of deleted scenes, 6 minutes of storyboards, 11 minutes of ‘production footage’, trailers, TV spots and image galleries.

On the second disc, the theatrical cut also has the option of listening to the filmmaker commentary, and there’s a great selection of extras focusing on the differences between the cuts. Although the TV cut in its entirety is only in SD, the footage that exclusively appears in that cut (shot to make such a cut comprehensible) is also included in HD. There are also split scene comparisons between the different cuts.