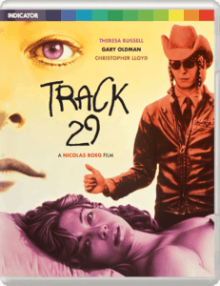 When a young hitchhiker named Martin (Gary Oldman) wanders into the life of utterly unhappy housewife Linda (Theresa Russell) to her model train loving and cheating husband Henry (Christopher Lloyd), Linda has to cope with the possibility that she has been reconnected with the son that was taken from her when she was 16. Martin presents himself not only as her possible long lost son, but also as a potential new lover, but not all is what it seems.

Adapted from writer Dennis Potters own well-received 1974 BBC play Schmoedipus, Track 29 was able to attract a lot of calibre in the form of Director Nicolas Roeg (Performance and The Man Who Fell to Earth) and Gary Oldman who was coming off Sid & Nancy and Prick Up Your Ears. Track 29 had all the hallmarks to be a classic 80’s film, but it falls to the wayside due to a number of missteps.

The positives of Track 29 are of course the performances from our 2 leads, both Russell and Oldman try to command their scenes with Oldman perhaps doing so the most due to Russell’s poor North Carolinian accent. Oldmans is a live wire throughout and was obviously told to let loose and have fun. No more is this evident than in his opening scenes as he travels to the small town where his “mother” lives. We see the early beginnings of the performances that Oldman would later produce in the ’90s when he is given even more leeway towards his character and it is a joy to watch.

Russell is given the impossible challenge of trying to be a sympathetic character for the audience, but also someone who is completely losing her grip with reality. From the start, we know she is unhappy with the routine life she now lives in due to her interactions with her husband and her reliance on prescribing herself with alcohol for breakfast. But, upon her chance meeting with Martin, her grip on reality snaps beyond repair. As the film continues and we see just how far gone Linda is, we start to lose that sympathy that was strongly there at the start of the film. This is a woman haunted by a past trauma who has never really recovered from it (her bedroom filled with dolls gives that away clearly), who is now in a marriage that is dead in the water and that PTSD has finally broken through. We should be so invested in this character and Russell tries everything to make us, but the story isn’t going that way and it should have.

Interestingly the decision not to make Christopher Lloyds, Henry Henry (yes really) the straight man of the piece is a tad strange. As an audience we are now made to decide who we should side with and instead of Henry just having the quirk of his obsession with model trains, we find that he is cheating with his colleague and his interactions with his boss is downright bizarre. This, of course, is not even mentioning the model train convention scene later in the film, which really needs to be seen than described as I simply would not do it justice. 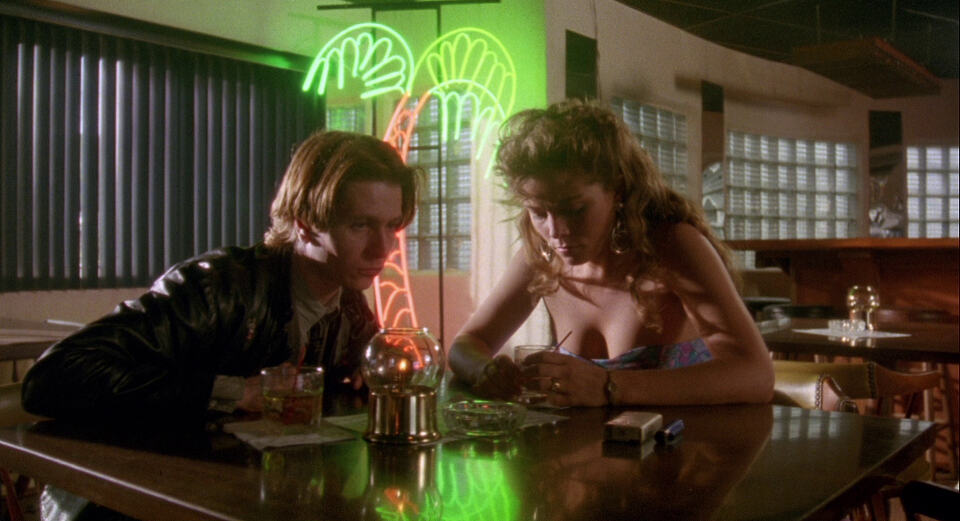 There are issues with Track 29 and they are plentiful, Potter has kept a lot of the script to his hour-long play and instead of keeping the twists to later on in the film. They are revealed far too quickly and although that leaves an interesting position for the audience to see what exactly Linda does for the next half of the film. Will she try and get help or will she give in and let the obvious PTSD of having her child taken away from her take control? The extra time the film had from the play, should have given us the chance to look more into Linda and her emotions, instead, it feels as if we are being hurried along to view the madness and boy is their tonnes of weirdness.

As with some of Roeg’s work Track 29 has the tendency to lean a little too heavy on the surrealism and it does cost the film at times, no more so during the final scenes. We are presented with so many different scenarios in the finale of each character that instead of being left on the edge of your seat wondering about the possibilities, we are instead left frustrated. Whose blood is seeping through the floor into the living room? Is Henry actually calling for Linda? Is Linda really leaving? I could go on with the scenarios and that is what is frustrating as a viewer. Maybe that was the point but to be continually frustrated by the choices of the director can become tiresome. A great film lives underneath Track 29, but the impression left with us is that Roeg wanted to leave his traditional mark on it and it almost proves costly.

In the end, the film leaves the audience asking more questions than it can even start to answer and it loses all the steam going for it far too early. A puzzle that was left never to be solved. The performances are wonderful with Russell and Oldman the clear highlights who make Track 29 worth the price alone.

On the Right Track (2019, 10 mins): editor and long-time Roeg collaborator Tony Lawson discusses the construction of the film

Buzz and Gossip (2019, 15 mins): sound mixer David Stephenson reflects on the challenges of making the film

With Indicator, we know that they won’t just release a new Blu Ray without filling it with a vast amount of goodies. So while the film is worth the price, the extras make it a must. Of course, the high definition remastering is of top quality

Within the features are four great short pieces about the production and post-production processes that it took to create the film. Learning how Roeg works and wanted Track 29 to look from an editing standpoint was interesting, especially because he has worked with Tony Lawson for quite some time and if you have any experience of a Roeg film you will learn that you need to know as much as possible about his editing decisions as you can! There is an isolated music and effects track that is interesting, but pretty sparse due to the film being dialogue heavy.

The costuming and sound mixing featurette provided interesting insights into the film due to the film being on a small scale especially as these sort of featurette are reserved for the bigger budget film. But we all know that the reason these exist is that people wanted to know what it was like to work with Roeg. As you can tell he dominates the extras on this film and rightfully so.

The best is without a doubt the NFT interview with Nicolas Roeg which is a great listen regarding his career. It should be remembered that it wasn’t always plain sailing for Roeg as he flitted between film and TV. Not too far behind that, is the audio commentary by Jim Hemphill who is able to guide us through certain aspects of the Roeg’s approaches to films as well as the obvious changes that Roeg made to the original script. All of it fascinating to keep any cinephile entertained.