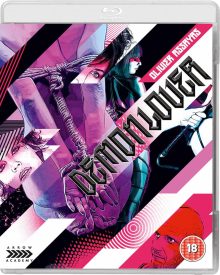 Demonlover is very much a tale of two halves. The first is a slow and methodical corporate espionage film with little hints of eroticism and intrigue. This half, well 80 or so minutes has lots of drama with the viewer unsure on who will come out on top. It is an exciting and intriguing look into the corporate world and I think if it was released in any other era it would have ended there and some extra work would have been put in to make that an excellent film in its own right. But, we have another 30 minutes to go and this latter half of the film takes a dramatic left turn and instead of the entrancing battle for corporate superiority we are thrown into a world of illegal activity on the dark web. Throughout the film, we are given little notes and details about “The Hell Fire Club” without ever fully seeing what goes on inside it. The film could have kept it this way and been perfectly fine, knowing that there is something very illegal going on with this company that multiple people are trying to purchase brings questions of morality into play. Do you still go forward with trying to win when you know there is something deeply troubling with part of the company you have been tasked with obtaining?

Instead, we are thrown into a world of a Lynchian and Cronenbergian nature that doesn’t truly fit the whole scope of the film. Of course, there will be people who absolutely adore the last portion of the film and how Diane goes too far down the rabbit hole. It is what gave the film its cult status after all. Would it be remembered for what came before it if it didn’t have this third act (I am more inclined to call it a long epilogue)? This portion of the film really needed to have come in sooner or at least more hints would have been welcomed as when the horse bolts as the storyline does here, it became very hard for the door to be closed again in a cohesive way. In the end, sadly we are given a film that is as ambitious as it is muddled.

A variety of reviews mention how dated the technology looks, and mention it in a negative way. This cannot be helped and if anything shows that the while the way we are able to view things on the internet, the dark corridors of it are still very much the same and may never change. That is an interesting topic to think about really. Demonlover is 17 years old and the dark nature of what we can see on the internet has not changed one iota, if anything, websites like The Hell Fire Club are even more prevalent in our society.

With films such as this, it is important to have some sort of feeling and hope towards one of the main characters, but as the story goes on, fewer and fewer of our cast become likeable and that is perhaps the point. Should we like corporate executives who are only out to undercut and stab each other in the back and do they deserve the misery that befalls them? Are we as bad as the executives for wanting the worst to happen to them in their lives due to our own cynicism to big corporations? Clearly, Assayas believes that answer to be a very firm yes and then some and only once we realise his intent do we become okay with it. Morality is thrown out the door and we are just cold observers much like those who watch the goings on in The Hell Fire Club.

There few films where the special features make the Blu-Ray a definite purchase, but with Demonlover that is very much the case. Where the film falters the features excel. The archive interviews are of real interest as while everyone is polite Sevigny does show her frustration with the production and primarily Assayas. Why they kept in I am not sure, but it is refreshing to see that not all productions are smooth sailing for all involved.

Fans of Sonic Youth will undoubtedly enjoy their documentary on the making of the score, happily, there is more than plenty for those who just appreciate interesting scores. It is always enjoyable to delve into the works of musicians who are not known or used to make a film score.

Assayas commentary is non-stop which is most welcome as some commentaries veer towards only having someone talk at certain points throughout the film. Assayas does speak in French throughout the commentary so make sure that you have the subtitles on if you are not a French speaker. He also provides a wealth of information about the film that makes for a pretty full commentary track.

While Jonathan Romney’s visual essay broaches some of the topics that Assayas rapidly mentions in his commentary they are interesting as the essay is able to spend a bit more time on each topic and it gives a fuller scope of the production and the meanings of certain scenes.

The same is said for the Q & A and an hour-long documentary, where Assayas spewed his thoughts and notes in the commentary with breakneck speed, here he is able to elongate his intentions and memories and boy does he have a lot of them about this film. Happily, this is said in a positive way. All film fans love to learn about the film and films such as Demonlover which did gain such cult traction deserve such a comprehensive look.

As mentioned, the extras on this Blu-Ray make its purchase an absolute must.