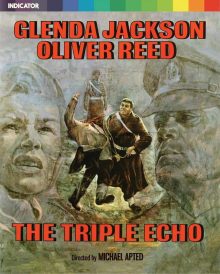 Michael Apted is a British director who has a lengthy and incredibly eclectic filmography. He began working in TV and although he later moved into filmmaking he’s always hopped between cinematic releases and television films, series and documentaries. In fact, although he’s made a lot of feature films and found acclaim with some, such as The Coal Miner’s Daughter, his most respected work is probably the ambitious Up Series of TV documentaries (the next instalment of which is due this year). He’s made a couple of big-budget blockbusters, including a Bond film (The World is Not Enough), and quite a few earnest dramas based on true stories (e.g. Gorillas in the Mist Amazing Grace), but he began his cinematic career with The Triple Echo, an unusual film that began life as a star vehicle for Glenda Jackson and Oliver Reed, who had found great success working together on Women in Love three years prior. It’s a film that has been largely forgotten, but it’s being released on Blu-Ray by the Indicator label, whose marketing boasts it has been overlooked and “is one of the finest British films of the 1970s”. I figured I’d test this claim and gave the film a whirl.

Set in England during WWII, The Triple Echo sees the young soldier Barton (Brian Deacon) wander onto the land of Alice (Glenda Jackson), who’s running a farm by herself after her husband went to war and was taken prisoner by the Japanese. Barton starts to visit regularly and the two fall in love. After spending an extended leave there, he decides not to go back to the army. Alice talks him into hiding by dressing as a woman and pretending to be her sister. He reluctantly agrees but soon grows fed-up with having to stay stuck at home all the time. One day an army sergeant (Oliver Reed) shows up and takes a liking to Barton in his female guise, so continues to appear at the farm unannounced, hell-bent on getting Barton to come to a dance back in town. Quite enjoying his seemingly effective act by this point, Barton continues to string the sergeant along, moving ever closer to an inevitably dangerous end to his game. 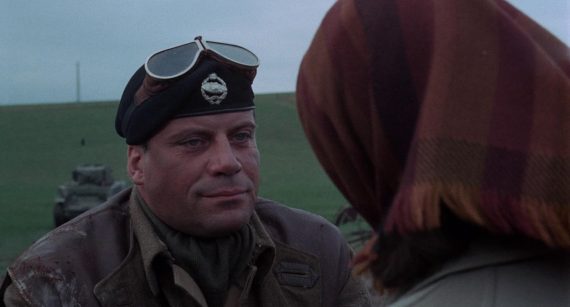 The Triple Echo, as I briefly described in my introduction, is quite a unique and odd little film. I say ‘little’ because it’s quite slight in terms of plot. There isn’t much more that happens beyond what I’ve described above. That’s not to call it dull, but it’s a gently unfolding drama that’s concerned more with its characters and ideas than a gripping narrative. Due to this, the film relies heavily on its performances and luckily it has some great ones to lean on. Glenda Jackson is superb, showing why she was one of the most respected British actresses of her generation. Reed is perfectly cast as the brutish sergeant who won’t take no for an answer. He’s a force to be reckoned with when his character enters a scene, although the equally powerful Jackson gives him a run for his money. Deacon has the weaker character and his whining can be a bit irritating at times, but he’s also well cast in his role, pulling off the effeminate look effectively enough to carry out the film’s tricky concept.

What intrigued me most about the film though was how it worked as a study of gender. Whereas some dramas would examine traditional gender roles such as the ‘downtrodden wife’ or ‘abusive husband’, this turns ideas like this upside down. Alice is the tough head of her household, who gets things done without fuss. Barton is fairly timid and cowardly, and begins to get into the superficial upkeep of being a woman as he grows into the role. The sergeant is your typical aggressive male figure, but having him fall for the ‘charms’ of a cross-dressing man, the stereotype is yet again subverted. Twists on gender roles like this are hardly revelatory, but the film uses them very effectively to help the audience reflect on the ideas. Most notably, having Barton grow weary of his new ‘housewife’ existence helps men think twice about what many are expecting from their spouse. It also acts as an intriguing comment on the role reversals of women during the war. 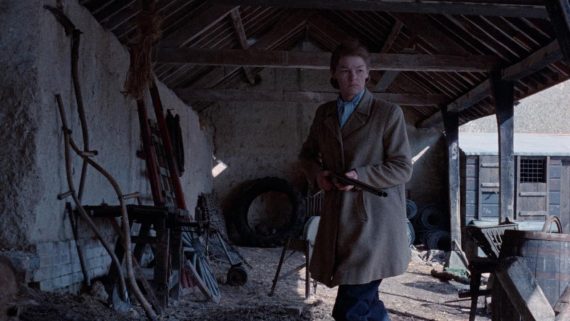 Apted’s direction isn’t particularly flashy, but there is a great use of locations. On top of pretty shots of the landscape, he has his camera roam through and in and out of the farmhouse, adding to the authenticity and naturalism of the film. The final act is suitably tense too, contrasting the gentle opening and emphasising the potentially suicidal nature of Barton’s games.

Overall then, it’s an odd little film that perhaps seems a bit too slight to rave about, but does offer an unusual way of capturing what life was like for women in the ‘good old days’. Handsomely mounted with strong performances, it’s solidly made too. I’m not sure I’d go quite as far as to say it’s one of the best British films of the 1970s, but it’s certainly worthy of more attention than it has received over the years. 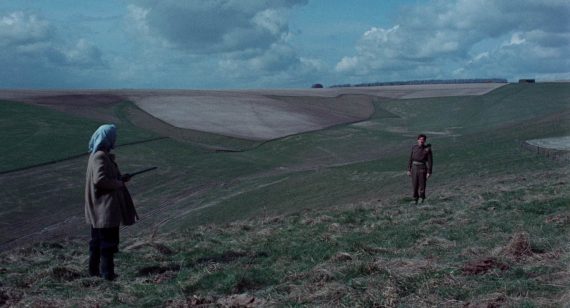 The Triple Echo is out on 25th March by Powerhouse Films on Blu-Ray as part of their Indicator label in the UK. The picture and audio quality are both fantastic.
There are plenty of special features included:
- New 2K restoration by Powerhouse Films from the original negative
– Original mono audio
– A Matter of Life and Death (2019, 15 mins): director Michael Apted reflects on his feature debut and its place within his prolific career
– Identity Crises (2019, 29 mins): actor Brian Deacon recalls his first film role starring alongside Glenda Jackson and Oliver Reed
– A Different Perspective (2019, 25 mins): editor Barrie Vince recalls shaping and structuring the film
– Dressing Up (2019, 9 mins): costume designer Emma Porteous on the challenges of recreating an authentic wardrobe for The Triple Echo
– The Emotion of the Moment (2019, 8 mins): composer Marc Wilkinson discusses highlights from his score
– A Sense of Justice (2019, 23 mins): an in-depth appreciation by author and film historian Neil Sinyard
– Super 8 version: original cut-down home-cinema presentation
– Original theatrical trailer, edited by the legendary Jean Fouchet
– Teaser trailer
– Image gallery: on-set and promotional photography
– New and improved English subtitles for the deaf and hard-of-hearing
– Limited edition exclusive 36-page booklet with a new essay by Pasquale Iannone, an archival interview with Michael Apted, H E Bates on The Triple Echo, an overview of contemporary critical responses, an analysis of Jean Fouchet s theatrical trailer, and film credits
– World premiere on Blu-ray
– Limited Edition of 3,000 copies

The interviews are strong and varied, with some enjoyable and honest anecdotes mixed with illuminating facts about the shoot. Neil Sinyard’s appreciation is food for thought as always. Pieces by historians/critics like him are always useful for me when constructing a review. Unfortunately I didn’t receive a copy of the booklet, but these are generally excellent.