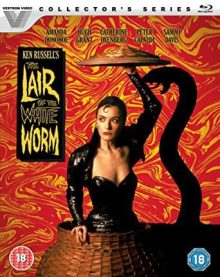 Ken Russell was bonkers. I have no medical evidence of this, but there is the extensive catalogue of his films to back me up. They most certainly are an acquired taste – many people mind his films offensive or excessive, but I love (most) of them. Russell was a visionary with a great intellect and a wicked sense of humour and produced some great pieces of work such as The Devils, Tommy, Altered States and Crimes of Passion. It was the latter which proved too much for Hollywood, so during the second half of the 80s, Russell found himself back in the UK working with various independent companies, with whom he made four films – 1986’s Gothic, Salome’s Last Dance (1988), The Rainbow (1989) and also in 1988, Lair of the White Worm. Unavailable in the UK on DVD, Lair of the White Worm finally makes its debut on Blu-ray.

Very loosely adapted from Bram Stoker’s final novel, the plot finds an archaeologist, Angus Flint (played by Peter Capaldi) digging in land owned by Lord James d’Ampton (Hugh Grant). Local legend tells that Lord d’Ampton’s ancestor killed a giant snake-like monster centuries ago. Angus is staying in a boarding house ran by the Trent sisters, whose parents disappeared under mysterious circumstances a year earlier. When Angus digs up a large snake skull they start investigating the origins of it, and soon discover that it could be skull of the ancient monster known as the d’Ampton Worm. Soon, Lady Sylvia, an immortal priestess of a snake worshipping cult steals the skull and plans to commit human sacrifices to the worm. 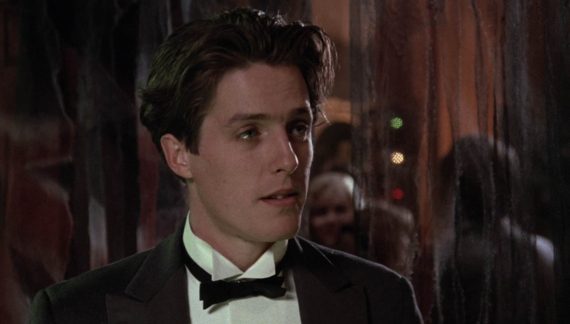 Like The Devils, Russell once again explores the oppressive regime of Christianity and its attempts to stamp out indigenous religions. Lair of the White Worm refers to the common practice by the Christian Roman Empire of building monasteries or convents on pagan worship sites. When Eve Trent (Catherine Oxenberg) discovers a crucifix that has been covered in venom, she has a hallucination of Roman centurions raping nuns whilst Christ on the cross is embraced by the titular worm. This becomes all the more surreal as disorientating layers of visuals rapidly fire out of the screen looking like a lysergic episode of 80s TV show Max Headroom.

True to form, Russell hits the viewer with even more bizarre scenes, from nuns impaled on spikes whilst Amanda Donahoe’s Lady Sylvia licks their blood from a spear-like dildo, to a frankly cringe worthy dream sequence involving Hugh Grant. Lord d’Ampton, after falling asleep under a painting of the worm’s slaying, dreams that he enters the cave in the artwork. Inside he finds a private jet, which he boards and is greeted by Sylvia and Eve dressed as air hostesses (if Ann Summers provided their uniforms). Before long both ladies are wrestling in the gangway, stocking tops on show much to the obvious delight of Lord d’Ampton and his biro (watch it – you’ll understand what I mean!).

Capaldi appears to be having fun in his role playing it relatively serious, but with a knowing wink to the camera. Hugh Grant on the other hand, seems to be bemused by it all. The Trent sisters are hopelessly miscast – Sammi Davis gives one of the most stilted performances I’ve seen in quite some time and Catherine Oxenberg, fresh from Dynasty, delivers an awful northern accent that I’m not entirely sure hasn’t been dubbed in post-production. The film belongs to Amanda Donohoe, who vamps her way through it effortlessly, delivering lines that would make Sid James blush. 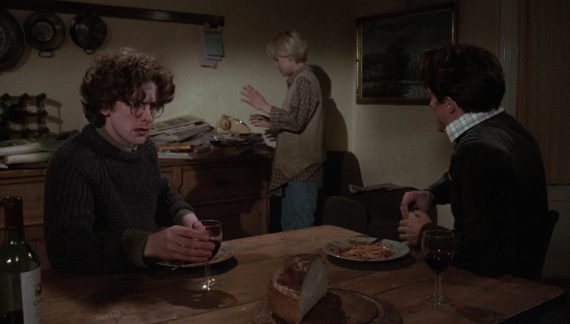 Lair of the White Worm is pure cheesy fun with some horrific set pieces and plenty of gore. Its actors give over top performances and Russell provides plenty of demented visuals that wouldn’t look out of place in an 80s heavy metal video. It won’t be for everyone, but if you go in with an open mind and are not easily shocked, a little kitschy gem awaits you.

Lair of the White Worm is released on Blu-ray by Vestron Video and includes the following special features:

Worm Food: The Effects of The Lair of the White Worm ‐ Special effects artists Geoff Portass, Neil Gorton, and Paul Jones talk about the production including the joy of working with Russell, the on-set chaos, and the various challenges of creating the puppets and other practical effects.

Cutting for Ken ‐ Editor Peter Davies shares the excitement and reality of working with Russell.

Mary, Mary ‐ Sammi Davis recalls the production and how much she loved working with Russell.