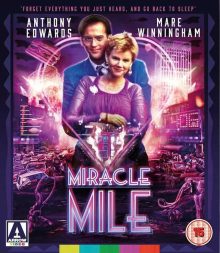 I’ve often talked about how expectations can greatly affect how you enjoy a film. With Miracle Mile I didn’t know a huge amount about it before watching, other than the fact it was about the end of the world. However, I’ve long known about it and been interested in seeing it due to its inclusion in a top 1000 movies guide that came free with Neon magazine (which went out of circulation back in 1999). That guide was split into top 10 lists for specific categories and Miracle Mile was their number one pick for ‘apocalyptic movies’. An image of Anthony Edwards and Mare Winningham sharing an embrace was the image they chose (see below). That guide was a bit of a bible to me as my love of cinema was blossoming at the time, so I’d try to track down anything topping a category. However, Miracle Mile wasn’t a film that showed up in my local video store and it never made it to DVD. That is until Arrow announced they’d be giving it their spit and polish treatment and bringing it out on dual format Blu-Ray and DVD this month. So, being one of the titles from the guide that had ever evaded me, I was eager to review Miracle Mile when it was offered. The listing in Neon’s guide was all I was really going on though and the image they used always made me think the film was a quietly sad and subtle rumination on love and life at the precipice of disaster (that’s what I got from the image at least).

How wrong I was…

Miracle Mile sees museum guide and jazz trombone player Harry (Anthony Edwards) fall in love with the equally quirky Julie (Mare Winningham). They fix a time and place to go on their all-important third date (as Julie puts it beforehand, “I’m going to screw your eyes blue”), but a power cut causes Harry to sleep through his alarm to wake him for their midnight rendezvous. When he wakes in the wee small hours, he desperately tries to get in touch with Julie and ends up answering the phone at the diner where she works, hoping it’s her. It isn’t. The panicked voice at the other end thinks Harry is his father, and tells him that nuclear missiles are on their way to the USA and will flatten the nation in 70 minutes. A violent end to the call suggests this is no prank and as Harry describes what happened to the customers at the diner, a government worker there makes a call that further cements the fact that they should be worried. The people at the diner quickly make plans for escape via helicopter, but Harry won’t leave without Julie. He dashes off on a wild quest to find her and hopefully still make it to the chopper to have some tiny chance of survival. 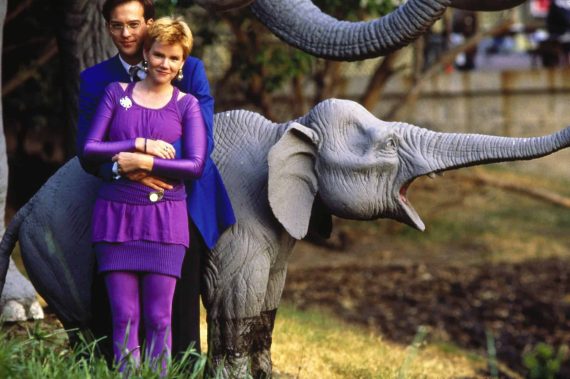 This wasn’t the film I expected, but that’s not a bad thing, as instead of the depressing drama I had psyched myself up for (I find the idea of end of the world utterly terrifying – who doesn’t?!) I was treated to a truly unique blend of black comedy, horror (of sorts) and romance, and I absolutely adored it. There’s a quirky indie movie vibe to everything and the high-concept, everything-goes attitude the 80s were famous for, but at the same time it feels like little else and is all the better for it.

Saying that, I did get a strong Shaun of the Dead sensation as I watched the film, particularly when he ends up going to Julie’s parents apartments to try and find her. The whole ‘trying to patch up a relationship whilst all hell is breaking loose around you’ situation with a comedy/romance/horror spin is very similar to Edgar Wright’s breakthrough film. Whilst that is an enjoyable watch, I must say Miracle Mile provides a more successful take on the idea. I thought the darker sequences, of which there are many, are more powerful here for instance. The finale is particularly strong, with the pandemonium on the streets proving terrifyingly believable and intense, making the most of the film’s meagre budget. The film’s final scene is beautifully pulled off too – unflinching and frightening, but incredibly poignant at the same time. 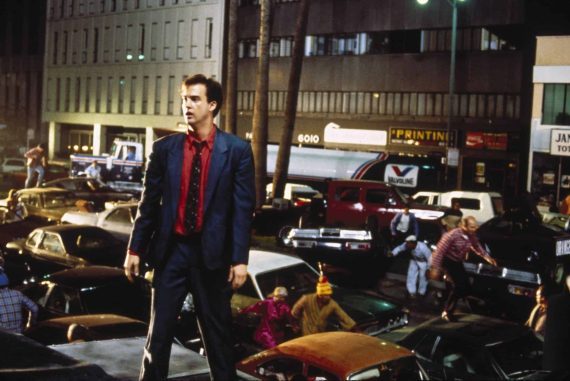 The film is also often very funny, although the jokes are scarcer in the second half. It’s a film that bears repeated viewing to take in all the sharp dialogue and I imagine quite quotable lines. There is a huge cast of memorable and unusual characters too, with a handful of underrated character actors cropping up here and there to offer further treats.

Miracle Mile is truly something special. A bizarre mixture of romance, black comedy and epic scale tragedy, it could have easily gone wrong and I imagine it’s not a film for everyone, but I found the balance of tones perfectly judged to produce something that damns the human race whilst offering a message of hope and displaying touching moments of true love. As such I thought it was a strange kind of masterpiece.

Miracle Mile is out on 16th October on dual format DVD & Blu-Ray in the UK, released by Arrow Video. I watched the DVD version and the transfer was excellent. It’s pretty sharp and clear for a DVD, even when blown up on my projector. The sound comes through nicely too.

This is a fantastic selection of extras. De Jarnatt is an engaging speaker and in his commentaries and interviews he goes into great detail as to the film’s production, long-delayed pre-production and his career before and after Miracle Mile. The reunion featurette is particularly strong too, offering a fun alternative to a typical ‘where are they now’ piece or basic talking heads interviews. There’s a little overlap amongst the various features, but not enough to suggest you shouldn’t watch everything on offer.