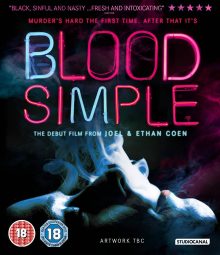 The thing I most love about the Coen brothers is… that they’re capable of anything – including disappointment.

They seem to specialise in the American interior – the woods, the wheat fields, and the miles between settlements.

Against that backdrop they switch (in a heartbeat) from goofiness and gore to existential enquiry, and back again, via the Dude and Marge. (Is there any doubt that the Big Lebowski and Fargo are their finest achievements to date?)

Interesting, then, to trace this 50ft wave of creation back to its source – where we find Blood Simple, as ready to rise and roll as the day it burst its banks.

For a film that owes much to others, it possesses none of the anxieties of influence. If anything, it foretells the white picket fence and the hot stink of tyre in Lynch’s Blue Velvet and Lost Highway, respectively. 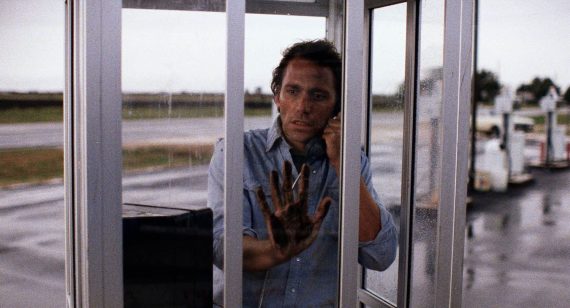 Joel and Ethan’s fingerprints are all over this scene of original sin: the cartoonish plot, the tics and foibles of a bunch of deadly serious – yet cosmically silly – characters, and the witty camera work.

And yet, despite the whiff of bubblegum, Blood Simple haunts as both the ghost of noir past and the noir that’s yet to come – finding its terrible Santa in M. Emmet Walsh’s jovial/sinister cowboy.

We don’t know whether to laugh or cry – or nod.

A fitting start for the all-conquering Romulus and Remus of cinema, whose inland empire has the power to make the whimsical profound, and the profound whimsical.