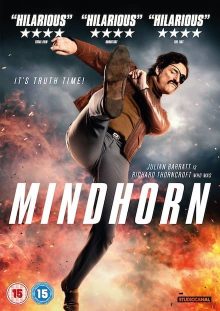 For some reason I don’t watch many new comedies these days (other than animated family films I watch with my kids). I’m not sure why, I love a good comedy. I think it’s because I don’t go out to the cinema as much as I used to, so when I do it’s restricted to big visual spectacles or critically lauded films. The films I choose to review tend to be acclaimed classics or dark and violent cult films too, so my film watching habits of late tend to be rather serious. So, it was a breath of fresh air to be offered a copy of Mindhorn to review. I’m a fan of much of the work of Baby Cow Productions, the company who produced it, and a collection of their regular troop of British comics were involved, including Steve Coogan as well as the writers/stars Julian Barratt and Simon Farnaby. Most of the talent are better known for their TV work, and it can be difficult to make the transition to the big screen, but Coogan and Baby Cow’s recent upgrade of their Alan Partridge character to feature length worked pretty well so I was willing to give this a chance.

Mindhorn sees Barratt play Richard Thorncroft, an actor who found fame playing a detective called Bruce Mindhorn on a cheesy 80s cop show set on the Isle of Man. The film is set in the modern day though, and we learn that Thorncroft blew it all after the show fizzled out, hitting the bottle and badmouthing his colleagues when he believed he’d got a shot in Hollywood. Now he’s doing adverts for compression stockings and girdles, and is deluded in thinking people still recognise him from his heyday. A chance to be back in the public eye appears though when a serial killer who calls himself ‘The Kestrel’ leaves a message for the police saying he’s only willing to deal with detective Bruce Mindhorn. Thorncroft is called up to help deal with the situation and he grabs the opportunity to get his face on TV once again. The case brings him to the Isle of Man though, where the past comes back to haunt him. Most notably his ex-girlfriend Patricia DeVille (Effie Davies) still lives there with her husband, Thorncroft’s former stuntman, Clive Parnevik (Farnaby) and her daughter, who Thorncroft believes is his. Whilst dredging up the past, the murder case takes a few twists and turns, which throws Thorncroft into some real life danger. 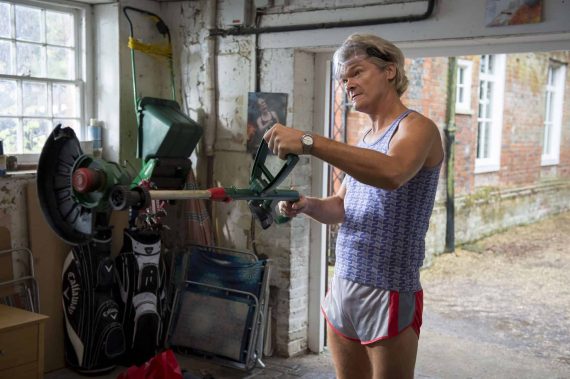 I find it hard to review straight-up comedies, which is possibly another reason why I don’t watch so many these days. The most important thing a comedy needs to do is make you laugh and there’s only so much depth you go into how well this is done when writing a review. Mindhorn did make me laugh, I’m pleased to say, although I wouldn’t say my sides were splitting throughout. It’s enjoyable and fun, but I’d never call it hilarious unfortunately. The central premise of the washed up actor clinging on to his former fame is hardly original, but it’s well-mined and the clips of the original ‘Mindhorn’ show lovingly spoof the likes of ‘Bergerac’ and ‘Lovejoy’, with a sci-fi ‘Six Million Dollar Man’ twist (Mindhorn can literally see lies with his bionic eye). Some of the most successful jokes surround the dated attitudes of Thorncroft and his former agent Geoffrey Moncrieff (Richard McCabe) though. The latter is the only character who’s fallen harder and lower than Thorncroft and provides some of the more uncomfortably funny scenes.

The story lets things down however, proving rather predictable and uninspired, though it keeps things moving and throws up one or two small twists to keep your attention. The central romance between Thorncroft and DeVille is fairly well handled too, if hardly revelatory. Essie Davis helps deliver this by making the most of a character that’s not particularly interesting. The cast in general are decent, with Barratt nailing the lead character and Farnaby relishing the numerous face-offs they have against each other. There are numerous cameos from British comics too, as well as the thespians Kenneth Branagh and Simon Callow, who make memorable appearances. 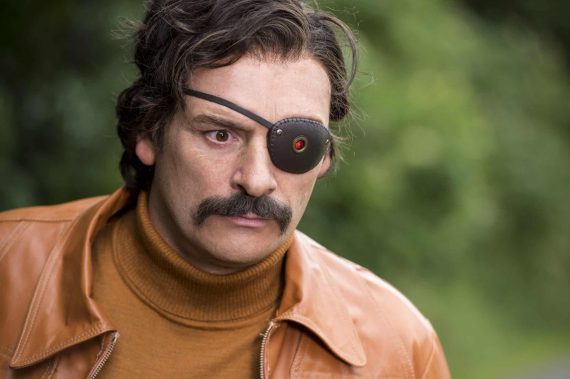 Overall, it’s easy watching and often funny, but is never original or clever enough to be particularly notable. It’s a fun concept and Barratt is very enjoyable in the lead role, but I can’t see this going down as a future comedy classic.

Mindhorn is out now on digital download, Blu-Ray & DVD in the UK, released by Studiocanal. I saw the Blu-Ray version and the film looks and sounds great.

Most of the featurettes are daft promo pieces, which are mildly amusing, but rather throwaway. The commentary is a lot of fun though, with the pair, who are clearly good friends, on top form. They don’t take it particularly seriously, but still include some interesting tidbits about the production.