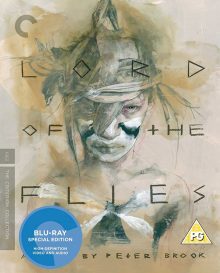 Making a film adaptation of a novel is always a tricky business, as you can fit an awful lot more content into a few hundred pages of text than you can an hour and a half or two hours of film. You’ve also got the weight of expectation coming from fans of the source material. So tackling a novel as hugely successful and highly regarded as William Golding’s Lord of the Flies was always going to be tough. Back in 1961, Peter Brook, who was better known as a theatre director (and still is, for the most part), felt up to the challenge. The resulting film (released in 1963) was critically and commercially pretty successful though and is fondly remembered enough for Criterion to add it to their illustrious collection. I studied the book in high school and I seem to remember liking it. I can still recall chunks of the story around twenty years on, so it must have made an impact at least. So I fancied giving the film a look.

For those that haven’t read the book, Lord of the Flies is set on a remote desert island where a group of British school children have crash landed (evacuated from a war torn home, as is suggested by the montage of sound and still images the film opens with). No adults lived made it, so the boys are forced to survive by themselves. They soon nominate a leader in Ralph (James Aubrey), who tries to maintain order and work towards signalling for help. However, Jack (Tom Chapin), head boy at his school and leader of the choirboys, is jealous of Ralph’s position and has different ideas of what they should do on the island, relishing the hunting of pigs and tribal thrills of island life. This causes a rift that grows deeper as the film goes on and the initial excitement of being deserted on an island paradise turns to fear, violence and ultimately murder. 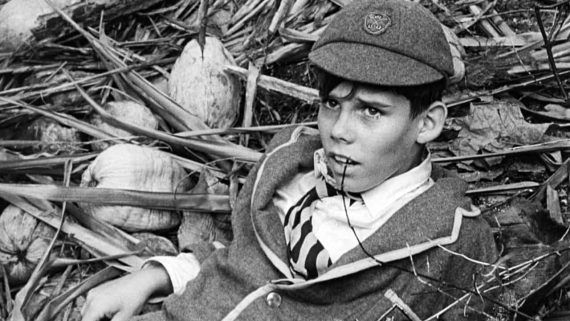 It’s a difficult novel to get right on screen, from a practical perspective as much as anything. Having to shoot on a location with potentially harsh and unpredictable weather conditions for one, and working with solely child actors for another. Luckily Brook pulls it off just about as well as anyone could, particularly given the low budget. The way he puts it in the extra features, the low budget was a Godsend in fact, as it meant producers were willing to let him do what he wanted as it was a low risk investment. At one point, when Sam Spiegel was attached as producer, the proposed budget was escalating and there was a risk that much of the novel would be scrapped, with girls being introduced to the story and the group making on a long trek to the top of a mountain for a triumphant happy ending.

Thankfully Brook persisted on pushing forward with the film he wanted, with a different producer (Lewis Allen) resulting in a unique production, using revolutionary equipment (one interview suggests it was the first time zoom lenses were used extensively on a feature as well as portable sound recorders). Inspired by the French New Wave, the film was shot on lightweight handheld cameras, allowing for more freedom of movement and a faster turnover. This was important for working with the non-professional all-child cast. They also had two cameras running at all times – one capturing the important key footage for each scene and the other capturing reactions and such, as well as any ‘happy accidents’ that occurred. This is all makes for a very natural and raw style which works beautifully with the source material (the night feast scene in particular is very powerful) and helps keep the performances of the young boys from getting stilted. Their line deliveries can still be a bit clunky though, given they were sticking fairly closely to the dialogue in the book. 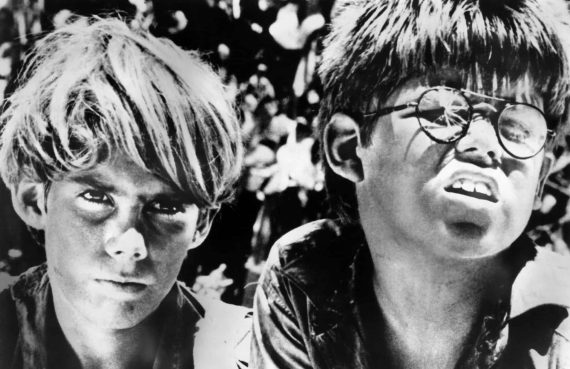 Speaking of the book, as far as I can remember, the film sticks very closely to the source material. A couple of things have been excised, but little left has been altered and it feels like a very faithful adaptation overall. It’s a novel which is open to several interpretations so the film, in being so faithful to it, naturally provides a lot of meat to chew on. I won’t delve into a deep analysis here as this review’s running on as it is and the book has been mulled over by greater minds than mine on countless occasions. On top of this, I dread to think how many millions of people around my age will have written their own essays on it during their teenage years at school, so I won’t bring back stressful memories.

I will say that the themes are still relevant. Schooling is different these days, so certain aspects have aged, but it’s still a powerful allegory of the universal nature of man, among other things. The film is a perfectly fitting rendition of the classic novel, with a rough naturalism to the presentation keeping it all terrifyingly believable. Fast paced, exciting and often quite disturbing, it’s a powerful film that has stood the test of time as well as Golding’s beloved novel.

Lord of the Flies is out on 28th August on Blu-Ray in the UK, released by The Criterion Collection. The picture and sound quality is excellent.

You get plenty of special features as usual for Criterion. Here’s the list:

– Audio commentary featuring director Peter Brook, producer Lewis Allen, director of photography Tom Hollyman, and Feil
– Audio recordings of William Golding reading from his novel Lord of the Flies, accompanied by the corresponding scenes from the film
– Deleted scene, with optional commentary and reading by Golding
– Interview with Brook from 2008
– Collection of behind-the-scenes material, featuring home movies, screen tests, outtakes, and stills
– New interview with Feil
– Excerpt from Feil’s 1972 documentary The Empty Space, showcasing Brook’s theatre methods
– Something Queer in the Warehouse, a piece composed of never-before-seen footage shot by the boy actors during production, with new voice-over by Tom Gaman, who played Simon
– South Bank Show episode featuring an interview with Golding
– Trailer
– PLUS: A booklet featuring an essay by film critic Geoffrey Macnab and an excerpt from Brook’s book The Shifting Point

It’s as extensive a collection of material on the film as you’re ever likely to get. There’s a little overlap here and there due to the volume of it all, but not enough to get annoying. Every aspect of making the film from pre-production to post-production was fairly unusual, so the content here is all genuinely interesting. The commentary and Brook and Feil interviews stand out in particular. I found the latter of these particularly interesting as it’s fairly technical, which appeals to the filmmaker in me.

All in all, another fine package from Criterion. Their lofty reputation is more than deserved.