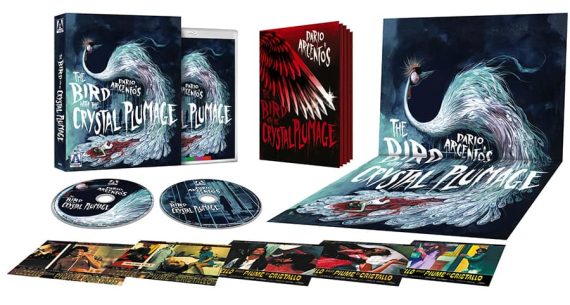 A startlingly confident and gloriously entertaining directorial debut from Italian master Dario Argento, The Bird with the Crystal Plumage (TBWTCP) not only see’s the birth of the auteur’s cinematic style but still holds up as a thrilling horror whodunit all these years later. While he’d been writing scripts for years (including contributing to Once Upon a Time in the West no less!), TBWTCP saw Argento call the shots for the first time and it’s often cited as bringing the Giallo genre to the masses. This grisly tale sees American writer Sam (Musante), who is based in Italy, witnessing the attempted murder of a young women in an art gallery late one night. The attack appears to be similar in nature to a spate of assaults on young women across the city by a knife wielding, black hat and coat clad assailant. With the ongoing police investigation proving fruitless, Sam becomes near obsessed in pursuing his own investigation, an investigation that may just bring him and his lover too close to the killer’s blood-thirst for comfort.

A straightforward whodunit narrative is injected with verve thanks to Argento’s assured direction and his now famous ability for orchestrating a nerve jangling murder set-piece. Like the more gruesome cousin of Hitchcock, Argento is a master at balancing high tension with shocking violence. TBWTCP has its fair share of the type of set-piece Argento would forever be associated with and while they may not be as elaborate as those seen in some of his later works, one can certainly see the foundation being laid here for the director’s flair for melding the beautiful and the horrific. Backed up by Vittorio Storaro’s (Apocalypse Now) opulent photography, means the escalating violence and murder, while ghastly, is often gorgeous to look at. Not least the gallery set-piece that sets the narrative in motion: a magnificently wide shot sequence that uses the two huge glass doors of the gallery to perfectly frame the attack.

Despite the dark nature of proceedings and the copious blood, there is a lightness of touch laced throughout; meaning TBWTCP has a more playful nature than some of Argento’s later work. Musante’s Sam is a likeable character and not as intense as say David Hemmings in Deep Red or Anthony Franciosa in Tenebre, and while he may have a somewhat cavalier attitude to all the death and dismemberment going on around him, it never impacts the forcefulness of the darker moments and provides needed light relief in-between the murder and mayhem. While the likes of the aforementioned Deep Red and Tenenbre (not too mention stone cold classic, Suspiria) are rightly seen as Argento’s masterpieces, TBWTCP (very much the blue print for these future films) rightly deserves to stand alongside them as it is essential Argento, essential Italian cinema and essential 70s horror. A superbly crafted slice of horrific Hitchcockian horror, which comes with a wonderful Ennio Morricone soundtrack to boot!

Arrow Films new eye dazzling 4K restoration comes to Blu Ray in the UK June 19th 2017 with a host of excellent features including
– a new audio commentary by Tony Howarth
– The Power of Perception: a visual essay on the cinema of Dario Argento
– a new analysis of the film by film critic Kat Ellinger
– a new interview with Argento himself
– reversible sleeve artwork
– a limited edition 60-page booklet
– and much more.