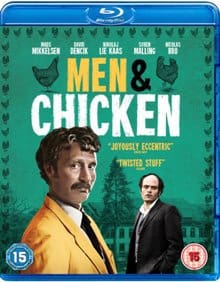 Brothers Gabriel and Elias (David Dencik & Mads Mikkelsen) discover they were adopted after their apparent father passes away. Elias’ mother died in childbirth, and the fate of Gabriel’s is left unclear, so the pair set out to discover their biological parentage. Their quest takes them to the small island of Ork, a place with barely 40 inhabitants, and a dilapidated house believed to be the home of their father. Upon their arrival, Elias and Gabriel face another shock when they meet their three other half-brothers, aggressive but protective Franz (Søren Malling), gluttonous Josef (Nicolas Bro) and simple Gregor (Nikolaj Lie Kaas). The brothers live in a state of disarray and constant fighting, which Elias fits right into, but Gabriel attempts to reform it, all while persisting to find his father and uncover the secrets of his mysterious basement. 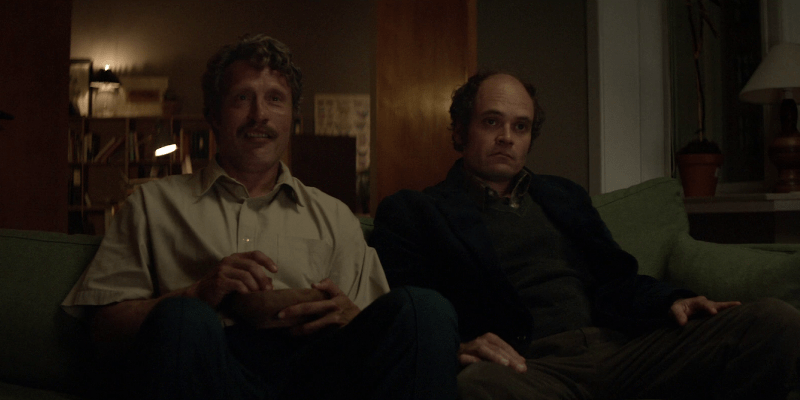 It’s true what they say, you can’t choose your family, but you can choose whether you accept who they are. Men & Chicken is a film about just that, acceptance. Acceptance of others into your home, acceptance of a different way of life, acceptance of who you are as a person. More than that though, it’s about accepting your limitations, at what you can and cannot do, and being OK with that. You see, before Gabriel and Elias find out they were adopted and aren’t even full brothers with each other, their respective lives were far from ideal. Gabriel’s partner left him three months ago, potentially because he is infertile and he has a bizarrely prominent gag reflex. He is also somewhat lacking in the friends and acquaintance department, something he blames on Elias’ abundance of personality, but which could also be down to Gabriel’s need to structure everything. Elias on the other hand spends all his time dating, suffering a chronic need to masturbate after the briefest of encounters with literally any woman. Oh, I should have probably mentioned, this is a weird movie, where a guy having a swift jerk-off in a toilet cubicle mid-date soon becomes a not all that absurd occurrence. When the pair meet their newfound kin, Elias sees it as a more-people-like-me situation, whereas Gabriel attempts to realise his philosophical potential to transform these unruly, uneducated miscreants into something close to respectable human beings. 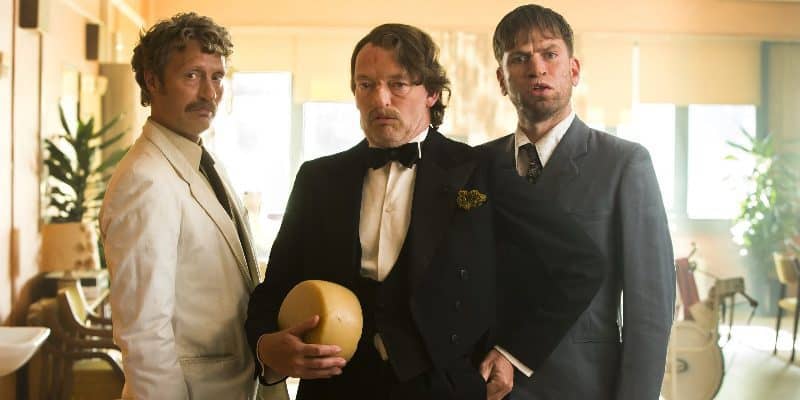 Those viewers only familiar with Mads Mikkelsen in his mainstream villainous roles like Casino Royale should delight at seeing him here showcasing an otherwise alien side to himself. There’s nothing sinister of Machiavellian to his Elias, if anything this could be the goofiest character Mikkelsen has ever played, and he does it phenomenally, even when not the focus of the scene. His gangly, flailing manner of running behind a tree for another post-female relief session is downright hysterical. Dencik too, perhaps best know for being part of the ensemble in Tinker Tailor Soldier Spy, is equally great in a slightly more understated role, but which carries and grounds the film in terms of credibility. In fact all the performances are terrific, particularly the remaining three brothers. They have a very realistic chemistry with one another, yet clearly distinguish each of their characters and ably perform through some exceptional make-up and prosthetics to “ugly-up” the brothers. 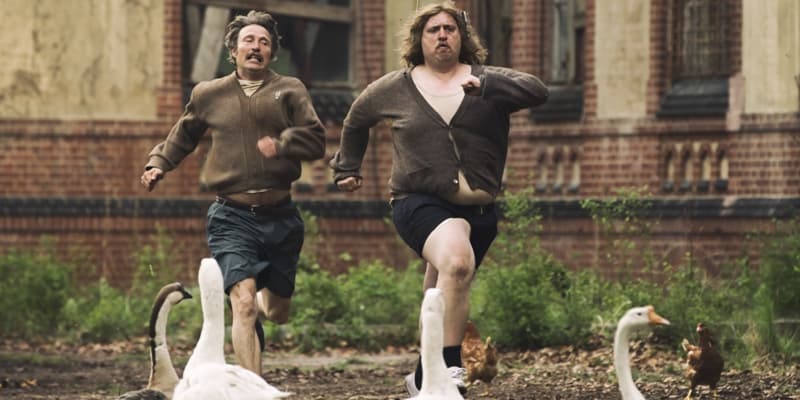 Story-wise a few of the puzzle pieces are blatantly hinted at and fall into place a little too early, but it’s still captivating watching the characters catch up to the audience, as their reaction promises to be fascinating, and there were still a few unseen twists bringing with them equal parts surprise, disgust and incredulity. To go into more detail would be to reveal spoilers, but rest assured there are things in this film that you most likely haven’t seen before, all presented with a gallows humour entirely fitting for the subject matter. Some elements are reminiscent of Yorgos Lanthimos’ excellent Dogtooth, especially with regard to outside forces heavily impacting an otherwise insular, oblivious household, so if that worked for you, then chances are this will too.

Men & Chicken is available now on Digital Download, and will be released on DVD and Blu-Ray by Arrow Films on August 15th 2016.