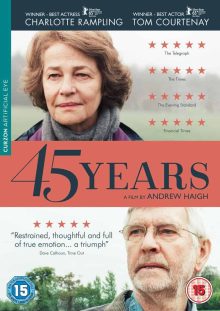 In a year in which 10 films took 39% of the box office, it’s probably fair to surmise that the march towards the bottom is continuing apace. Mid budget films are squeezed, talent migrates to TV, and so anything that is not a tent pole franchise or sequel is a thing to treasure. The danger in such circumstances is that critics rush to lavish undeserved praise on films that emerge on the festival circuit or even come out of nowhere. So the best time to take stock is with the DVD/Blu Ray release and with the perspective of a bit of time to reflect.

Andrew Haigh’s 45 Years is released on Monday having been hailed one of the best films of 2015. Kate and Geoff (played by the superb Charlotte Rampling and Tom Courtenay) are a retired, childless couple living in rural Norfolk. Succinctly we learn that Kate used to be a teacher and they appear to be relatively affluent, but before we can glean anything else about their existence a letter addressed to Geoff reveals a devastating truth from the past. This threatens to undermine the imminent 45th wedding anniversary celebration, but Kate bravely ploughs on, focusing on the minutiae of the party and encouraging her husband to be gregarious. After all, their planned 40th anniversary party was scuppered so their successful union needs to be celebrated for all to see. 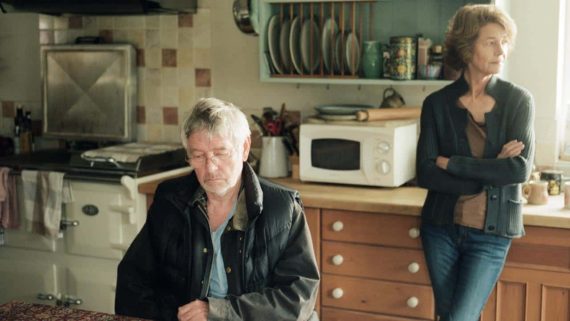 The writing and performances are superb. We learn so much through believable subtleties rather than any clunky exposition (the initial revelation notwithstanding), whether it be Geoff’s inebriated post-prandial rant in the car, or Kate’s expression after their first dance at the party. In fact, it’s pretty much flawless and leaves you thinking about it for days afterwards. And yet I couldn’t help feel slightly disappointed. Maybe it was because of the expectation of a bona fide masterpiece. Or perhaps it’s because the film is coldly brilliant, engaging the intellect but resolutely keeping you at an emotional arms length. I wanted to care more about the characters and feel for their predicament, rather than watching and understanding but remaining detached.

45 Years is certainly an impressive film and deserves to find a wide audience beyond the grey pound demographic. It’s essential, if not comfortable, viewing for film fans of any age.

45 Years is out on 11th January in the UK on DVD & Blu-Ray, released by Curzon Artificial Eye.