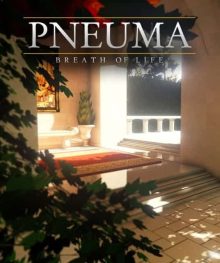 Hey guys and welcome to what I hope will be the first of many reviews on the Xbox Games with Gold. This month the first game available is Pneuma: Breath of Life, which is a first person puzzle game. I am quite excited about this game for two main reasons. The first of which is the pure simplicity of it. That said, do not mistake simplicity with it being easy. This game is set out in the same way as the Myst series of games where you start out with no instructions and learn the basic principles as you play through each puzzle.

So what’s it all about?

Well you start the game appearing in an empty space, void of light. As you move forward, a new world starts to develop around you and your character explains that he is God. This is where your journey begins through a world of puzzles and many mysteries. You are faced with many eyes which sounds odd but these are the keys to open various doors. This game is based very heavily in an alternative physics which I found has not been done so well since Valve released the gaming delight that is Portal.

Although this is not a long game, taking roughly an hour to complete, it shows a great level of thought from the designers who made this game not only in the detail of the graphics, which are absolutely breathtaking, but also in the puzzles that make this game the pure gem it is. The main reason I wanted to mention designers is because this is a true success story of six people who worked on this game from 9-5 in the day and took up night work to pay the rent. They saw a niche in the industry with the lack of jobs so decided to team up and create this game using the Unreal 4 game engine. They are currently working on their next game after the success of this one, having achieved a score of 4/5 stars on the Xbox store since its release on the 27th of February 2015, which I am looking forward to seeing.

At the beginning of this review I said that there were two reasons I was excited about doing this review. The second reason is the way that they managed to hit you with very well crafted character development. Throughout the game you hear the person’s voice as he discovers new things.  Due to the first person perspective, you never see his form which is usually a problem when you want to lull the audience into a sense of security with them, making us sympathise with a voice alone is very hard. This is not a problem for these guys to create and I say that simply because for me the hardest level in the game is the epilogue. There is no puzzle in it, you just walk through a woodland path towards the light. The reason it is so hard is due to the fear and panic in the voice as he realises his purpose in life. I almost didn’t want to finish the level through a feeling of pure guilt.

Is this game worth playing?

In my eyes this game is well worth paying the price for if you want an immersive game that will make you sit back and think about your actions whilst giving you a challenge. This game is currently available on Games with Gold until the end of the month. Enjoy.