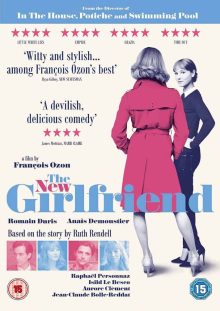 The New Girlfriend (2014) directed by Francois Ozon is a psychological drama starring Anais Demoustier as Claire. It is based on a story by the author Ruth Rendell.

Claire’s best friend since childhood, Lea, has died, leaving behind a husband David (Romain Duris) and their newborn baby. After the death of her friend, Claire calls over un-announced to see how David is getting on, to unexpectedly find David dressed in his dead wife’s clothes and feeding the baby with a bottle. David reports his wife knew about this part of his identity, although he has never shared his secret with anyone else. The shared secret acts as a bonding agent for the two characters, and Claire supports David in creating an alter-ego, Virginia. What unfolds is a development in their friendship, involving confusing dynamics. There’s a sequence of ‘feel good’ type scenes where Claire and Virginia go out in public and bond over shopping for clothes, flirting with men, and being generally ‘girly’. In the background are Claire’s husband, who seems so wrapped up in work he is oblivious to the amount of time Claire is spending with David, and also Lea’s parents who provide childcare on tap so David can have time to himself. Through this intense friendship, which revolves around both the secret of David’s alternate identity, but also the deceptions required so they can spend time together, the pair establish an unusual intimacy.

The tone of the film is bright, colourful, humorous, and full of pathos. At times there is a suggestion of more than friendship between Claire and David / Virginia, as well as a questioning of both David and Claire’s sexuality, as described in some key scenes where they go to a gay / lesbian / transgender night club to watch a transsexual karaoke singer. The film seems to suggest gender and sexuality are essentially social constructs that can be fluidly re-arranged in different permutations. For example man dresses as woman and takes on the psychological attributes of a woman; woman has an intimate relationship with a man who dresses as a woman and is consequently liberated to experience same sex attraction to another woman. 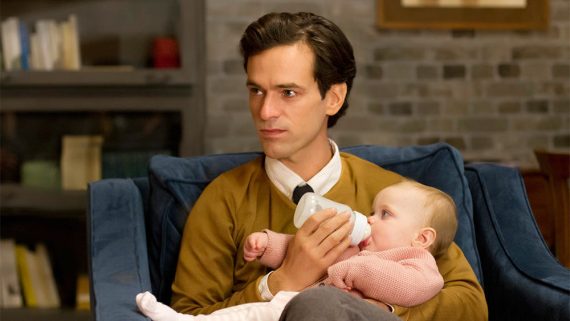 Whilst this concept is interesting, and would definitely warrant more in depth consideration, in this film it is delivered in a such a shallow and unbelievable context it seems ridiculous. The suggestion is that individuals are so constrained by their social conditioning they are blocked from exploring their gender and sexual ‘fluidity’. As a concerned viewer I couldn’t help thinking about the welfare of the child and the betrayal of the loyal husband. Ashamed of my concerns, and wondering if I was coming face to face with my inner right wing bigot, I made every effort to keep an open mind whilst watching this film. However, my end sense was the film is superficial, ridiculous, and lacking any genuine insight or in depth consideration. I enjoy a lot of French cinema, and have enjoyed other films by Francois Ozon, but for me The New Girlfriend is a disappointment, and in my opinion a bit of a turkey. Worth a watch if you enjoy films that are a camp and ridiculous perhaps, but somehow it even seems to fail on that level.

The New Girlfriend is out now on DVD in the UK, released by Metrodome.