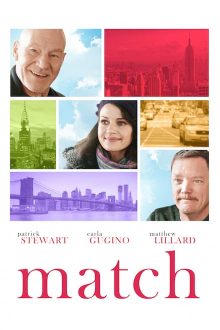 Sometimes a film comes along and just grabs you. It’s not because it’s got jaw-dropping action scenes in it, or it has a budget that could solve third-world debt. No, it’s because the acting and the script are so amazingly lifelike that you forget that you’re watching a film and this isn’t real life.

Match is the story of Tobi (Patrick Stewart) a 70-year-old ballet teacher at New York’s prestigious Juilliard School. As the film opens you witness him guiding his young, lithe students in a class and then see him head home to his nondescript apartment and then to a small and insignificant looking diner.

Here he meets up with a younger couple. The woman, Lisa (Carla Gugino), is apparently writing a dissertation about dance and she has arranged to interview Tobi. With her is her husband Mike (Matthew Lillard).

It’s here that the film really kicks off as we begin to witness Patrick Stewart at his very best. The man is such an amazing actor, he has much stage experience playing a variety of Shakespearean roles, but will always be more commonly known for his role in Star Trek the Next Generation, which I think is a shame.

In Match, Patrick Stewart is simply amazing as a man who has been through so much, is alone, which he finds enjoyment in, but at the same time he misses human contact. This comes out as the story unfolds and it becomes clear that there are other issues at play. 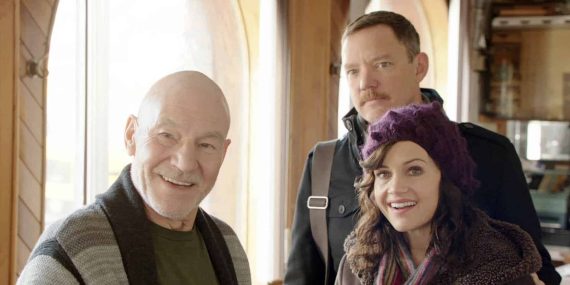 Stewart is more than ably supported by the excellent Gugino and Lillard who play a couple who are trying to deal with a number of issues that are clearly having an effect on their marriage.

Match has been adapted from a Tony-award winning Broadway play and that is clear from the way it flows, the witty and sometimes cringey dialogue and the amazing characterisation. It will make you laugh out loud but also smack you with “I can’t believe he just said that!” too.

It is a rare thing in a film to get so much depth in the characters when there is only 90 minutes to play with, but in Match you do. At the end you feel as though they are your friends and that they are part of your life.

Match is a beautiful film that takes you on a journey that you don’t expect. It will make you laugh, appall you and make you cry over the course of its 90-odd minutes.