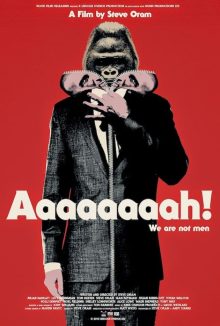 Aaaaaaaah! is the feature length directorial debut of comedy actor Steve Oram. A hard film to summarise, with no actual spoken dialogue, Aaaaaaaah! is based in an alternate world where everyone has gone ape. Actors convey meaning through grunts, and ape like gestures. The story plays out in a riot of anarchic physical theatre. The veneer of civilised society stripped away, the drama depicts a series of hierarchical struggles played out upon a non-descript suburban back drop. The struggles involve dominant and sub-dominant males and females vying for power. We observe how they both participate and manipulate their position in the group through aggressive, sexual, and occasionally affectionate behaviours. The drama is laced with dark and extreme comedy, and without giving away too many gags, there are scenes involving urination, defication, prosthetics and severing. So not one for the pious or the squeamish. 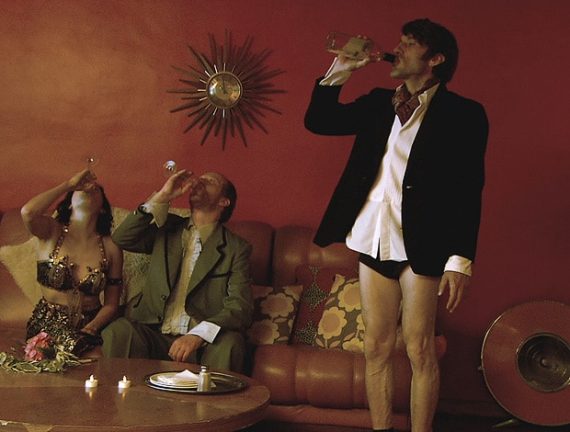 This is very much an ensemble piece, some of the actors involved include Steve Oram, Julian Barratt, Lucy Honigman, Toyah Wilcox and Noel Fielding. As there is no language, characters don’t really have names, at least not until the final credits. The film could be easily dismissed as a half-baked warm up exercise for an A level drama class, but it in fact goes way beyond the novelty of its form. It reminded me of both the novel Great Apes by Will Self, and the film Weekend by Jean Luc Goddard. As in both these works, the film depicts an alternate version of society where concealed hypocrisy is exposed and the savage intentions of the protagonists are conveyed in extreme satire. Very much in the spirit of anarchic British comedy and story telling, Aaaaaaaah! will appeal to those familiar with the films of director Ben Wheatley (Down Terrace, Kill List, A Field in England, Sightseers). In fact Steve Oram played one of the main characters in Sightseers and co-wrote the script.

The film is shot in a grainy low fidelity form, although it is brightly coloured, I’m guessing to enhance the cartoon like satire being played out. There is a wonky soundtrack credited to the band King Crimson Projekt (progressive rock supremo Robert Fripp being one of the core members). I found this film original and satisfying, for fans of left field British cinema that doesn’t take itself too seriously, but also not scared to pack a dark macabre punch. Worth a go.