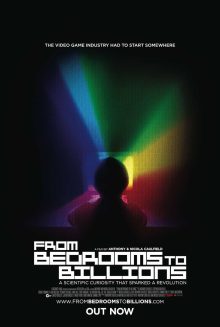 From Bedrooms to Billions is an independent documentary looking at the birth and growth of the British video games industry, funded by an Indiegogo campaign run by its producers/directors/writers, Anthony and Nicola Caulfield. Speaking to a vast number of those involved, the pair tell the story of how young geeks figuring out how to make basic games on the first home computers like the Sinclair ZX80, Spectrum and BBC B/Micro went on to build a small cottage industry out of nothing which went on to be an important driver of what is now the biggest entertainment industry in the world.

When I first saw the film advertised I thought it looked like your standard nostalgia trip, the likes of which you see filling gaps in TV schedules, but being a child of the 80’s who grew up alongside video games (although I’m a little young for the Spectrum, I came in with the Acorn Electron then the Amiga), I couldn’t resist going along for the ride. However, I quickly came to realise that this is actually an exceptionally well researched and constructed documentary which truly charts the history of the movement. It’s not a throwaway piece simply glazing over and making do with playing clips over quotes saying how great all these games were. This is especially apparent in the sheer number of contributors the directors managed to interview. The list is exhausting, taking in well known figures such as David Braben (co-creator of Elite) and Peter Molyneux (Populous, Dungeon Keeper, Theme Park, etc.) as well as those involved in video game music and art design.

It’s a fascinating story too. I was well aware of how games and consoles have developed over the last 30-odd years, but I hadn’t thought about where it all came from. The film makes you realise just how wild and avant-garde it was. When the first systems came out, there weren’t any games available. You didn’t have shops in every high street stocked to the roof with them. You had to programme your own games by typing lines and lines of code. Many of the first home games would be found in magazines that would publish the coding for them. The people who developed the industry were largely youngsters barely out of school (some still in it), who had no business knowledge, so it was a crazy mess in its infancy. It all began of course in the pre-internet days so it was truly underground at first and grew through magazines and word of mouth. The film does an excellent job of appreciating how this happened. 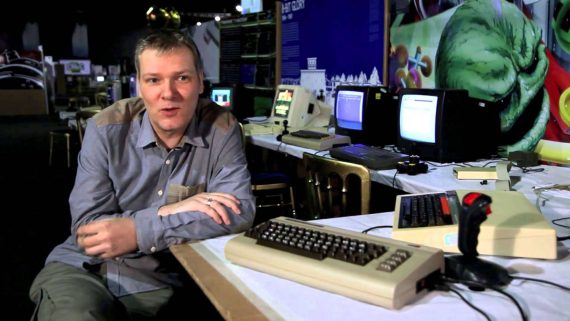 What also impressed me was how the film rockets along. When I noticed the running time (a hefty 150 minutes), I was a bit put off. Could a talking heads documentary about old video games really keep me interested over two and a half hours? Well yes it certainly can. Instead of settling back and basking in the love of any particular games, the film sticks to its guns, instead telling as much of the actual story as it can. With so many different interviewees, the soundbites are all pretty short too, which pushes the pace forwards. It’s truly a great piece of editing as there’s no voiceover to rely on to keep the focus true, the interviews drive everything and I can’t imagine how many hours worth of footage they were working with.

On the down side, there are some minor technical issues. It’s a low budget film, so it’s forgivable, but the sound recording and mixing isn’t always consistent, with a couple of interviews taking place at trade shows for example so the background sound is a bit strong and occasionally the music seems a bit too loud compared to the dialogue. Also, and this is being really picky, some of the shots looked a little over exposed, but it could be a style thing (I was trained up in news camerawork and editing, so I’m a bit of a stickler to the rules). Otherwise, the film looks very good for an independent production though and the music is well sourced, using a couple of well known tracks from the period (New Order’s Blue Monday) as well as some video game soundtracks and specially commissioned music.

As a documentary it’s not breaking any new ground, sticking to talking heads and period footage (as well as game clips of course), but nevertheless it’s a dense, well constructed, engrossing film that is more than the nostalgia trip you may think from the description. It is filled with shots and sounds from those classic games though so will still appeal to those looking for a retro gaming fix, but you’ll come out with much more than that. Rattling along at a fast pace, it’s great fun to watch too, even for those with only a passing interest in video games.

From Bedrooms to Billions is out now on DVD and Blu-Ray exclusively at Funstock.co.uk. I watched the Blu-Ray version and the picture quality was solid, although I think I spotted some frame rate issues, but nothing major. Audio is solid too (other than the mixing inconsistencies mentioned in my review).

The film is available in both Standard and Special Edition versions in both formats (as well as Limited and Collector’s Editions with extra posters/prints etc.). I was sent the Special Edition, which is retailing at quite a premium above the Standard Edition, but I must say it’s certainly worth the price hike as you get a whole other two and a half hour film! Actually a series of short documentaries on the making of various classic games as well as pieces on game music and other specific aspects of video game history, I happily sat and watched the whole bonus disc as a second film which is equally as good as the documentary it’s packaged with. It’s a fantastic addition as I imagine big gaming fans might feel hard done by from the main feature in terms of specific tidbits about the classic games they love. These short documentaries really go into detail on the making of specific favourites such as Elite, Populous, Manic Miner, Speedball II, Sensible Soccer and many more.

And if all that weren’t enough, the makers have thrown in a feature length commentary with the main documentary. It’s not mentioned on the website, so I’m not sure if it’s included with all releases of the film, but it was on my Special Edition Blu-Ray. The two directors are joined by a couple of the contributors (sorry I missed their names), so it’s a group effort that doesn’t lose steam (although I must admit I’m still listening to it now so haven’t got to the end yet). It adds even more detail to the history of the UK game industry, in case anything had been missed, with plenty of fun anecdotes, geek chat and information about the production of the documentary.

So all in all it’s a very impressive set which I would thoroughly recommend, particularly in its special edition form.