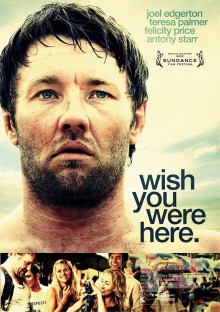 It’s not often that a film really grips me. Wish You Were Here, however, did just that. It’s a film that really drags you in and makes you feel as if the events are happening all around you.

Although it, thankfully, doesn’t star Judith Chalmers, Wish You Were Here is about a holiday. However, it isn’t a holiday that goes that well. Dave and his wife Alice, her sister Steph (Teresa Palmer) and her new bloke Jeremy (Antony Starr) take a short break to Cambodia. The trouble is Jeremy goes missing, Dave and Alice go back to Australia and then Steph has to come home too without Jeremy.

Once back in Oz it soon becomes clear that on top of Jeremy missing there is more going on. This begins to creep out and it all starts to make an already tense situation even more so.

The two leading actors Joel Edgerton (Dave) and Felicity Price (Alice) are great. As a married couple they carry off the sort of anger and tension, coupled with love that only a married couple can have. You can see real distress in their faces and actions and although you can see some of the plot changes coming, the way that they are dealt with a played out on-screen is utterly convincing. It would have been so easy for them to descend into screaming, hate and throwing things, but director Kieran Darcy-Smith handles it in one of the most believable ways that I’ve seen on film. 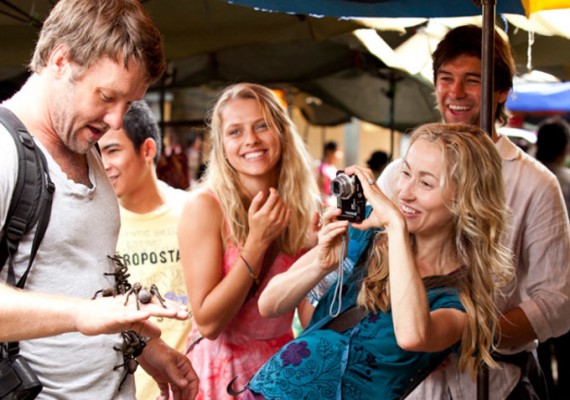 The story is told in a mix of real-time and flashbacks. Some of these are prompted, a character recalls events that happened on the trip to Cambodia, for example. However, most of the time they are just dropped into the flow of the film. I would say that, on the whole, the pace of the film is excellent. That said the flashbacks can get a bit confusing as you’re not always sure when, in time, the events are happening.

Wish You Were Here is beautifully shot, clearly on location somewhere in south east Asia, hopefully for the sense of accuracy in Cambodia with some great market scenes and some beautiful beaches. This wasn’t a big budget film by any means, but the money that was spent was spent well.

When it comes to creating tension in a film, Wish You Were Here that you don’t need tons of gore, supernatural beings or CGI to keep the viewer interested. Thrillers can be created with a good script coupled with good acting and direction as is the case here. And no the irony of the title wasn’t lost on me either, you certainly won’t wish to be in their shoes.

Wish You Were Here is released on May 12th in the UK on DVD by Metrodome.