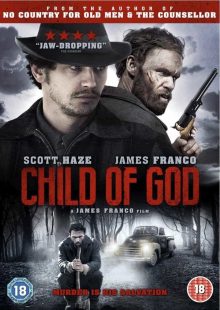 Based on the book by No Country for Old Men, Pulitzer Prize winning writer, Cormac McCarthy, Child of God is an interesting film that sheds more light on the sort of person director, writer and actor James Franco is than anything else.

Child of God is about social outcast Lester Ballard (Scott Haze) and is set in 1960s Tennessee. From the outset we see that Ballard isn’t all there as he has a run-in with some locals and he doesn’t come out of the situation well. After this run in he retreats from society, setting himself up in an old shack in the woods. What follows is a series of events as Lester’s behaviour becomes ever more extreme.

The character of Ballard that Haze and Franco created is stunning. He is utterly repulsive and you can’t have any positive feelings for the man. It really is an amazing performance by Haze, but other than that there isn’t really much else to the film. It is basically an analysis of how low someone can sink, but also how damaged the human mind can get.

One criticism of Haze’s portrayal of Ballard is that at times it is hard to know exactly what he is saying, you do just about get his drift. His actions are quite shocking too. This is the first film where I have seen someone do what bears do in the woods with such graphic representation and then proceed to wipe their backside, or smear it, with a stick.

James Franco isn’t your typical Hollywood leading man/director. He is known for trying his hand at many things, including directing, and he is clearly good at it. Oscar nominated for his part in 127 Hours, he writes, has art exhibitions and has recently been completing a post-grad course at Columbia University in New York. Movies for him aren’t always about CGI and big explosions (Spider-man 1&2, Oz The Great and Powerful) as is proved here. 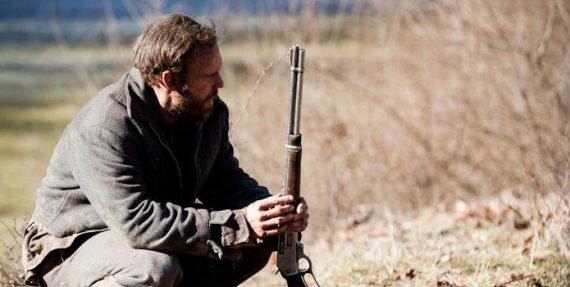 The trouble is, other than the character of Ballard there isn’t much more to the story. The characters of the police are of minor interest, but they are a little cliched for small town law enforcement. The only questions you have are: what will Ballard do next and will he get caught.

What does sit rather strangely are the various voice over narrations in the film. You don’t know who is is speaking, although they are supposed to be people who have had encounters with Ballard. Also, to help the story move along, Franco drops in oversize captions on to the screen. At first I thought these were just badly framed, but it seems they are meant to look like that. They do actually help as well.

Child of God is an interesting film with an amazing performance from Scott Haze that is truly worthy of praise. He is an amazing talent and the film is worthy watching for that alone. James Franco also shows that he has a talent for directing as well as acting, although he doesn’t do a lot in this film; blink and you’ll miss him.

Franco is clearly more than your run-of-the-mill Hollywood types. Put these two together again with a bit more going on than a man going primeval and crazy and then they could well go a long, long way.

Child of God is out on DVD in the UK on April 28th, released by Signature Entertainment.