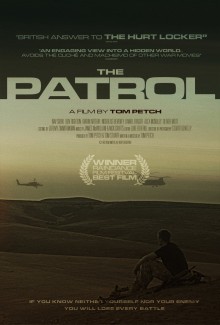 War, huh, what is it good for? Although Edwin Starr’s lyrics were rhetorical, one answer could be films. In the 1980s Hollywood went to town with Vietnam movies. In the late naughties we had a fair few Iraq war films and now as we move through the teens we get Afghan war films. The Patrol is a British entry into this sub-genre.

As you would expect, given the name of the film, The Patrol is about a group of soldiers out in the scrubland and desert of Afghanistan. Whereas all those 80s movies depicted the Vietnam theatre as that of endless jungle, so the modern war movies are set against a sandy backdrop that TE Lawrence would have been at home in.

For filmmakers this proves a problem in terms of locations. It is fairly straightforward to make a group of trees look like a jungle, it’s not so easy to make a sandpit look like a desert. Locations are everything in a film like The Patrol otherwise any kind of atmosphere of war is impossible. Thankfully for The Patrol, director Tom Petch manages this thanks to the North African stand in for Afghanistan. This and the accurate vehicles and equipment all combine to make it convincing and appear to have a much larger budget than it most likely had.

As well as being well made The Patrol is on the whole well written and acted. The only issue I have is that it falls into the trap of all films that have different ranks; that of insubordination. Every cop show has a maverick cop who doesn’t listen to their superiors or do as they are told and the same is true of many war films too. Although this is, of course, to make the TV show/film interesting, after all goody-goodies aren’t interesting, it isn’t very accurate – particularly in the army. I won’t go into details so as not to give too much away. 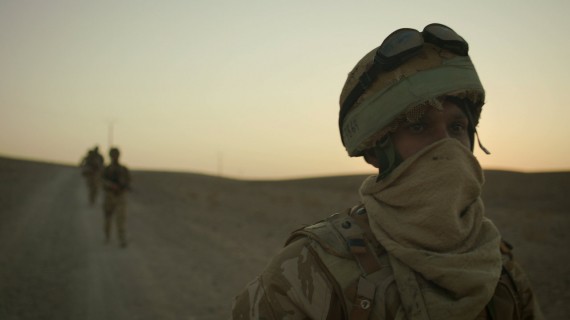 The other issue I have is that the film has the occasional voice-over that doesn’t seem at all necessary and for the most of the film you don’t even know who it is talking, or who they are talking to. You, sort of, find out who it is at the end, but even then it’s not really needed.

The Afghan war won’t go down in history as one of the best examples of British military action, many people in Britain have never been that convinced by it, to say the least. However, on the whole we do still have respect for the honest Tommy serving his country, even if we don’t agree with the war they are serving in. It’s the depiction of the long suffering squaddie that is The Patrol’s strongest asset. You may not agree with where they are and what they are being paid to do, but The Patrol will leave you respecting them nonetheless.

On the whole The Patrol is an OK film. It panders to some well worn issues about the Afghan war, but doesn’t really have that much to say. In some ways it does feel as though it was made just for the sake of it, rather than because the writer and director had something they wanted to get across.