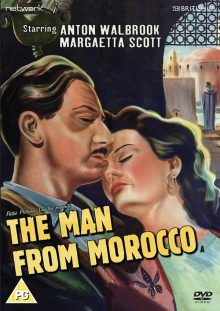 They just don’t make films like this anymore. The Man from Morocco is a British film that although dated in parts still manages to retain quite a lot of charm.

The film starts with a group of the international brigade, foreign soldiers fighting in the Spanish civil war. It’s estimated that as many as 35,000 men went to Spain to fight against Franco’s fascists and the hero of the film Karol (Anton Walbrook) is the unofficial leader of the group.

Whilst trying to leave Spain, following the loss of the war, the group is making its way to France to escape when they come across a building where they seek refuge. They think that it is empty, yet when they get there they meet Manuela (Margaretta Scott), a beautiful Spanish lady who has an ill brother. Karol and Manuela hit it off immediately but Karol has to leave as he is in danger if he stays in Spain.

The group finds its way to France, but by the time they get there the country has been conquered by the Germans and they are interred by the Vichy French in a camp for political refugees. After a few twists they end up in Morocco, hence the name of the film, but that’s not where the action ends.

I won’t go into any more of the story, only to say that there are a nice amount of changes of direction to keep you interested.

Watching the film you instantly see how far films have come in the last 70 years. The acting is a lot more pronounced, theatrical, camp and over the top. They don’t just look distraught, but throw their arms up and hands over their faces just to make sure you know how distraught they are. There are stereotypes and cliches galore, mostly in the character of Jock, who is unsurprisingly from scotland and uses the phrase ‘bonny’ a few times too often. He also manages to mention kilts and haggis!

The lighting is also different to modern films. The film is in black and white and on quite a few occasions the character on screen is shown with their face in shadow. This was probably a stylistic device in the day, but now it looks odd as it means that you can’t see the actor’s face!

The Man from Morocco is the sort of film that is perfect for a lazy Sunday afternoon where you have a stomach full of Sunday lunch and maybe a glass of wine or two. It’s a view into a long gone age of British cinema and is thoroughly enjoyable.

The Man From Morocco is out now on DVD in the UK, released by Network Releasing.