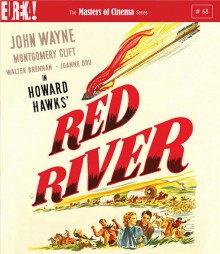 I have a similar relationship with the western as I do with film noir. I profess to loving both genres (my all time favourite film is a western – Once Upon a Time in the West), but I haven’t seen nearly enough of them to truly justify my ‘fandom’. In my formative years as a film lover (around 15-20 years ago) I worked my way through the big name westerns like The Searchers, Stagecoach and The Wild Bunch (another film very high in my list of personal favourites), but I never explored the genre properly. In my naïve youth I guess I stuck a little too closely to the official canon of ‘greats’ so felt I’d already hit the top of the list and didn’t need to dig any deeper. I also developed a great love of the Sergio Leone spaghetti westerns, and dismissed many of the early Hollywood entries as less thrilling or stylish.

So there have always been huge gaps in my western knowledge. Recently I’ve been trying to rectify this though, largely due to me finally getting around to one of James Stewart’s collaborations with Anthony Mann, Winchester ’73. I adored the film and I’m trying to work my way through the others they did together as well as go back to the numerous great Hollywood westerns of the era. Eureka’s superlative DVD/Blu-Ray label Masters of Cinema has helped with my quest by releasing a handsome new Blu-Ray of Howard Hawks’ Red River, one of the many classic Westerns I hadn’t yet seen.

Red River sees John Wayne play Thomas Dunson, a man who settles on a piece of land in Texas with a bull and a cow. With the help of an old friend (Walter Brennan) and Matt (Montgomery Clift once he grows up), a boy he takes under his wing, Dunson turns this meagre start to a mass of cattle several thousand strong. Unfortunately all of this livestock isn’t actually earning him any money, so he decides to drive the herd on a long and treacherous journey to Missouri, where he can sell the beasts for a handsome profit. The journey and Dunson’s troubled past get the better of him though and as he becomes more ruthless and cruel, his ranch hands and Matt turn against him, taking the herd elsewhere. Dunson swears revenge and along the way Tess Millay (Joanne Dru), a feisty young woman, gets involved with matters and attempts to put an end to the feud.

This is a fine example of a good old-fashioned oater. Featuring an exciting and violent scuffle with some Native Americans at the start of the film (which was made in less PC times), I thought I was in for a blistering action western, but this is actually more of an epic family drama. This isn’t a bad thing of course, but the action fan in me felt slightly let down when it dawned on me. Nonetheless, coming from the great Howard Hawks the film is still a lot of fun and there are a couple of set pieces that are more than thrilling enough. The most famous of these is the cattle stampede in the middle of the film. There’s great use of sound and tension in building up to the event and, especially considering it was made long before Lord of the Rings or World War Z style CGI ‘swarm’ effects, the enormous waves of cattle flooding the screen are pretty terrifying and spectacular. You even get a couple of shots right in the thick of it which must have been risky business with those big, expensive cameras. 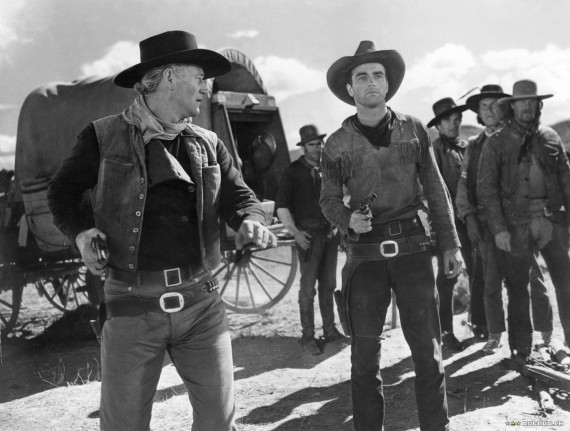 There’s plenty of snappy dialogue too. It takes itself more seriously than Hawks’ screwball comedies of course and doesn’t quite have the crackling wit of The Big Sleep, but there are still some cleverly suggestive comments made and lots of enjoyable banter between the farm hands and especially in scenes featuring the fast talking Tess.

The writing in general, as well as the direction, is pretty taut despite the lengthy running time. At over two hours it’s admittedly not the fastest moving of westerns, but there is little wasted celluloid as the story rolls along. What really sells the film, on top of the pretty landscapes, exciting set pieces and witty dialogue, are the characters. Dunson in particular is fascinatingly flawed. It’s great to see Wayne playing a character that isn’t a cut and dry good guy (a feat repeated in The Searchers almost a decade later), in fact he pretty much becomes the villain as the film moves on. Wayne, a little like Schwarzenegger, isn’t known for being the greatest actor of all time but can carry roles through shear presence and star power. Here he does a fine job though and it ranks among his best performances. Tess, although only appearing in the final third of the film, is a strong character too. The writing and Dru’s performance are crucial in selling the potentially very cheesy resolution to the story and the parallels between her and Dunson’s long lost love are well integrated even if they’re a little blatant.

On the whole it’s solid Hollywood entertainment at its best. It may not be quite as punchy as some of Hawks’ other classics and has its predictable moments, but with healthy doses of humour, romance, drama and excitement, it’s a fine example of the golden age of Hollywood.

Red River is out on now in the UK on Blu-Ray, released by Eureka as part of their Masters of Cinema Series. The print shows its age a little at times especially at the start with a bit of fading early on, but on the whole the transfer looks decent. Audio is crisp and clean.

The main extra feature is a lengthy video conversation about Red River and Howard Hawks by filmmaker and critic Dan Sallitt, conducted by Jaime Christley. Also included is a theatre adaptation of the film from 1949 which features John Wayne, Walter Brennan and Joanne Dru.

Added to this you also get a music and effects track as well as a trailer for the film and, last but not least, one of the usual Masters of Cinema booklets which contains essays on the film as well as a couple of transcribed interviews with key crew members. These are particular interesting as they look at varying opinions of the changes that were made to the film’s ending. Screenwriter Borden Chase claims Hawks butchered his script and ruined the finale, but Hawks replies with “He must have been drinking when he wrote this because he’s so full of shit.” Needless to say, it all makes for great reading.