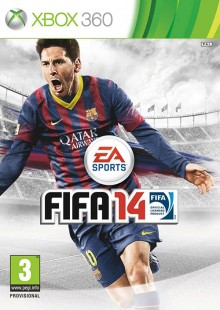 ‘It’s a funny old game,’ commented Jimmy Hill once, on football. Well itchy chin to you, James, because with Electronic Arts involved, football is neither funny nor old.

Not ‘old’ with a new game coming out as regularly as, well, October anyway. The players have barely had a chance to settle into everyday life (punch someone in a night club, design some pants, fireworks in the bathroom) before they are tossed into a virtual thresher while newer versions of themselves arrive in the next game.

And neither is it funny, as EA has ensured since it got FIFA ‘right’ on this generation (FIFA 10, fact fans), and created a giant money spinning behemoth.

Loaded to the gills with game modes and options, FIFA 14 is bursting with different ways in which you can enjoy the game of gentlemen. Quick Play allows you to jump in and hit the turf running with whichever teams you want (almost literally) with a pinch of pre-match tactical adjustment thrown in.

For others similarly impatient, but not actually wanting to play a game of football, you can try your hand at the various skill games, which range all the way from quite good to seemingly pointless. It’s always nice to see how you stack up against online friends though.

FIFA Ultimate Tournament (FUT) seems to get more attention from EA with each passing update, possibly because it’s the only thing that FIFA players spend extra cash on, mainly in order to buy in game currency that leads them on to the purchase of cards with a higher chance of good players.

For those not in the know, those cards I mentioned come in virtual blind packs, which you buy with your EA bucks. Player cards are used to make up your football team while skill cards and temporary boost cards throw in a tactical element during the 90 mins of play.

As one can imagine, the temptation to spend a few pennies on improving your FUT team, as opposed to grinding out the virtual cash, can prove too much for some, and, as mentioned, it’s here where EA has generated a revenue stream. It would be unfair to call it a rip off, because it really isn’t. FUT is a genuinely novel and immersive aspect to the FIFA games that rewards patience and diligence. Just not as richly as it rewards people who spend actual money.

Finally, there’s Career Mode, which is this reviewer’s favourite. A veteran of Master League mode back in the PS2 PES days, I’ve always been a fan of the player/manager dynamic which these modes throw up. You pick your team, sign the contract after managing the board of directors’ expectations for the season, and away you go. 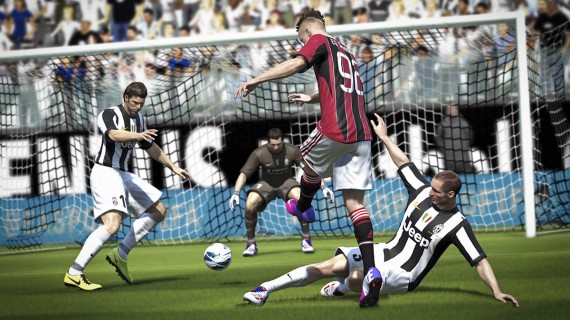 Career Mode is pretty well done, to be fair, from basics like squad formation and transfer windows, to the finer details like dealing with unhappy players and getting involved in the cut and thrust of pre-match bluster (tip: always be nice; don’t try to unnerve your opponents, I swear it always makes them play better.)

As for the game out on the pitch, there’s a noticeable difference in the pace of the game, as in it’s faster, which make it less realistic as a field game but a lot more fun as a video game.

The physicality is also ramped up, with players attacking and defending more aggressively, most notably so with the one on one foot tackle, with some players making second, more desperate attempts, should the first one not be successful.

Ball physics are lighter and the accuracy is tighter, meaning more (yet not a ridiculous amount of) efforts from range find their way to the target.

This is all very well, for some, but FIFA 14 is hardly a game built from the ground up, and many ‘different’ areas feel like the airtight FIFA 13 with some of the more tightly wound screws undone a little. FIFA 14 seems to want you to have more fun than in the last few iterations.

It’s no coincidence that there’s a new generation of consoles hitting the shelves (and the floors/walls of Parcel Force depots up and down the country) this November, and you can bet that EA has been working jolly hard on that version. You could almost forgive them for phoning in this current gen effort but it would be unfair to level this accusation at them, given not just the aesthetic changes but also those physicality improvements on the field of play.

A fine effort, then, and perhaps a nod of respect from EA to the old timers PS3 and Xbox 360. Let’s just hope it maintains this attitude for next year’s release, as we feel the uptake to next gen will not be quite so fervent this time around.