I got my first taste of anime back in the late 90’s when I picked up cheap DVD copies of the classics Akira, Ghost in the Shell and Ninja Scroll (in that order I think). Back then not a huge number of anime films/series had made the journey over to the UK, so I never amounted a huge number of titles in my collection. Having to import dodgy copies of things like Neon Genesis Evangelion and Cowboy Bebop proved a little too expensive for a college student (and the quality of these ‘imports’ was variable), but I fell in love with the genre nonetheless. The elaborate and sometimes confusing plots, often mixing teenage melodrama with philosophy (cod or otherwise) made a change from the bland, well-trodden narratives of your average blockbuster. Then there was the style. Granted, the TV series’ and lower budget anime didn’t have the smoothest animation or most detailed character designs, but they made the most of their limitations to deliver true feasts for the eyes. Plus, for an action junkie like myself, my craving was often satisfied by blood spurting violence or epic robot/monster/super-powered showdowns. When I discovered the joys of Studio Ghibli and Hayao Miyazaki through the release of Princess Mononoke I also realised there was more to anime than 18-rated violence and brain melting sci-fi.

But then the fever died down. I wouldn’t say I fell out of love with the genre/format, but I was always into the films more than the series (other than the aforementioned classics) and over the years fewer and fewer of these seemed to get made, so I watched fewer and fewer. Anime became more about long-running TV/OVA series’ and I didn’t have the time or money to work my way through several box-sets worth of material. So, other than the occasional excellent Ghibli release and the odd cheap OVA box-set I’d find, I never become the otaku I expected to become. 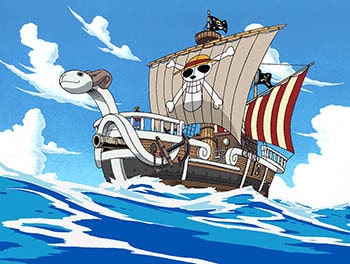 I’ve started to miss the mind-bending, unusual and stylish world of anime recently though, helped by the Japanese festival Blueprint put on at the start of the year. So, seeing as I tend to watch review screeners more than anything else these days, I figured why not bite the bullet and start getting some anime featured on Blueprint: Review, even if it might come in TV series form. Manga have finally started to release the popular series One Piece on DVD in the UK and it’s not one I’ve seen, so I sat the 4-disc set next to my TV and have been working my way through it over the last few weeks.

One Piece follows wannabe pirate Luffy as he heads off towards the treacherous Grand Line to find and retrieve the infamous ‘one piece’, the world’s most valuable treasure, left up for grabs after the death of the legendary pirate Gol. D Roger. More important than the wealth gained from taking this treasure, Luffy wants to achieve the honour of being ‘king of the pirates’ by doing what no other pirate has managed since the death of Roger. Being such an arduous and uncharted journey, he must amass a crew and this first collection of episodes is largely made up of him helping oddball characters along his journey and convincing them to join him in his quest. These include the sneaky thief and navigator Nami, the world’s (second) greatest swordsman Roronoa Zoro, lovable liar Usopp and the fiery chef Sanji.

There are 26 episodes in the set, but really there are maybe only about 6 or 7 stories, made up of a number of episodes and these generally set up a new character to join the crew (other than one or two brief random excursions). These tend to follow a similar pattern in terms of Luffy and crew arriving at a new location, a character’s backstory being revealed and a evil pirate crew arriving that needs to be dealt with. However, the series gets away with this repetitive nature by throwing in a host of unusual characters with quirky skills or issues. The pirates for instance are always wonderfully bizarre. There are cat pirates, one of which fights with enormous claws, clown pirates with a leader whose body can separate and the ultimate swordsman who can split ships in half with a single slash. Even the central character Luffy is by no means normal. After eating one of the ‘devil fruit’ as a boy (the source of many of the quirkier characters’ powers), he has become a rubber person whose limbs can stretch and squash, meaning he is practically invincible (knives/swords and drowning can still stop him though).

It’s this imagination that prevents the series from becoming another straight-forward kids action series. There are plenty of nice visual flourishes too. Being a TV series, it doesn’t have the money or time to do anything too elaborate and the general look isn’t anything special, but in more dramatic or action-orientated scenes the style often changes, making for a dynamic and exciting experience from episode to episode. 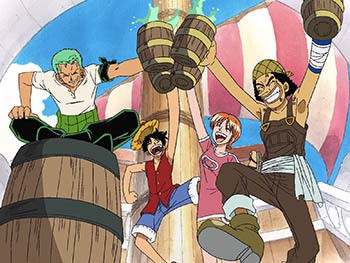 Speaking of dynamic and exciting, the series consistently plays out in high gear, employing a fast, energetic pace throughout. There’s a lot of humour and even in its goofier moments it’s pretty funny, if hardly witty or intelligent. Its quirky imagination plays a part here once again. There’s a huge amount of action too, with pretty much all episodes containing a showdown or two to keep the adrenaline pumping. These are well executed, with a variety of techniques used to keep things interesting (although Luffy tends to use his handful of ‘gum gum’ moves an awful lot). It even gets pretty violent, with the blood quota building as the series moves on.

It can get a little repetitive, and there’s a tendency to drag bigger battles out over a few too many episodes, wasting time by pausing for everyone to admire the ‘special move’ somebody’s brought out. This is all part of the territory though and anyone familiar with this style of action anime will expect it.

Despite a few niggles, this is great fun throughout though. Whenever I planned to watched one or two episodes it would turn into four or five. This is largely down to the extended story lines, but also due to the infectiously fun tone and endless imagination of the writing and design. Those not attuned to the genre or format won’t be won over maybe, but if you like a bit of zany action-packed anime in your life, this is one of the best places to find it.

One Piece: Collection 1 is out now in the UK on DVD and Blu-Ray, released by Manga. Collection 2 has also been released recently and I imagine (or at least I’m hoping) Manga will be steadily working through the 15 series that have been produced and beyond.

Picture and audio quality is strong, I never noticed any problems. You can skip intros and outros easily which is handy for shows like this when you want to watch a few in a row. Extra features-wise you get a couple of staff commentaries, textless versions of the opening and closing songs and trailers.